Blood on Their Hands

And nothing ever happens to them.

As of this recording, another day has gone by, another day where no bishop in America has come out and publicly stated that the root of the problem among the bishops is homosexuality and its acceptance.

Everyone knows it, just like no one believes Cardinals O'Malley, Wuerl and Farrell when they say — or sneakily imply, in the case of O’Malley — that they knew nothing, that they were shocked. If there's anything worse than being lied to, it's being lied to when then liar knows that you know he's lying.

So let's examine the case of Cdl. Sean O'Malley and look at what he knew and didn't know and how he reacted. We know, from his own statement, that his staff got a letter, a letter he claims he personally never received, but his staff did. Notice that he doesn't deny knowing the information in the letter, just never having received the letter.

Wonder how much collection plate money was spent on the lawyer who came up with that convoluted language?

Anyway, the cardinal would have us believe that a letter came into his office written by a man who said the most well-known cardinal in the United States — a money-making machine — was a homosexual predator and had raped and assaulted seminarians in a beach house, and no one on the staff breathed a word of it to their boss — right.

Yep, O'Malley, who has been good friends with McCarrick for decades, was left totally in the dark by his staff about this horrendous claim. That's what he wants you to believe, that is the heavy implication from his statement. He thinks you are all idiots, as do so many of the other prelates lying and laying back about this, hoping they don't get implicated.

Well, there's a good reason O'Malley wouldn't want to admit to knowing any of the facts of the case. Never dreaming all this was going to come out and explode across the Church in the U.S., O'Malley,  three months later the letter, took McCarrick on a trip to Havana, Cuba.

He wrote about it on his blog and even posted pictures, even calling McCarrick "wonderful." But just a few days before that, he had him at a big gala dinner that raised about $2 million. Both of these events, as well as others they associated at, occurring after the letter was received by O'Malley’s "staff" the staff that didn’t breathe a word to him about the contents.

What makes this — as well as Wuerl's and Farrell's denials — simply unbelievable is that, had this not all come out, it would just be business as usual for them. It's always that way — nothing — absolutely nothing changes until a victim bravely comes forward and the media finds out. Then, and only then, do all the expressions of sorrow and sadness and crocodile tears and promises to fix and change and reform come spewing out.

Simple question for the cardinals: Just exactly what do you do every day? If this is all going on and you don't know a blessed thing about it, and aren't already trying to clean it up?

This is the second enormous go around — the first being 16 years ago when it was about teenage boys being raped by priests. Now, a generation later, not to mention $4 billion later and an approaching near extinction of the Church in America, what can you possibly say to America's Catholics?

Back then, it was boys. Since then, it's been young adult men. Are we really going to have to go through this with a different demographic group every generation? Let's be very clear here: The action of numerous bishops, in concert with one another, have resulted in scandal, massive financial losses, bankruptcies, a loss of faith, and one other thing not talked about much — death.

Look at these pictures, these are real victims of these monster prelates and clergy, young men who killed themselves after being assaulted by homosexuals who should never have been ordained. These are the real toll of their evil — these young men, unable to deal with the horror and trauma of what was done to them by predator homosexual clerics.

Some of the bishops knew about it, some covered it up, some participated in the assault. Some, like Roger Mahoney, who should be in jail, helped their sodomite priests friends escape the country and avoid prosecution. Without a doubt, some bishops and cardinals have blood on their hands, and still, another day goes by, and not a word, nothing, to say — we, the "good" bishops are finally going to demand this end.

Where are the supposedly good bishops — in advance of the Baltimore meeting in November — making public statements that at the very least, the cardinals — every one of them — should resign.

Wuerl and O'Malley and Cupich and the whole lot will take control of the meetings like they always do and bully you into submission, into going along with a brand new shiny policy that will have come about as a result of a two or three-year study. Of course, they will have ultimate control of the study, or the finding, or the report of it, or the implementation of it or whatever, and nothing will change because the homosexual mafia will still control the whole show.

What exactly is it that makes a "good" bishop, anyway? His friendliness to the Latin Mass crowd? His "prudence" in cleaning up the chancery — sort of — over a dozen years after his arrival? Or could it be how he speaks an orthodox game but allows homosexual clergy to remain in place because it's "prudent" to do so?

Wouldn't a good bishop be completely outraged — meaning publicly — not at just the issue of who knew what and when, but more importantly how this all came about, the acceptance of homosexuality by so many of his brother bishops and cardinals? Wouldn't a good bishop be pounding the phones in advance of that Baltimore shindig and talking to the press out loud saying these evils need to come to an end — immediately? Wouldn't a good bishop risk — and probably lose — his ecclesiastical career for the sake of the sheep, to protect them and openly call out the evil for what it is?

Wouldn't he care about his own seminarians, if he has any? Wouldn't he care about seeing this moment to finally change the status quo in the Church that has seen billions paid out and young men kill themselves? Wouldn't a good bishop see this as perhaps a moment of grace from Heaven to bring about a much-needed overhaul? Would he even consider the possibility? And lastly, wouldn't a good bishop ask himself if this crisis can't be a moment to effect the necessary change for the good of the Church, then, pray tell, what exactly would that future moment look like?

It's now or never, one of those rare moments that comes along very infrequently — even in a lifetime — where a new course can be set. The good bishops need to understand this and work up the fortitude to confront this evil within their own ranks and demand that the senior leadership resign. If the leadership refuses — obstinate in their evil web of lies and treachery and sexual assault and so forth — then the good bishops should close ranks themselves and resign from the bishops' conference — and they should make a very public statement why.

If all that happens in Baltimore this November is more bureaucratic garbage — with all the appropriate expressions of grief and so forth, of course — if real change isn't affected, which means changing the leaders, then the most historic opportunity for the Church in America will have passed by and the Church here will dry up as it speeds to its extinction because the homosexual predator crowd will have won.

The gay parishes, the gay provocateurs, the gay cardinals, the gay clergy will take complete control, even of the good bishops' dioceses, because there will be nothing left to stop them. The day will have been already lost.

These good bishops had better quickly come to their senses and do everything in their power to bring about change or, somewhere down the road, they will have blood on their hands as well. 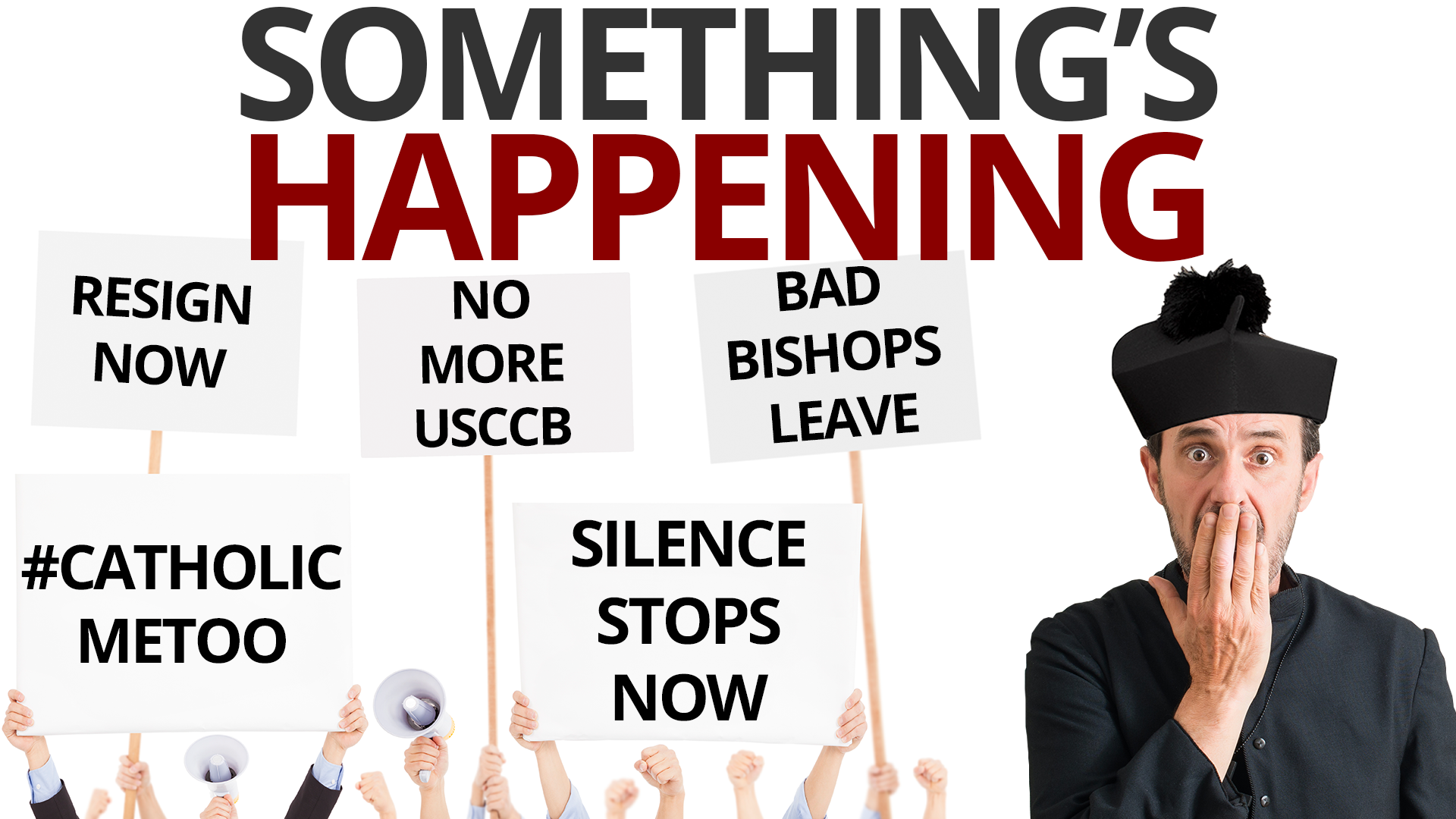 Something’s Happening
And it's GOOD.