It's a den of thieves.

Based on what we have come to learn about the United States Conference of Catholic Bishops (USCCB) over our time in Baltimore, the Conference needs to be brought to an end.

It is nothing more than a vehicle for obscuring the Faith, on the one hand, and advancing phony social justice warrior claims on the other. It is, in short, a den of thieves — stealing souls and money.

The Conference operates on a roughly $200 million annual budget, and while it's true that a substantial portion of that budget is funded by all Americans' tax dollars, the rest of it is funded specifically by Catholics' donations into the weekly collection basket. The bishops agree to have each diocese chip in some percentage of its own budget and forward that on to USCCB headquarters in D.C. to pay for:

In sum, you are paying for this Conference through a system of ecclesiastical and civil taxes. And for what? Absolutely nothing. Well, check that; if only nothing was being accomplished, that would be bad enough, but something far worse than just nothing is being accomplished here. The demolition of the Faith is going on.

But this is nothing new. When you consider that the Conference (and its attendant evils over the years) was begun by Detroit's own über-liberal Cdl. John Dearden back in 1966 — immediately following Vatican II — none of this can surprise anyone.

It likely is a surprise what goes on within those decidedly not sacred walls.

But then again, virtually no U.S. Catholics know anything about the history of their own Conference. So yeah, it likely is a surprise what goes on within those decidedly not sacred walls.

Lest the phony charge emerge from within certain quarters of the U.S. hierarchy that Church Militant doesn't know what we're talking about, when Dearden died in 1988, it was the NY Times which trumpeted the headline that he was the "leading liberal voice in the Church." See, Church Militant doesn't create division, we merely report on what's already there, your excellencies.

It was Dearden who gave the U.S. Church the wicked Cdl. Joseph Bernardin, elevating him to the number No. 2 position at the Conference after he was recommended by the relatively obscure (but longtime associate of Dearden) Atlanta archbishop Paul Hallinan.

Quick aside — Church Militant is always hammering that you need to understand the relationships and know the history in order to grasp the depth of the corruption. The roll call of past presidents, vice presidents or general secretaries reads like the scribble on the bathroom wall in a gay bathhouse. And remember the latest case of general secretary Msgr. Jeffrey Burrill — caught red-handed on the gay-hookup phone app, Grindr.

My, how the beat does go on at USCCB headquarters — all funded by you.

Being on the ground in Baltimore last week afforded one the opportunity to hear things — stray comments made in elevators among bishops (not to mention Conference staffers) chatting a little too loudly at nearby tables and even hanging around the bar (which is immediately next to the lobby) with open-air access.

My, how voices do travel in such open spaces — various members of the Conference, clergy and laity openly mocking Church teachings or liturgies or devotions or you name it. As a Catholic, it would have been more spiritually edifying, in some cases, to have been at the Southern Baptist convention than the U.S. bishops' conference.

One aspect of the Conference (among many) the average pew-sitter knows nothing about is the so-called news arm — Catholic News Service (CNS).

For a hearty laugh, just go to the CNS homepage and check out CNS' self-portrayal: "CNS provides the most comprehensive coverage of the Church today."

Ha — that's the same type of self-description that the Soviet Pravda made. Speaking as both a practicing Catholic and longtime newsman, the Catholic News Service is not Catholic, hardly constitutes news and certainly isn't of any service.

In every other organization on the face of the earth, having your "media office" inside corporate headquarters is called the propaganda department. Heck, even Joseph Goebbels and the Nazis were upfront about that.

During the course of last week, the highly dishonest, bishop-funded CNS took aim at Church Militant in an "article" written by one of the many social justice warriors your collection basket money goes to pay.

Rhina Guidos published her thinly veiled attack under the headline: "Sex abuse survivors urge bishops to denounce Church Militant's agenda." Yeah, whatever. While Guidos' sputum was published on the heretical site National Catholic Reporter, it was written as part of her work for the bishops.

Sorry, Rhina — you should check with your bosses before attacking us for using their own numbers on the homosexual predation so prevalent in the clergy.

Poor Rhina then goes on to try and ignore that pink elephant in the sacristy, quoting sex abuse groups saying Church Militant is trying to link homosexuality to pedophilia. Actually, Church Militant doesn't have to really even lift a finger to do that. The homosexual culture has done a fine job making that link all by itself.

The unstated mission, as it were, is to always deflect from sodomy while also promoting social justice.

And for the record "reporter" Rhina, it isn't pedophilia, it's ephebophilia. That's when homosexual men prey on physically mature teenage boys — which you somehow neglected to say is four out of every five victims of clergy sex abuse.

In the old days, they called it pederasty.

The Episcopal Propaganda Department (er, excuse me, I mean CNS) does seem to be somewhat lacking in its reporting skills — as it uses your money to provide the "most comprehensive coverage of the Church today."

Everywhere and anywhere you travel around the Conference, it seems the goal is to make sure that never a word is mentioned about the whole gay thing. The unstated mission, as it were, is to always deflect from sodomy while also promoting social justice.

The evil that exudes from this Conference has prompted Church Militant to add to our daily chapel prayers: "for the purification or eradication of the U.S. bishops' conference."

Please join us in that prayer.

The theme goes back to the theologically sound notion that when you are confronted with an unrepentant committer of foul deeds, whose spiritual destruction just keeps enlarging and claiming even more victims, then it is entirely appropriate to offer the prayer, "Lord, open his eyes or close them forever."

The evil with this group — as a group — seems to have no end. So, Lord, we pray for the purification or eradication of the U.S. bishops' conference.

If you join us during the week for either morning prayer or evening prayer, you will begin to hear that moving forward as our closing prayer. 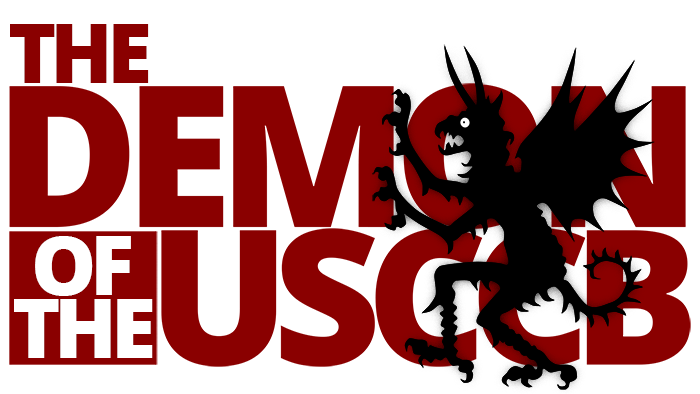 The Demon of the USCCB
The conference is controlled.