May 1, 2020  0
Podcast Available for Premium Subscribers

United States Senate Majority Leader Mitch McConnell unleashed a firestorm last week when he said blue states should not be looking for a bailout from the feds and using the Wuhan virus as an excuse to cover for their previous bad financial management.

After intense criticism from various governors, McConnell calmly went back to his office and doubled down, issuing a press statement entitled "Blue State Bailout," saying in part: "I think this whole business of additional assistance for state and local governments needs to be thoroughly evaluated."

He added: "There's not going to be any desire on the Republican side to bail out state pensions by borrowing money from future generations." He said he'd rather they go bankrupt, with the suggestion that they made their beds and should now lie in them.

While research indicates that, since the 2008 housing bubble, states have bumped up their rainy day funds, their lack of foresight and financial responsibility greatly exacerbated the problem. And now they are happy to saddle trillions more of debt onto the back of future generations.

Former South Carolina governor and U.S. ambassador to the United Nations Nikki Haley tweeted a defense of McConnell, saying in part: "I disagree that states should take fed money or be bailed out. This will lead to taxpayers paying for mismanagement of poorly run states."

Even as they put on face masks, their identities are even more clear than ever.

And unsurprisingly, states with the biggest financial woes are blue states, where every liberal flavor-of-the-month, social engineering, pet project coming down the pike has been funded.

President Trump jumped in the next day and said, since many of the states with sanctuary cities harboring illegal aliens are in blue states, then they shouldn't get a dime because it's a backdoor way of spending U.S. taxpayer dollars on non-citizens, here illegally.

Loads of mismanagement and using state revenues to fund their Marxist agendas has finally caught up to many of the folks, and now they want their state capital version of their "Obama phone." The Marxists have no problem heading to the feeding trough of capitalism when it comes to funding their failures.

Likewise, various giant businesses as well as premier universities elbowed their way to the front of the line and sucked up billions of dollars before the well ran dry, leaving loads of mom-and-pop, actual small businesses scrambling, unsure what to do next.

One of the more notorious cases was Harvard University, with a $40 billion endowment, which took almost $9 million in stimulus package money. But President Trump called them out by name and shamed the Ivy League bully, calling them practically everything but greedy, the public shame of which forced the school to reverse course and say it would give back the money.

Not wanting to land in Trump's crosshairs, Stanford University — with a $24 billion dollar endowment — said it would hand back the $7.5 million it took and Princeton likewise caved and said it would not accept the $2.5 million it had been awarded.

However, on a Catholic focus, Notre Dame bucked the shame game and announced it would, in fact, keep the $6 million it was awarded. Notre Dame has an endowment of over $11 billion. So much for all that social justice-venom they spew non-stop. We have $11 billion sitting in the bank, which, like loads of poorer people are having to do, we can raid our savings a little so those less fortunate can get by. But no, screw them. We'll take the cash. Too bad for them.

It's revolting that the Marxists and socialist set that has dominated higher education for decades, passing themselves off as morally superior because of their love and concern for the poor — and churning out brain dead students saddled with enormous debt and worthless degrees — then betray their own hypocrisy.

As we've been saying at Church Militant for weeks now, one thing that the Wuhan virus is doing is forcing all the masks to be dropped. We are seeing everyone and everybody for exactly who they are. Even as they put on face masks, their identities are even more clear than ever.

Likewise, in other parts of the Catholic world — where poor financial management has occurred, owing to a stampede out the doors of the Church, owing to their politically correct preachings — a money meltdown is happening there as well. Already barely making ends meet, again ultimately because fewer and fewer people want to listen to the meaningless PC blather flowing from the bishops, they too were forced to head to the trough.

The bishops also smelled free money and ... went for it to shore up their already financially collapsing chanceries.

Here's how it broke down in part, according to statistics from the Diocesan Fiscal Management Conference: A total of 104 chanceries and 200 other diocesan organizations in 160 dioceses applied for the stimulus package money. Nearly every chancery in the country has abandoned its mission of being Catholic, at least in some significant way, and the shrinking numbers in the pews are causing the bottom line to shrink as well. So like the liberal blue-state governors, who McConnell said should go bankrupt and stop using the Wuhan virus as a cover for their failures, the bishops also smelled free money and, in a masterful stroke of kicking the can down the road, they went for it to shore up their already financially collapsing chanceries.

Back in 2008, the cry was, GM is "too big to fail." Apparently, Harvard, Notre Dame and over 100 bishops think the same way of themselves.

The chancery bureaucracies are already a case study in bloat and mismanagement — overlapping duties, nepotism, offices and departments created to keep the machinery of a liberal Church chugging along. Then there's the actively homoclericalist clergy, their cover-up allies — all of it. Religious education departments that often teach anything except the Faith — the list of failures is too long to catalog.

Heck, the dioceses of Buffalo, Rochester and Sante Fe, which all three are actually bankrupt — they applied for stimulus money. They got turned down because they were already bankrupt. They're taking the government to court. Hmm ... They're bankrupt, need stimulus money, but they can still afford lawyers to file suits.

In some ways, though, for a chunk of the nation's bishops, the Wuhan virus came just in the nick of time. It may have saved them from a certain monetary death. For the time being, living off federal largesse, they'll be able to keep their faithless, pro-gay departments funded to keep undermining the Faith.

It's too bad that on the application for the stimulus money, bishops didn't have to prove how closely they hew to the mission of their "businesses," entrusted to them by the Son of God, or else Trump could have shamed them, as well, into handing it back.

Yep, Wuhan is proving to be the great revealer of all things. Emergencies have a way of showing you what folks are made of, and who you don't want in your foxhole. 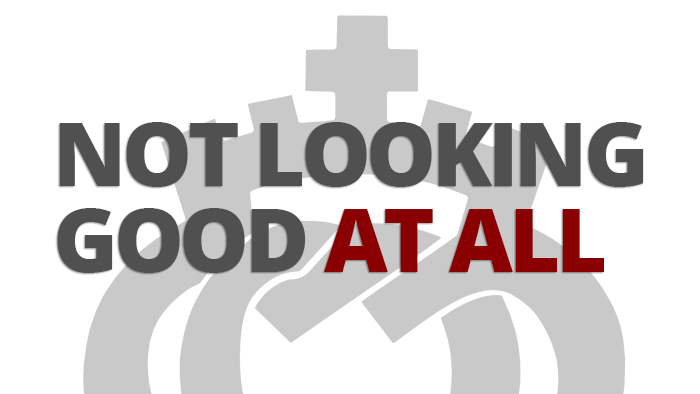 Not Looking Good At All
Not at all.