Boots on the Ground

And they are 'angry' boots.

Right out of the gate, let's turn to St. Thomas Aquinas: "He who is not angry when there is just cause for anger is immoral. Why? Because anger looks to the good of justice. And if you can live amid injustice without anger, you are immoral as well as unjust."

Did you catch that? There is more than one thing in that quote, but Thomas makes his flat-out statement, and then supports it quite ably, as he does with everything.

The Left drives around with bumper stickers on their cars about "if you're not outraged ... ." The Marxists don't get to claim the high moral ground of high dungeon at perceived injustice. The Left imposes injustice. It's almost the working definition of the Left, in fact.

And yet, so many wimpy Catholics are always so offended and put off by "tone" and "anger." Well, when anger is called for, and you don't get angry, you are immoral. Just ask St. Thomas. And notice, he does not say "the act" of not becoming angry is immoral, but the person himself is immoral — lacking morality, without morals. And if you've got a problem with that, take it up with the angelic Doctor, not Church Militant.

Anger responds to, is a correct reaction to, the lack of the cardinal virtue of justice. Justice is giving a person what is due to him. Priests raping children, destroying families and hiding behind their collars, whether they are in the SSPX or not, is a crime and a denial of justice to victims.

Victims — especially defenseless children, but all victims — are due, they are owed — safety, especially when placing their trust in these men. Catch that: They are due in justice to be safe and protected, period.

Then for those who either 1. don't want to face the music of the horror (understandable), 2. ascribe ulterior motives to the messenger (pathetic, because it deflects from the evil at hand), or 3. talk about "tone" (because they have swallowed whole the culture of effeminacy) is to offend against justice a second time.

Those approaches muffle the voice of survivors of sex abuse. It denies justice by helping to continue a climate of cover-up, and this is true whether a person is in the SSPX or what they term the Novus Ordo Church. Destroying a life is destroying a life, regardless if you face east in the Mass or the people.

It was the horror of the 2018 Summer of Shame which brought this evil into focus, the specific evil not being the abuse itself — as much as it is diabolical — but the specific evil of the accompanying cover-up.

Paul and Kris Ciaccia from Pennsylvania had had enough. They felt lied to (they were), betrayed (again, they were), and down deep, knew that justice was being offended, so their reaction was to get angry. They took that anger and began their controversial podcast, The Angry Catholic.

They are part of a growing number of outraged (read, angry) Catholics who simply refuse to sit back and tolerate this filth anymore.

All around the country, Catholics like the Gordon brothers and Patrick Coffin, for example, are calling to accountability everyone in the hierarchy, as well as those not in full communion.

This evil needs to go. Those responsible for it need to stop being protected by their superiors and apologized for by their devotees. Evil is evil, period. And to not respond with anger means there is something wrong with that person, not the angry one.

Consider the term "justified anger." "Justified" in this use means specifically because justice is being denied. And the anger arises from that point, to restore justice.

This growing grassroots response, and increasing discussion about the depths to which the Church has sunk, is the subject of this week's Church Militant Mic'd Up—The Angry Catholic.

If you aren't angry about all this, then you are immoral, because you lack charity for victims and love for the truth. 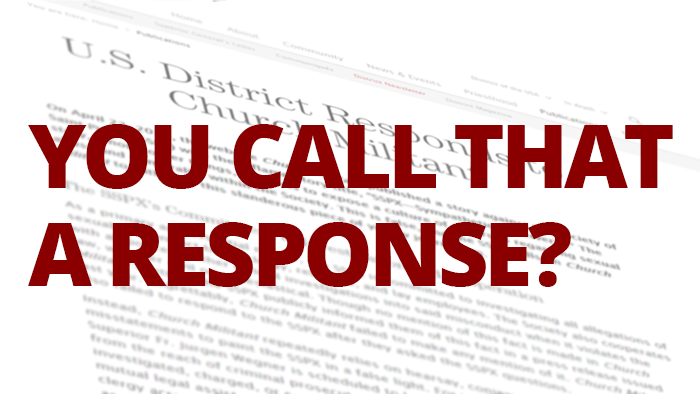 You Call That a Response?
Lies and deflections.