Even Heaven has borders and so does Hell.

No matter how hysterically framed the claims of the Marxist media are, those claims are usually lies, or at the very best, the truth out of context.

For the past three years, the "get Trump mob" has been non-stop with the "Trump is a racist and xenophobe" spin, all because he wants to protect our borders. When he preemptively closed the border to China shortly after the Wuhan virus began to spread, they called him a racist. When he said we need to stop the illegal immigration over the southern border, even though they themselves had said the very same thing four years earlier, they called him a racist.

Well, look who's laughing now. A large number of countries around the world have now closed their borders. Hmmm, it's funny how that works.

But once this China virus-episode has passed, the Marxists in the media and the democratic leadership will be right back at it about open borders and letting everyone in. Heck, they aren't even waiting. Fake Catholic Biden and nutty Bernie Sanders were saying earlier this week they wouldn't close the borders because of the Chinese virus.

And for the record, calling it the Chinese virus is no more "racist" than calling German measles or the Spanish flu, but the Left has zero intellect. They move on nothing but rage-filled emotion to protect abortion, period.

The immigration game is a multi-billion-dollar business — a cash cow for the Left — and that includes the U.S. hierarchy.

But the question of immigration is going to remain a huge issue moving forward in the campaign and the national debate. The U.S. bishops have a stake in all this. The immigration game is a multi-billion-dollar business — a cash cow for the Left — and that includes the U.S. hierarchy.

A couple of weeks back, when Michelle Malkin visited Church Militant, we interviewed her to get her view on this pressing topic and talk with her about her most recent book, Open Borders Inc., where she lays out the case against the Left.

Michelle is part of a larger program we've produced here in Detroit. It is, in fact, the debut episode of the all-new Mic'd Up — one of our most popular Premium programs — back from its hiatus as we were revamping and expanding the studios. Here is a preview of the show:

Mic'd Up will premiere this Sunday at 10 a.m. ET right here on Church Militant. While it is normally a Premium program, this episode will be available for free to get you back in the swing of the show. Each Sunday, a new episode will be available, each one as high-quality and in-depth as this premiere episode is. It's a show designed to make you think, to inform you and equip you in your dealings with friends and family, to help them learn, from you, and understand the current state of affairs.

It's just a sad reality that various members of the hierarchy are bound-up with the Marxist Left. That's been the case for decades, but now it's all coming out. The Marxists want the involvement of churchmen to give them cover — to give them and their wicked agenda an air of respectability and credibility. That agenda is destroying Western civilization. In fact, that's the point of the agenda. And you need to understand, every single bit of this is related. It's all connected.

Part of that is owing to the wicked men pulling the strings, but more importantly, just how crafty the Diabolical is. There isn't one area of human life or history or culture that he isn't there operating in the shadows — or as St. Peter puts it, prowling about like a roaring lion looking for someone to devour.

The Left's weaponizing of the immigration issue is just one area of this great spiritual battlefield, and we need to understand everything we can.

So please look for the debut of the all-new Mic'd Up starting this Sunday at 10 a.m. ET and, in case you forget, we'll be sending those on our e-mail list a reminder with the link. 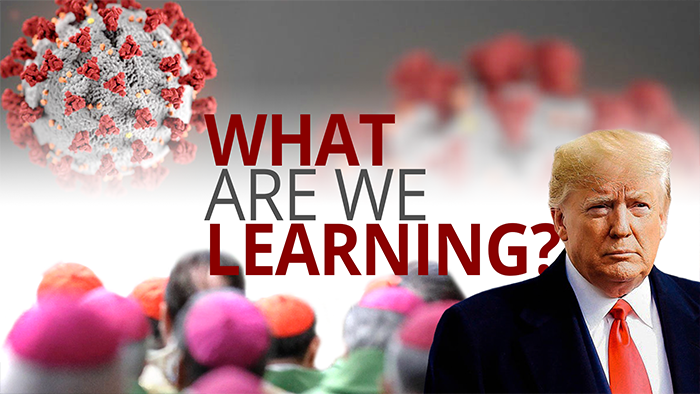 What Are We Learning?
Actually, a lot.