The perfect Christmas gift for the Christ Child is a sword.

Merry Christmas — for not only Christmas Day but the entire Octave of Christmas, whose joy cannot be contained to just one day, but spills over into another calendar week.

Christmas is always a time to keep things in proper focus. To put them in perspective, that little Babe in the manger — if we are honest — is a born killer, and to follow him means violence. He Himself grows up and says, "The Kingdom of Heaven comes as through violence" — spiritual violence, He means, the ripping apart of ourselves and putting whatever evil there is in us to the sword.

The same Babe would also say in his adulthood, "I have not come to bring peace, but the sword." Following the Babe means violence, division and hatred — and death. There is no escaping this.  When light comes into a room, the darkness is abused and driven out by the violence of brilliance. Darkness is made not only homeless, but vanquished, killed.

Christ in the manger is only 40 days old when Simeon prophecies that He will be responsible for the fall, the defeat of many in Israel. And wherever the Christ Child is, violence is right there, following like a shadow.

Within days after His birth, He is brought into the Temple and the old man Simeon unsheathes the sword for the Queen of Heaven. Because of Him, Mother, a sword your own soul shall pierce. Days later, the state pulls out its swords on the orders of Herod Antipas and brings forth the first martyrs of Christ — the Holy Innocents.

Violence, hatred, swords, killing — they are all over the pages of the gospels. The Prince of Peace brings His peace through violence and hatred — hatred of sin, evil and the Prince of Darkness. Even on the last pages of Sacred Scripture, as He comes to usher in the final defeat of the enemy, He comes with a sword — a sword to kill injustice and evil.

But these images never sit well with the Church of Nice crowd; it's too offensive, too unsettling, not nice enough. It will frighten the children.

"I came into this world to bear witness to the truth," He will grow up and tell Pilate. "Everyone who hears the truth, hears my voice" — and those who don't hear His voice crucify Him.

The reason so many Church of Nice members — the "country club" Catholics, the emasculated clergy — will fawn and ooze and gush over the cribs and mangers near the front of the churches this time of year is because that's about their speed. They want a weak God, a cooing, slurpy, baby of a God, lying there looking cute and cuddly, demanding absolutely nothing other than making goo-goo faces.

But they are self-deluded. This newborn King demands your blood, your sacrifice, your sword be laid at the foot of that manger. He demands you make war and bring death to the enemy. You cannot love Him without hating the world and evil and sin. You cannot approach the sacred crèche without your sword drawn and ready to be placed in His service.

This is no mere baby. He is God with us, beginning His mission to announce the conquest, trampling under and destruction of Hell, and anyone who loves Him must take up the sword and join in the battle until the day they die.

To love God means to hate sin. The peace that the Child ushers in is not a détente, an accord, where good and bad strike some tentative pact of mutual non-aggression. His peace means total war: "I will put hatred between you and the woman, between your offspring and hers. You will strike at her heel, and she will crush your head."

The angels did not sing to the shepherds because a baby was born. They sang because His birth announced the final battle to completely crush underfoot their old companions whom they had cast out of the angelic realms. As the angelic trumpets blared and their voices filled the Heavens with cries of "Gloria!" Satan and all his offspring were put on notice; the final battle was beginning and you and your followers will be cast into the pool of everlasting fire — and there will be peace. Only then will men beat their swords into plowshares.

From all of us here at Church Militant, a very merry, happy and holy Christmas to all of you and your families, friends and loved ones.

The Vortex will return On New Year's Day — the Solemnity of Mary, Mother of God, the co-redemptrix. 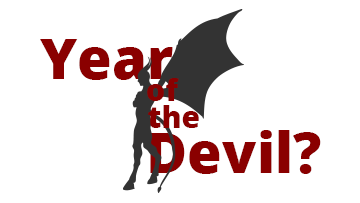 Year of the Devil?
2020 will be unlike any previous year.