Boys Will Be Boys

According to natural law.

Laying aside the baggage label assigned by the Left, let's think for a moment about the underlying thought here because it approaches the status of natural law. Boys will be boys boils down to the natural law principle that a thing is what it is. Hear that, lefty, commie, Marxist, socialist pinkos?

A boy is not a girl. A girl is not a boy. But what is a "boy"? Well for our purposes, let's confine ourselves to some traits inherent to masculinity — things that totally trigger the Left and send them into fits of violent rage.

One trait of authentic masculinity is the desire to belong to a cause greater than ourselves. Now, granted, in the current culture, this has been attacked and marginalized, but it can't be gotten rid of because, like natural law, it's just "there."

This is the underlying reason gangs exist, and "boys" go and fight wars, and fight for their schools on the field or sports arenas. This "boyness" engenders a competitive spirit, a need to conquer, and it also brings about a camaraderie, an esprit de corps.

It's resulted in this throughout all of human history. The positive traits of masculinity presuppose that something is greater than us and that duty requires a sacrifice, a call of duty if you will, that at its heart is a defense of the innocent.

As long as there are healthy outlets for such a yearning, society hums along very nicely, thank you.

For nearly 2,000 years, the Catholic Church provided a natural outlet for this natural law reality for young men. There were spiritual mentors who demanded excellence and sacrifice from young men, and it was all properly ordered to the greatest cause of all: eternal salvation.

The real reason the Church has fallen into such disrepair is because too many leaders have ignored the natural law in multiple realms. The truth is obscured. The courage to announce the truth has evaporated. And in the place of truth, we see cowards compromising at every turn.

The Church had become infested with emasculated men who no strong youth would even dream of following. Men will sacrifice for a cause — yes. But they will only follow another man in that endeavor.

No self-respecting man would pay one dime's worth of attention to a wimp. Why are there such a shortage of vocations to the priesthood and religious life? Look at who is in charge.

Think of the founders of some of these orders, the great saints, or the fathers or doctors of the Church.

You'd be hard-pressed to find a wimp among the entire panoply of them because there weren't any.

So where are the St. Bernards or the St. Bonifaces or the St. Gregorys of the day. Well, in short, the system has been gamed by emasculated men to prevent those kinds of males from coming forward.

So what becomes of young men who otherwise might have been formed into such formidable Catholics? Well, they don't simply lose their masculine natures? They just find other "causes" to which they dedicate themselves — you might call them facsimile masculinity.

Cases in point, in America, studies reveal that large numbers of young Hispanic men are joining up in the ranks of Islam.

Islam presents a picture of masculinity — distorted and twisted as it is — that speaks to ignorant young men who are susceptible to such a perversion of masculinity, even to the point of becoming suicide/homicide bombers.

For all its faults, you have to admit it is capable of producing that notion — sick as it is — in the minds and hearts of these young guys a willingness to die for a cause — illicit as it is.

Likewise, in Europe, a neo-paganism is reviving and young males are the main proponents.

In Iceland, the first temple to be built in a thousand years to a Nordic god was opened last year. A second one is near the construction phase this year.

The temple has as its main adherents young men drawn to it by its hard-driven vision masculinity. Now that vision, that pagan vision of man, is completely incorrect, but it is filling a vacuum left by weak Christian religious leaders, especially Catholic leaders.

The Catholic Church, with its virulent Christ-centered masculinity, defeated that paganism and raised up Western civilization on the bones of those false gods. And now the Church is in all-out retreat.

In England, Celtic paganism is roaring back and in Ireland, where Celtic paganism received its most lethal blow under the rock-steady hand of a tremendously masculine man, St. Patrick, the snakes are returning to the Emerald Isle.

Nordic gods, Celtic gods, they are coming back in fashion, and as long as weak effeminate men continue to populate the halls of power and influence in the Church, these dark gods of man's basest nature will roam the earth again. Those gods and their human warriors were cruel and merciless. In their dark world, the weak suffered, mercy was a rumor and justice didn't exist.

It was the butchery of the innocent for the sake of elite — what we witness so much of today in the struggle of state over the populace, abortion, sex-ed indoctrination in the schools and every other bowing and sacrifice made at the altar of the pagan gods.

Yes, boys will be boys. And unenlightened men are beasts. The truth of masculinity must be recaptured and once more march into the pagan world of darkness and subdue it and re-present it to Christ.

What is natural to men is that they emulate the model of manhood, from where they derived their nature. Any other man, unassisted by grace, is a perversion of nature, and the rest of creation will pay the price for it. 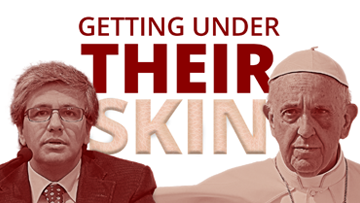 Getting Under Their Skin
And be happy about it.