Bring Back the Inquisition

But who would run it?

800 years ago, in 1232, Pope Gregory IX established an ecclesiastical tribunal whose chief aim was the rooting out of heresy. Bring back the Inquisition but with one caveat: Most, virtually all, of the current hierarchy is not allowed to serve on it. Indeed, certain hierarchs would be the objects of the tribunal, not the inquisitors.

The point of the inquisitions (plural, because there were different ones, and the Protestants had their own after the revolt in the 16th century) was to not just bring a heretic back from his ways, but failing that, to prevent him spreading his errors to others. Seen in that light, the Inquisition was largely about justice. Innocent souls have a right to the truth and a right to be protected from falsehoods.

That was the driving force behind the Church's Inquisitions. That is why we need them back again, removed from any taint of the hierarchy, because it is precisely from certain hierarchs that the innocent need to be protected. Viewed again from the perspective of justice, we can't think of anything other than an Inquisition to mete it out properly. The complicit, cowardly bishops, as well as the crooked and corrupt ones, will not confront those who bring a scourge to the people of God.

Innocent souls have a right to the truth and a right to be protected from falsehoods.

What they permit, what they advance, what they will not confront destroys faith in the minds and hearts of those with weaker faith. It is insufficient for those who have stronger faith (or naive faith) to sit back idly and throw around high-sounding platitudes like, "The Church has been here before; we'll get through this as well." That is only true corporately speaking. It is an abomination to say that in disregard for the individual souls damaged and wrecked by all this scandal.

And please, do not say to such as these, "Don't leave Jesus for Judas." That is true, of course; but you should thank God on your hands and knees that you have been given the gift of faith to such a degree to understand that. Others have not. They need you to take up arms and defend them, not go all "academic" on them. And precisely to the point, if you really believe that, then why aren't you doing your part to confront Judas, to defend them in the open?

Many in the Church these days are little else than selfish enablers, barely registering above the low bar of "professional Catholic," as Pope Benedict declared. You have your faith, you say, and nothing shall disturb it. You have your faith, but where are your actions in defending the innocent?

You can promote your own private little endeavors in the friendly confines of your local Catholic bubble, but where the rubber hits the road, where a soul's mettle is tested, where you are tried by fire and forged in divine justice is your willingness to lose everything you have, everything you have built to announce the fullness of the truth in defense of those who have a weaker faith. But for most Catholics today who count themselves as faithful, that is a bridge too far.

It's impolite; it's rude; it's "unnecessary." Leave us, they say, in our comfortable Catholic existence, a world we have crafted with a modicum of sacrifice, but, of course, always on our terms. To criticize a bishop openly in harsh-but-truthful terms, that's too crass. Tut-tut. Speak in charity, they say, failing to see that defending those of weak faith and in pained distress over the scandals of the Church is charity — charity in action. It is the very definition of faith and good works.

Many in the Church these days are little else than selfish enablers.

Are we to think for a moment that God Himself does not want the evil confronted, called out, exposed for the sake of the souls being lost because of it? Have you not heard what the Holy Spirit Himself inspired the Apostle to command the Ephesians: "Try to learn what is pleasing to the Lord. Take no part in the fruitless works of darkness, rather, expose them"? How does the Devil seduce a believer, one with faith? He does not tempt him so much in the ways he tempts the worldly, through the flesh. It is, rather, through the mind; through pride. He doesn't wipe away his faith or even so much diminish it, per se. Rather, he distorts it, making it fruitless.

With the hierarchy, many of whom do not accept the Faith, don't believe in the Deposit of Faith; he leads them to Hell by assuaging their consciences through substituting worship of the second commandment over the first. But for those who do believe, how best to destroy them in the fires of Gehenna? By having them bow down in all self-righteousness, bow down to the first commandment in neglect of the second. I have faith; those others should respond likewise. Thus, they condemn themselves out of their own mouths.

And when John the Baptist came to them preaching repentance and love of their neighbor, the well-heeled and self-righteous took offense. Both commandments were too much. No one attains eternal life by looking the other way in the face of evil to the neglect of souls. Those who do, Catholics who, in the secret of their hearts, count themselves as superior because they perform various works, need to go and learn the meaning of the words "How can you say you love God Whom you don't see, when you do not love your neighbor whom you do see?"

You cannot avoid the almost always uncomfortable conflict with evil and ever hope to see God's face. You must be a lover of truth, not a self-deceived lover of self. 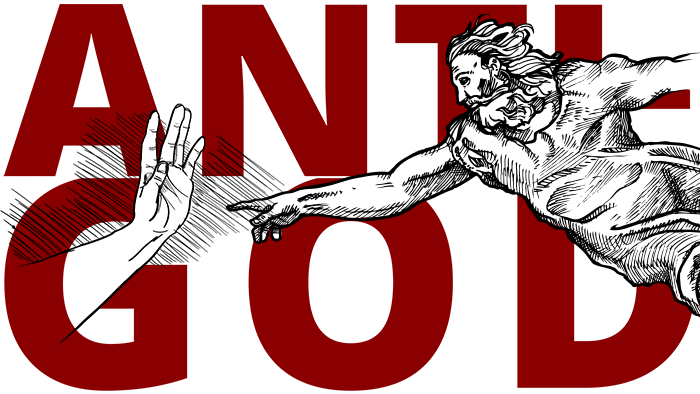