U.S. Cardinal Raymond Burke is blasting the idea that Holy Communion should be available to anyone, especially the likes of Catholic turncoats like Democrat Joe Biden, who supports and cheers so-called "abortion rights."

The idea that Holy Communion should never be denied is one of many pushed by homo-heretic Jesuit James Martin, who enjoys quoting Francis saying, "Communion is not for the perfect."

That's correct — it is not for the perfect — but it is for those in a state of grace, not child killers.

Burke went straight to the issue in a recent interview he conducts on a weekly basis with Catholic Action for Faith and Family.

Burke will no doubt begin to be criticized for injecting himself into American politics, but it's clear given the current climate, His Eminence has moved far beyond those types of concerns.

In one sense, he's still far behind and only slowly catching up to the likes of Cupich, McElroy and even the Pope himself — none of whom can seem to stop going on about politics.

For example, at last month's semi-annual meeting of the Useless Conference of Catholic Bishops in Baltimore, San Diego homosexualist Bp. Robert McElroy stood up and downplayed abortion as a political issue.

Burke had some counsel on that issue as well, gently ripping into the idea that abortion is somehow on the same footing as any other moral issue, in essence, denying a hierarchy of morality.

When asked directly if abortion is the pre-eminent issue, he didn't mince words. In fact, McElroy — in keeping with his habit of presenting distortions of Church teaching — has publicly stated that being chaste is not really that important, saying it's not the only virtue on the list.

The current state of affairs in the Church is having the effect of eroding people's faith and certainly discouraging many people.

They wonder on social media and privately how much longer all this can go on. Friends and family see and hear all this and are being turned off.

From the homosexual clergy dominance, what Abp. Viganò has appropriately termed the "corrupt gay mafia" running the Church, to the continued scandals in multiple dioceses, bishops being investigated — at last, for their unethical and immoral behavior — all of it is having the effect of death by a thousand knives, and people are wondering, "How long, oh Lord, how long?"

As we stand on the brink of 2020 — and all the stars are aligning for a tumultuous year — it may offer some comfort and perspective for those interested to tune in each week to the regular interview session conducted by Thomas McKenna and Cdl. Burke.

And if you'd like to view the entire interview we have taken these clips from, it's available by clicking on the provided link.

It's hard to imagine a more fretful time for world history than this coming year, as two massive worldviews collide, two mega-views which can best be summed up as the forces of God and anti-God.

Atheistic marxism is storming back to the world stage, disguised as socialism or climate change, and the Church has perhaps never been more compromised to fight this evil than She is at this moment.

We need leaders who both understand the core issue and have the guts and stamina to call it out. 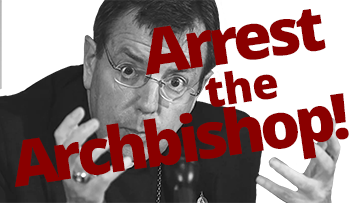 Arrest the Archbishop!
The walls are closing in.