‘But What About Them?’

It will prove to be a very poor defense.

As the scandal of homosexual predation among the clergy continues to spread — and begin to engulf even a papacy — various Church leaders are beginning to present the "but what about them?" defense.

This tactic is becoming even more prevalent as state and federal investigations continue to widen and more and more secular media coverage begins bearing down on various bishops and cardinals.

First off, it's true that child sex abuse is not isolated to the Catholic clergy, that it remains a formidable challenge in all sorts of other institutions that also have regular contact with children; so schools, coaching, youth groups, child care agencies, etc.

And the incidence of abuse, as well as the ignoring of it by some in law enforcement is shocking and inexcusable, that children would not be seen as victims until only very recently — all of that is atrocious. But there is something ringing hollow in Church leaders pointing truthfully at other institutions and drawing attention to the problem there as well.

The Catholic Church has a divine mandate established by the Son of God to be the sole force on earth capable of defeating evil. So it is foundationally erroneous to offer a "but, what about them?" defense for all of this horror.

Church leaders cannot have it both ways, claiming theological and moral superiority — which is correct — over man-made institutions and societies and yet, when leaders abuse their power and destroy lives and souls, suddenly put themselves in the docket alongside other perpetrators insist on being judged by the same standards.

Catholic leaders fall much harder from grace than anyone else because they begin much higher. This is just common sense. What faithful Catholics want, including some pretty notable ones, is for a huge number of bishops to accept responsibility for all this — not just with their words, but also their actions — and resign.

To now present this as a "this happens everywhere" situation is disingenuous and turns up the temperature on everything even higher, because it looks like — again, perception — looks like they are once again trying to sidestep responsibility for all this.

And that makes too many bishops look either crooked or, at best, negligent, and if negligence be the case, then it's still time to step down.

The tone deafness has reached such unbelievable heights that it seems nothing the bishops say or do could possibly shock anyone anymore — but it does. For example, the public appearance anywhere of Cdl. Donald Wuerl — much less at the upcoming March for Life activities — is astounding.

How can that man have the gall to show up anywhere in public not in sackcloth and ashes?

And to show up at a March for Life event — of all things — when he has spent decades giving murderous abortion Catholic politicians a pass on sacrilegious Holy Communion? Seriously? Or Abp. Gomez in Los Angeles with a half-billion dollar fundraising campaign in the middle of the worst public relations disaster in the history of the Church in the United States?

In the next few days, Church Militant has learned, Abp. Allen Vigneron of Detroit is going to finally announce publicly what he has been sitting on for months waiting for the sex abuse storm to pass, a fundraising campaign of more than $200 million.

The lack of shame, the hubris, the total ignoring of the problem is really beyond words.

And in the case of Detroit, consider that, on the one hand, Vigneron wants another significant pile of cash from the sheep while the state attorney general has raided his chancery and carted out the secret files.

Various clergy in Detroit confirm for us that Vigneron and the chancery gang don't really have specific plans for the cash. They just want it now while there are still some old Catholics around before they die and leave it to their children who long ago gave up the Faith thanks to 40-plus years of heterodoxy and heresy preached freely in Detroit every Sunday from parish pulpits.

What multiple bishops are not thinking about is this: The "what about them?" defense may, may sound reasonable — although not really — because there is some truth to it. But it certainly will not sound reasonable when each one of them dies in his turn and stands before Our Blessed Lord.

Everyone they will want to point a finger to in their defense at their personal judgment, Our Lord will simply say, "And I did not give that teacher, that coach, that bureaucrat the grace of office I gave you. I handed over to you my power and authority and you abused it. You did not love and care for souls. You concentrated on your love of self and dressed it up as spiritual and religious. Depart from Me, for I tell you, I do not know you."

And this will be the final end of the "what about them?" defense, and it will lead to final damnation. 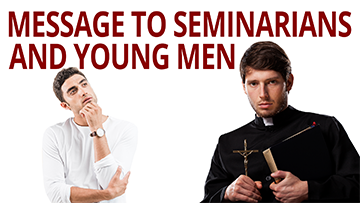 Message to Seminarians and Young Men
Go out and save the Church.