So look what we found. This is the party registration information for Scranton, Pennsylvania bishop Joseph Bambera. And there it is, right there: Democrat — also known as "child executioner."

Bambera is a big-time homosexualist — meaning one of the men in miters turning the Church pink as fast as he can. He wants homosexuality normalized, which is one reason he has fellow homosexualist James Martin constantly tromping through Scranton on speaking gigs.

But Scranton's gay-friendly Bambera was easy to find because records are so open and easily accessible in the Keystone State. Bambera is a disgrace of a bishop, sitting atop tens of millions of dollars in diocesan endowment yet always poor-mouthing.

He's also the bishop of whitewashed Msgr. Walter Rossi — on loan to the archdiocese of Washington, D.C. to run the Basilica of Immaculate Conception.

Bambera and Wilton Gregory put their collective heads together earlier this year and produced reports saying Rossi had done nothing wrong — this despite mountains of evidence that Rossi is gay, has had boyfriends (some of whom are fellow priests) and even shared a property with one of them.

But being actively gay (and even if you have a boyfriend) doesn't bother homosexualist bishops like Gregory and Bambera. But when it comes to being registered Democrats (you know, the party that hacks up babies in the womb and sucks their cut-up corpses through razorblade-tipped vacuum tubing those guys), not only is Bambera publicly registered as one, but it's a safe bet that many of his pals are as well.

Given the polarization in America these days, there's not a lot of cross-socializing going on between those with diametrically opposing worldviews. So the old "birds of a feather flock together" slogan is back and stronger than ever.

When Kamala Harris was selected by the people who control Biden as his running mate, the U.S. bishops' conference was doing backflips — so excited because Kamala would be helping people on the margins. Sure she will. Helping them on the trains to the internment camps for political opposition maybe.

So why would a staffer at the USCCB feel such freedom to tweet out her ecstasy at Harris' selection It's obvious — because the USCCB is all down with the Democrats. Her only sin would have been perhaps simply being a little too public about it.

Bambera and other U.S. bishops are registered, dyed-in-the-wool Democrats. They have been for decades. Even Providence, Rhode Island bishop Thomas Tobin admitted publicly in 2012 after Obama was reelected that he could not remain voting for Democrats.

Well, good. But seriously, in 2012? Talk about late to the game. But on the other hand, better late than never, we guess. Why are bishops like Bambera allowed to remain bishops (heck, even in the Church if they cling to their affiliation with the party of death)?

The Democrats today are straight-up child-slaughtering Marxists who are in love with sodomy and are doing everything they can to bring about the final conclusion to the sexual revolution — the destruction of America.

Bambera is a fraud of a Catholic. Sure, he's baptized. Sure, he's a bishop. So what? Doctors of the Church assure us there are loads of them in Hell. And how did those poor, miserable former bishops end up in Hell? By trading away their grace of office for worldly pleasure. That's how.

That trading away ultimately (sooner or later) results in a full-on loss of supernatural faith, and then, it's just a matter of time till Old Nick stokes up the furnace for them. No Catholic, much less a bishop, can vote for the party of death and not commit mortal sin.

So when he, a registered Democrat, brings in spiritual terrorists like James Martin, he's bringing them in to further confuse the faithful.

The party is wracked with intrinsic evil which it converts into laws, and any Catholic who pulls the lever for them must beware that he's also pulling the lever for the trap door under his own feet. It's a party of godless, atheist Marxists.

And when a bishop like Bambera appears in his cathedral, he should be booed out of it by faithful Catholics. A bishop like him is a traitor to the Church, souls and the country. Yet he gets to stand up there and use his office — or rather abuse his office — for the promotion of child slaughter.

It doesn't matter whether he personally promotes it; he helps the killers get into power. Without quislings like Bambera they would never attain high office. But frauds like him have spent many years polluting the minds of the faithful into thinking good is evil and evil is good.

So when he, a registered Democrat, brings in spiritual terrorists like James Martin, he's bringing them in to further confuse the faithful. It sure would be interesting if everyone who saw this Vortex called the bishop [at (570) 207-2238] and asked why he is a registered Democrat.

If the Democrats can stir up all kinds of trouble about mail-in voting, well faithful Catholics can certainly do some phone-in voting, right? So phone (570) 207-2238 and let him know how you feel about him being a registered Democrat.

And then, it'll be on to some more bishops around the nation. Hiding under your robes has gone on long enough. 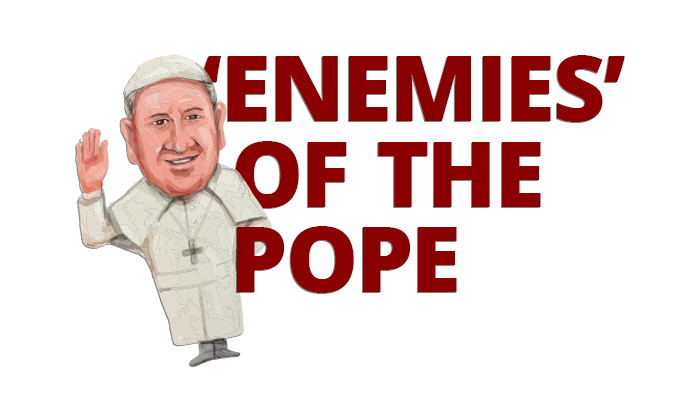 ‘Enemies’ of the Pope
Let the games begin.