Especially a man who is only 'sort of' good.

One of the things you encounter in this work of ours is people talking about the "good" bishops and the "bad" bishops. However, what is never really outlined is the difference. What makes one bishop good and another bad?

In other words, is this just a relative measure of one bishop against another, or is there some objective understanding, and if so, what does it consist of?

Allow us to explore this for a moment or two.

If the standard is measured against a given "bad" bishop that most faithful Catholics would seem to agree is an obvious traitor to his office, then most bishops would come out looking somewhat okay.

Take, for example, Archbishop Joseph Cardinal Bernardin, who any thinking Catholic — or just one with a pulse — would agree was a "bad" bishop. We won't go into the multiplicity of reasons why in this Vortex because we have in previous ones, but let's just use him as a standard.

So if he is the poster boy of bad bishoping, then any bishop who is even slightly less horrible than him is doing OK, right? Well maybe not, you say, and then the debate begins. When you go down the road of comparing one bishop to another to determine which one is good and which one is bad, there's not a lot of clarity there because the standards are all relative.

In fact, by this view, you could have an entire conference of truly bad bishops, but the least bad one actually looks good by comparison. After all, a serial adulterer bank robber doesn't look all that bad standing next to Al Capone or the head of the Medellin Drug Cartel, Pablo Escobar. No, measuring a bishop by how he stacks up against another bishop isn't a good way to determine this.

A bishop must be measured against an objective standard of what it means to be a good bishop. So what remains then is to determine what such a standard would consist of, what would be on the list, what criteria would a man have to fulfill to be objectively considered a good bishop.

And considering that various men would meet the standards (or not) in varying ways and times, what you would end up with is a scale where some men would be considered as exceptionally good bishops while others would be less so, and still others, not good at all and some even bad or wicked bishops.

It would be like a spectrum, a range, say from one to 10 — 10 being very good and one being bad/wicked. So again, what would be the topics that would have to be graded out? Holiness? Administrative skills? Dedication to formation of seminarians? Overseeing the quality of preaching of his priests? Speaking out against heresy or heterodoxy? Ensuring Mass in all of his parishes was being offered reverently? Spending a great deal of his energy actually instructing the faithful — especially in these days?

How about all of the above? And then even more?

What about bold clear exposition of the Faith? Public condemning of heretical notions? A campaign to rid any Catholic institutions in his charge of leaders who do not believe and live the Faith, publicly as well as privately? Would he ensure that Catholic schools would be places where the Faith would be guaranteed to be passed on to students?

Would he get rid of his chancery personnel who did not understand that their primary job was to assist him in the salvation of souls? How about placing an emphasis on things spiritual as opposed to material or purely political and prudential?

See, as we delve deeper into this, things get a little more serious-minded. And then, of course, we have all the "other" issues like:

Does he promote Latin Mass, discourage or even disallow girl altar boys, so-called eucharistic ministers, the tabernacle in the middle of the sanctuary, promote ad orientem, at the very least? What about the question of music in the Mass and so forth?

And of course, given the current state of affairs, are they absolutely transparent? Are they playing games and keeping somethings concealed or are they open? Do they make public the diocesan financials? Let you know what they spend on lawyers?

Are they distant and remote, or are they available to the people? Have they instilled in their chancery personnel a sense of service and not bureaucracy? Are they good stewards of your money, and are they forthcoming about how it is spent?

Each bishop would have to be "scored" according to each category or issue item, and an overall score worked up.

Different people would, of course, have different views, but what would emerge would be a kind of general consensus of how "good" their bishop is.

Why does all this matter? Because in an age when it's fair to say that most bishops would perform poorly on such examination, the laity have a right to know and even a duty to ask these questions. Why? Because they have care of our souls. They are our spiritual fathers, and if they are weak men, then we have a duty to remind them to shape up, for the good of our souls as well as their own.

They have the authority, but that doesn't mean we don't share in the responsibility. Too many Catholics today, perhaps because of wishful thinking, are over the moon when a bishop says something that even sounds remotely Catholic. And presto, the Catholic social media world instantly labels him a "good" bishop. But is that true? After all, even a broken clock is right twice a day.

Do they preach very clearly on Hell and sin and the need for confession? This Vortex has presented what probably amounts to a scratching of the surface of this issue, but as the list of items grows, it becomes clear that more and more bishops begin to score lower and lower.

We offer all this as a means to say the Church has a long way to go. For decades, most of the current leadership was not taught to care about most things on this partial list. Most faithful Catholics sense this truth; the bishops as a whole are viewed as distant, unattached bureaucrats who don't really care about the souls of the sheep and are focused on money.

They live pretty comfortable lives for the most part — the senior ones among them more than comfortable. All their earthly needs are taken care of until they die, something some of their sheep don't even have.

The image of the bishops now is one that should greatly and deeply disturb any good ones among them. That image is one of craven or lazy, money-hungry, arrogant, distant men who have little regard for their sheep. They are seen as having let the Church fall into massive disrepair, and in some cases even pushed that along.

They are not viewed on the whole as a group of men who are moral and holy, but as political pragmatists. This is why they should be deeply concerned and we should be deeply concerned. The welfare of the Church — as the bride of Christ — doesn't seem to be high on their list, and there is ample evidence to suggest that not many of these men are "good" when viewed objectively.

That last statement is so true that many Catholics view this whole disaster as one of where too many bishops actually no longer possess supernatural faith or believe Catholic teaching. If there are "good" bishops, they had better begin thinking in all these terms and addressing all of this now. That's what a "good" bishop would do, after all. 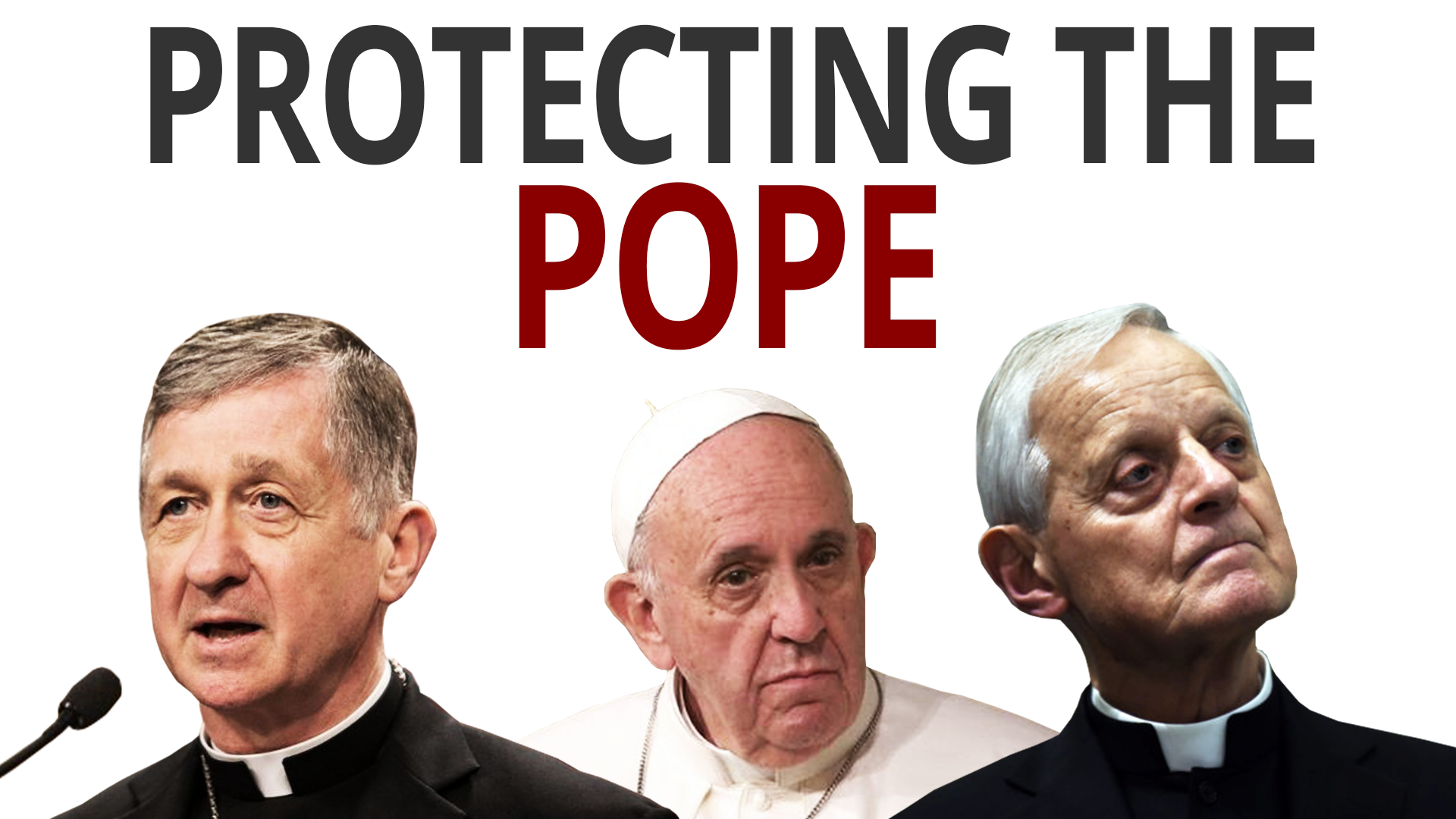 Protecting the Pope
At all costs — even eternity.