Do not first call the Establishment which has caused this issue. Your first call should be to the cops and to the state attorneys general office. Then and only then, call the diocesan reporting hotline. What criminals get to say to their victims, "Call us to report the crime, and we'll handle it from there"?

Good grief — the diocese and chancery personnel should find out about your case when you have a police report in your hand or a form you filled out for the attorney general. You can happily slide that across the desk to Msgr. Cover-up, and even if your case has passed the statute of limitations, there is now an official public record of it.

See, it's part of this whole wrong-headed "we know best" ecclesiastical mindset. It's not that they shouldn't find out; they just shouldn't be the first. In some dioceses, these victims' compensation committees come with the obligation to forswear any further action in exchange for a payout or a payoff, depending on how you look at it.

Again, wrong; victims should absolutely be compensated — that's the least the modernist bishops and their staff can and should do. But the idea that "pay the money and it goes away" is simply not acceptable.

The same modernist establishment that is bringing you this wrong-headed approach is the same one pushing the Alpha spiritual poison, wrecking your churches, uprooting tradition — in short, destroying the Church.

And here's a point to consider: Had it not been for the legal cases and lawsuits, none of the rest of their malfeasance would have been exposed either. It has taken these dreadful shocking revelations to unmask these men and show what monsters they really are.

All of this is related, the filth is all the same, whether it's sexual, liturgical, moral, financial, theological, it doesn't matter — it's all interrelated. You can't be one type of man and another type of bishop. Either you are on the side of God and the Church and truth or you are not.

What is happening right now, still in its nascent form, is a new way of governing the Church is coming into being. Not so heretics and radical feminists can seize control and push for even more heterodoxy, but that authentic Catholicism can once again be protected, liberated from the clutches of evil wicked men in miters who have participated in this filth — all the filth.

All over the country, small lay groups — faithful, believing, authentic Catholics — are beginning to form.

They are meeting in each other’s homes, getting in touch with faithful priests and are simply side-stepping the establishment with its built-in error.

In truth, it's been going on in fits and starts for a while now. Homeschooling efforts, private Catholic schools that have nothing to do with the local diocese, small parishes where Mass is offered with reverence and solemnity and so forth.

These little collectives understand exactly what's going on, and they are not about to be caught up in it. This "restoration" mindset is responsible for the existence of Church Militant, for example, and other online Catholic sites.

In fact, in many ways, the work we and others do online has been a contributing factor to this phenomenon.

It's not quite a movement, per se, but it's close. The more the evil is exposed within the unfaithful clergy and bishops, the closer this comes to being a movement.

People are looking around at the massive devastation to the Faith, the loss of faith within their own families, their former friends, college buddies, workmates — everywhere. Not one single aspect of societal life has been left intact owing to modernism.

And it was the evil accepted by wicked prelates in the Church that set all of this in motion — the meltdown of not just the Church, but the culture as well.

For as the Church goes, so goes the culture. This is why decades of James Martins and Thomas Rosicas were allowed to happen by bad bishops and bespotted so that the Church would begin to change the world from a largely acceptable vineyard in which to evangelize to a hostile environment of spiritual insanity.

These men want the Church destroyed — period. But with their wicked designs came the collateral and associated damage of criminal sex abuse which became public. And that's why they are so desperate to deal with this in most expeditious, denying, downplaying manner possible.

So yeah, don't give them the luxury of going back to their smoke-filled rooms so they can hatch the next phase of Operation: Destroy the Church.

Call the cops, go public, call the newspapers. There's only 24 hours in a day. And the more of those hours they spend having to deal with this monstrous evil of their own making, then the fewer hours they have to continue to destroy your faith and the faith of your loved ones.

And be certain of this: Destroying the Faith is the top goal here. Fight them. Call the cops. 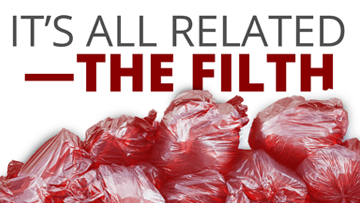 It’s All Related — the Filth
And your damnation is the goal.