The collapse of the Church in America began right here in Detroit in the 1960s under a man hailed at his death by secular media giants as "the most liberal" churchman in the country.

Cardinal John Dearden was "woke" before "woke" became a thing. And for the record, being "woke" began in the Church long before it assailed the culture. In fact, "wokeness" in the culture owes its existence first to dissidents in the Church. And among the leaders, none plays as prominent a role as Cdl. Dearden.

For example, hardly a night passes on Church Militant Evening News where we aren't reporting on some craziness being proposed at synods and their warm-up periods, known as "listening sessions." The whole "synod madness" was first unleashed in modern times by John Dearden, who in 1969 launched "listening sessions" and the follow-up synod right here in Detroit.

Evil advances when good men do nothing.

The scheme, which Dearden created the blueprint for, was pretty simple: Announce it's time for change and that the voice of the people must be heard; then schedule meetings in parishes where the least faithful can attend and "get on the record" about what the Church needs to change; then gather all the notes, compile a list of grievances and call the synod into being.

Of course, at the synod, only "special delegates" whose agendas happen to conveniently dovetail with the liberal agenda are allowed to speak and make presentations. At the end of the synod, the liberals gather, compile a document making the recommendations they always planned to make, and then publish it. Armed then with their "this is the voice of the people of God" propaganda document, they set off to effect the change they now had cover for.

This first happened here in Detroit in 1969 as a trial run, the lead-up to a giant conference that Dearden named "Call to Action" that would also happen here in Detroit in October of 1976, just a few years after the local synod warm-up act.

And thus was born in the United States the deceptive practice by theological dissidents of stacking the deck with hand-selected delegates, calling a much-ballyhooed convention and producing a document after it was all over that was largely written before the convention, at least in principle.

The 1976 Detroit "Call to Action" convention had more than a thousand delegates from all over the country attend as well as another thousand "observers." The organizers had, of course, tapped their media allies at the New York Times and Washington Post as well as local Detroit papers to write glowing stories and pump into both the Catholic and secular bloodstream the notion of a "new Church,"  a "Church of Tomorrow."

It all worked beautifully.

Dearden's "Call to Action" convention was actually an official event of the U.S. bishops' conference. But so closely did it follow Dearden's synod blueprint from seven years earlier — from 18 months of "listening sessions" in five dioceses around the nation to the actual convention in Detroit in 1976 to the final document and the bishops' conference response — it set in motion affairs that are now causing the Church to die in America.

It was directly because of that "Call to Action" convention that the entire so-called social justice initiative was born in the Church and slammed into overdrive under the then-president of the bishops' conference, Cdl. Joseph Bernardin, the protégé of Dearden, who was indeed hand-selected by him a few years earlier.

Dearden's "Call to Action" convention has, of course, come and gone, but its effects remain — in fact, they have metastasized in the Church. Those thousand-plus delegates left Detroit and went back to their respective dioceses hell-bent on instituting anything and everything they could to change the church in the United States. And, boy, did they ever.

Social justice offices were set up in dioceses all over the country; offices for gay outreach began emerging; homosexual groups (like Dignity) started forming or accelerating all over the Church; a new emphasis on dumping all traditions gained traction everywhere.

All of this happening in the Church fueled everything happening in the culture and gave structure to radical societal change; the unleashing of anti-family contingents, pro-sodomy factions and so forth.

By the time the 1980s dawned, all the seeds or time bombs were securely in place. All that would be needed would be a generation, perhaps two, for it all to explode. Dissidents, liberals and architects of societal upheaval are all good at planning the big-vision stuff.

Likewise, conservatives are horrible at it. This needs to change. Evil advances when good men do nothing.

The reason we have gone through this little history lesson today is to officially announce Church Militant's very own "Call to Action" convention to be held here in Detroit in late August. Since it all began here in Motown, we decided it would be fitting to begin the process of reversing all this theological and cultural chaos right here where it all began.

While the name of the building has changed from Cobo Hall to Huntington Place, it’s the same facility. And for those following closely, it's also the same building where all the cheating was going on in Detroit in 2020 during the vote counting when they covered up the windows so poll watchers couldn't see the cheating.

The thrust of our "Call to Action" convention will be exactly the same as Dearden's, only in reverse. Its aim is to equip you with actual hands-on training to go back and reclaim the Church and the culture. There is a counter-revolution brewing both in deeply religious circles and in solid political conservative circles, and that counter-revolution needs a jumping-off point, a blueprint to follow.

Church Militant is the only Catholic organization capable of pulling off something like this. And yes, the entire effort needs to be led by faithful Catholics, inspired by a universal vision — a Catholic vision.

So the Church Militant "Call to Action" event will have as its chief aim the universal change for the culture — change for the better. At the heart of it will be dozens of experienced panelists instructing you on how to effect change in all sorts of arenas, the nitty-gritty of battle. You'll hear from and be able to ask questions of notables from every field of engagement in the Church as well as the culture, with a heavy emphasis on how the two overlap.

Like Dearden's destructive "Call to Action" convention almost 50 years ago, we are also aiming for a thousand men and women dedicated to getting into the fight. This will not be a convention of whining and speeches about what we all already know and agree on, but a training session to arm you with what you need to know to bring about the change; the reversal of the chaos that has gripped the culture and that is so demonic in its roots.

It is a spiritual war, but the fight cannot be contained to just the spiritual plain, because the destruction happens on the temporal plain as well. It must be fought on two fronts — spiritual and temporal. We're going to be speaking about all this and much more, but if you want details and want to sign up now for your credentials, please go to the link and do so.

Conservatives are great at talking and making points, but when it comes to actual hand-to-hand combat, organizing and effecting change, they are certainly nowhere near as good as the forces of darkness. This "sit on your butt and post on social media" approach has got to change. Signing online petitions — used to covertly capture your email address for future fundraising — is useless. They are also deceptive because they delude you into thinking you have done something and that you are "in the fight."  You aren't.

Likewise, listening to podcasts that have no purpose other than to get you all hepped up, how does that effect change? It doesn't.

There are many things that need to be done in the actual world, not the virtual world.

That requires a physical presence. not just a virtual one. We are human beings who need to be in each other's actual presence as well. The communists know this, and they are very good at it. They stage protests; they hold conventions; they bring about actual change.

This is why Church Militant is sponsoring our "Call to Action" convention: to network in person, instruct in person and assemble for battle in person. Please make the commitment to be here in Detroit by clicking here.

You are being called to action. Answer the call. 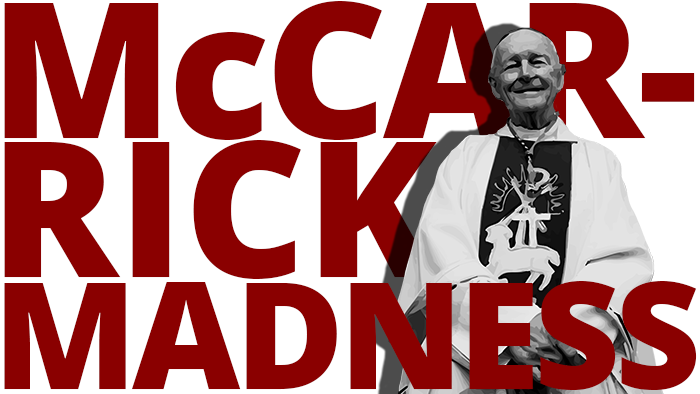