Probably for the last time.

You may remember your mom saying to you, "Never talk about religion or politics."

Well, here at Church Militant, that's all we do. And for the record, my mom, Mother Vortex, never said that. It was just the opposite — but I digress.

Catholics have traditionally voted and been involved in U.S. politics in numbers far greater than their percentage of the population. That's something that political parties have noted in the past, most recently President Donald Trump when he was still just Candidate Trump.

In 2016, Trump scored gains among Catholic voters and may have been the first Republican who did better with Catholics than the electorate at large. There is a dispute among the so-called experts about that stat, however. Exit polls showed him beating Hillary among Catholic voters by 4% while losing the popular vote by two points.

If that's true, Trump likely owes the White House to Catholic voters, who gave him the majority of the vote in blue wall states of Michigan, Wisconsin and Pennsylvania. Hillary failed to produce the so-called Catholic margin that Obama did in 2008 and again in 2012.

In fairness, a later academic survey claimed he lost Catholics by three points. But that would be a whopping seven-point swing between the exit polls and the later survey, so it remains an open question.

Church Militant will be your leading Catholic source for news and coverage of Campaign 2020.

But however you slice it, Catholicism is a major factor in 2020, even in the face of a shrinking Catholic population. Trump, as he did in 2016, already has an active Catholic outreach in his campaign.

However, the only candidate from the Party of Death who openly claims the label "Catholic" is Joe Biden, the pro-abort phony — who was denied Holy Communion a couple weeks ago by a good priest in South Carolina — who is also singing hymns on the campaign trail.

Aware of Trump's appeal to a seeming majority of Catholic voters, Biden is courting them, if even in a low-key kind of way. In Dubuque, Iowa last week, specifically Dubuque County, he sounded pretty devout, as you might expect.

Dubuque has the nickname "Rome of America," and is one of only 74 counties out of 3,000+ that has a Catholic majority. So Biden used the opportunity to play up his faith, talking about it, but saying he doesn't seek to impose it on anyone.

Notably, his campaign manager Greg Schultz is Catholic as well, and repeats the same mantra often on behalf of Biden in numerous press interviews.

Trump was able to secure his victory, at least in part, by convincing white working-class voters, especially in Midwestern rural areas and small towns, to get out and vote for him. Many of those places, like Dubuque County, also happen to be heavily Catholic.

In 2016, Trump won the county by roughly 500 votes, out of more than 45,000 cast. While the margin was razor thin in the more urban county, he cut deeply enough into it to neutralize it. That allowed him to secure a majority of Catholics in the more rural areas to win the entire state by a 51–41 margin over Hillary.

That win, incorporating a Catholic strategy, put Iowa in Trump's column by the largest margin for any Republican since Ronald Reagan in 1980, and that is a hallmark accomplishment.

Biden still has to get past the raucous Democratic primary process, which changes frontrunners and margins almost daily.

One thing to keep an eye on, as a kind of political crystal ball for next November, is to see how Biden performs specifically in Dubuque County among Catholic voters in the Iowa caucuses — which, for the record, are less than 90 days away. Yes, you heard that right — February 3, it all kicks off in Iowa.

Two points worth noting in Campaign 2020: First, this may be the last election where the Catholic vote is so important. With the rapidly decreasing Catholic population as a share of the overall population, coupled with the upsurge of those with no religion, 2020 may signal the end of any intense politicking for the Catholic vote.

A short while ago, so-called nones (those professing no religious adherence) overtook Catholics as the most populous group in the nation in terms of religion, or lack thereof. In 2024, that lead will increase significantly, as the consequences of horrible catechesis drives more young people from the Church, and the culture remains unchallenged by compromised bishops.

Second point to note: Too many of the U.S. bishops equivocate on important topics like abortion, pushing a substitute morality instead, where issues like immigration and fake man-made climate change take center stage. Those issues are made-to-order Democratic talking points and play right into the hands of the Party of Death.

So we are left with the very interesting and curious situation that a man like Trump is actually pushing policies more Catholic than the Catholic bishops.

Church Militant will be your leading Catholic source for news and coverage of Campaign 2020 as election day approaches — now just 357 days away. And yes, we will be doing a lot of talking about it — religion and politics. 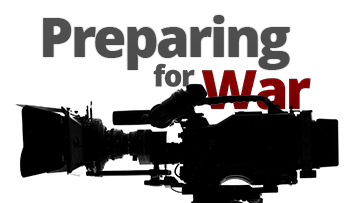 Preparing for War
Because it's getting real.