Given that this is the anniversary of the largest terror strike against the United States in its history, it's fitting to recall that the motivation for that attack against the Twin Towers was the destruction of America. It was not to merely injure the country or weaken it or soften it up and cut it down to size. It was to destroy it. Period.

And so now to pivot to the upcoming election: How are the Democrats any different in their stated aims. They want America destroyed. And they are pretty darn close to accomplishing it. Using a crafty combination of propaganda, phony science and appeals to emotion, the Marxist crowd in the United States has constructed a narrative that says, "America is bad and must be replaced with a new understanding of America."

By seizing on past injustices and sins, they have developed a plan to make the entire history of the country seem evil and inhuman (and, therefore, in need of overthrowing). For the moment, they must work within the boundaries of a supposedly free election.

Democrats want America destroyed. And they are pretty darn close to accomplishing it.

Recognize, however, if they win, this may be the last presidential election in America — or the first in a series of purely manufactured elections with a predetermined outcome already baked in. That's the whole point of this mail-in balloting scheme — to completely throw into confusion the results of election night.

This is not just absentee voting. Absentee voting is just casting a vote ahead of time because you know you won't be able to be at the polls on Election Day for some reason. This is an organized campaign to get as many people as possible to not show up at the polls on Election Day so an air of uncertainty, of unknowingness, of no-conclusion hangs over election night, and the country is prepared for a long, drawn-out, ongoing supposed "vote count."

The problem is tracking these ballots. So far, any effort on the state level to do mail-in voting on a large scale has proven completely unworkable. Some public officials have been charged with vote fraud. Counties and states have had hundreds of thousands of ballots rejected owing to miscounting, mismanagement and overall chaos.

There's a reason the election happens on the same day in all 50 states — because it makes sense and it works. The Marxist Democrats are keeping up the Wuhan virus scare in an attempt to terrify enough voters into voting by mail and not showing up at the polls.

Then, after the polls have closed, the mayhem can begin. Dead people's votes can get rolled into the total. Ballots illegally filled out by Democrats in key counties and states can suddenly appear by the box-load. More ballots end up being cast in a given precinct than there were eligible voters to cast them in the first place.

It's not the voting that's democracy; it's the counting.

As some old sayings go, "It's not the voting that's democracy; it's the counting." And a saying from a Third World dictator — Nicaragua's Anastasio Somoza — sums it up perfectly and fittingly: "Indeed, you won the election, but I won the count."

From a Catholic point of view, it would be difficult to imagine a greater sin — a greater fraud perpetrated against the people of a nation built on free elections — than a massive fraud negating their votes and canceling out the actual results.

What's the theft of a few hundred thousand votes here and there on the days following the election? As further evidence of the diabolical involvement in this great unfolding spiritual war, the Party of Death is deliberately setting the stage for post-election-night chaos.

Chaos is the stock and trade of the diabolical. Theft, lies, deception — all in the ultimate service of child-killing: Do you still need convincing this is a spiritual war? 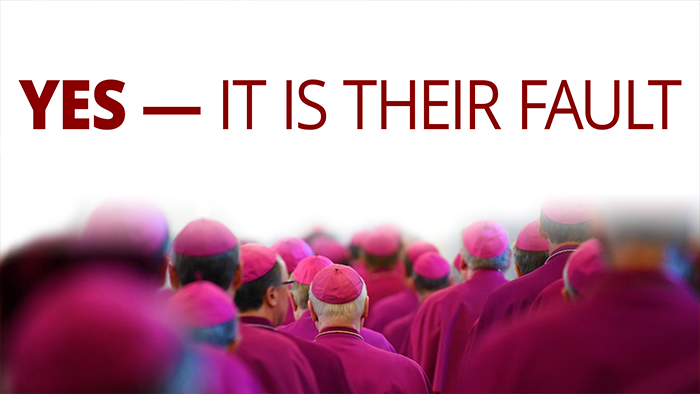 Yes — It Is Their Fault
Who else's fault would it be?