It's all about the 'ka-ching.'

One of the more disturbing areas of scandal to be revealed in the midst of the sexual depravity in the ranks of the clergy is the financial malfeasance — and it is malfeasance. There are so many aspects to the financial corruption it's hard to fathom.

There is the poor stewardship, the rejection of patrimony, the misappropriation, the financing of sinful lives, the built-in attitude of ownership as opposed to custodianship — meaning, it's not their money. It all adds up to financial abuse.

Consider, for example, who's paying for James Martin to fly all around the country and the world to spread his homoheresy? Who pays his restaurant tabs? Who pays the freight charges for shipping his books to the venues where he sells them?

And on a much larger scale, who paid the outrageous bill for his education? At the end of the day, we did. All of the money bishops or religious superiors spend is really the money of the laity. The Church establishment is like the federal government: It doesn't make money, but uses people's money.

Every diocese operates the same way, and even if some of the income is derived from investments, where did the initial investment money come from? The laity.

Some archdioceses or orders in America are sitting on vast sums of wealth, in either real estate holdings, like New York, or cash in the bank, like Portland, or a hundred other means: investments, annuities, side business operations, estate inheritances and so forth. Over the decades, these sums of money have swelled to hundreds of millions of dollars.

Here in the archdiocese of Detroit, for example, various auxiliary bishops routinely travel down to the Cayman Islands and stay in a pretty well-fitted-out condo.

The archdiocese is about to announce its heretofore secret plan to launch a $200 million fleecing of the flock — again. And in typical fashion, when money is desired, the laity are the ones who are bilked.

It is they who have caused the great destruction of the Church. They did not, and still do not, teach the authentic faith, and as a result, tens of millions of people have left. Financially, that translates into a disaster, so they want to place the burden of that on the backs of the few who have not left and remain faithful.

Vigneron went out and hired the most expensive law firm in the state of Michigan early last year to oversee the squirreling away of all the archdiocesan assets to shield them from lawsuit liability.

The billable hours from that transaction must have been quite large, but the laity is never told what that final tab is or even that is was incurred in the first place.

Like all the other dioceses and archdioceses when they start these enormous fundraising campaigns, a video is made and then showed in Masses in place of the homily saying how the money will be spent. Those videos are smoke and mirrors because money is fungible.

They say it's going to the poor or school kids or charitable work or whatever — that's not necessarily true.

Money that should have gone to those causes was already spent on lawyers or pension plans and consultants and high salaries for the chancery top dogs, and now the money being collected now is simply refilling those money bags.

While charities do get funded, the money flow is not what it is made out to be. For example, various outside marketing and consulting firms are brought in and lay out a large multi-year financial plan, which includes the fundraising campaign but also includes a complete fiscal overview over which parishes should be shut down next.

The parishes that make money are kept open, the ones that don't are closed down.

Now you will hear that the reason parishes are no longer solvent owing to the drop off in population in a given area is because of demographics — people moving around — leaving one area and going to another.

Like the theology of the Church of Nice, that explanation is incomplete — and intended to be — making it deceptive.

Yes, people are moving around over many decades, but while they have been relocating, they have also been moving out of the Church. That is the real reason we hear nothing but the poor mouth from bishops. A dramatic decrease in the number of rear ends in the pews is the cause of all of this, not demographics.

If even half of the baptized Catholics in Detroit went to Mass, there would never be a pretended need for these fundraisers, and that's true of every diocese.

But here in Detroit, as in other locales, the real issue isn't so much an actual need. Insiders tell us that Vigneron and his bean counters aren't even sure what to do with the money they plan on collecting. There are no firm plans, which means the need is completely fabricated.

They want to get the money out of as many older Catholics as possible before they die off because once they are dead in the next half generation or so, that'll be it.

Their children don't go to Mass — again, owing to the horrible, ineffectual catechesis for the past half-century — so bishops like Vigneron know there won't be any more large-scale collection efforts that will be successful, not from the faithful laity, that is, because their numbers will be small.

This is a one last "cash grab" — a kind of "get it while you can because it won't be there tomorrow" type thing.

No faithful Catholics begrudge the Church the necessary finances to run. That's where all the money came from to begin with. But — and it's a big but — they and we absolutely begrudge being fleeced to support a system that has failed theologically, catechetically, educationally, liturgically and spiritually.

To turn around after shoving programs down people's throats like Alpha, which is pure Protestantism, and ask Catholics to fork over hundreds of millions of more dollars reveals the true arrogance of the episcopate these days.

It's like medieval land-baron bishops running their fiefdoms with zero accountability. These men refuse to live like the rest of the flock: within a budget. Detroit already taxes parishes more than 10 percent, runs an annual campaign to fund extracurricular activities and now wants another $220 million because they know they won't be able to get it in a few years.

And this mindset is not isolated to Detroit. We find out about this because various clergy and Catholics are very unhappy about it and feel like it's taking advantage of the faithful, not to mention in the worst crisis of the Church's history — the cries for "give us hundreds of millions of dollars" seem ill-timed.

This is little else than cash register Catholicism, and when you consider how so many of these men have sold out the faith for the past 50 years, cash is about the only thing left to focus on. 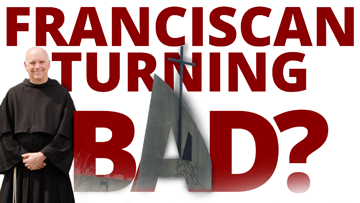 Franciscan Turning Bad?
There is precedent.