The political season hasn't really even gotten into gear yet, but the political posturing and positioning certainly has — and Catholics, in particular, should be paying close attention.

First, last week, The New York Times published a pre-election analysis that pointed to the fact that millions of Americans who back in 2016 said they didn't like [President Donald] Trump, have now changed their minds and come aboard the Trump train.

While his overall favorability rating is still below 50%, it has increased 10 points since 2016, and that news sent the loony left into a social media meltdown from which they haven't yet recovered; some even demanding The New York Times take the story down.

Now the news — specifically Catholic — Trump won the Catholic vote in 2016 52%-48% over the wicked Hillary Clinton.

This year, it appears right now, although nothing is ever certain in politics, that Joe Biden, a Catholic — although in name only — is in the lead among the 245,000 other Democrats running for the nomination.

If he were to win, that would set up quite the clash of orthodoxies for U.S. bishops, who almost to a man hate Trump and never miss an opportunity to strike out at him to cover their own multitude of sins.

The clash would be how they could publicly get behind a Biden presidential run when Biden is an avowed, committed, never-look-back supporter of child murder.

This very topic was homed in on on Fox News last week by Martha MacCallum, a devout Catholic, during an interview with Cdl. Raymond Burke.

Burke flat-out laid it out.

Not just the Catholic vote, but actual Catholic involvement in next year's election here in the United States could be the pivotal deciding point for who wins.

It's one reason, not the main one, but an important one nonetheless that Church Militant is retooling and equipping our studios here in Ferndale to be the source of news and information for Catholics during the upcoming campaign season.

One very important fact that has largely gone under the radar so far is the importance of Texas, once considered impenetrable by Democrats, a virtual lock for the GOP.

If the Party of Death could capture the Lone Star State in 2020, that would almost completely guarantee a defeat for Trump.

Texas has 38 Electoral College votes, absolutely critical to the Trump campaign. If Texas went blue, even by a whisker, the Democrats would seize the White House.

So how possible is it that Texas could turn? According to the phony Hispanic candidate Robert O'Rourke — who goes by the name "Beto" to pull an Elizabeth Warren on Hispanic voters — he says Texas is in play this year.

He made the claim in one of the debates a couple of weeks ago and has some history to back it up.

Prior to Church Militant's recent Strength and Honor Conference, we had an opportunity to sit down with the president of Texas Right to Life, Jim Graham, who was up for the conference.

Graham has his pulse on Texas politics perhaps better than any other person in the state, and he sees dark clouds on the political horizon.

But most troubling for Graham, and especially related to the all-important Catholic vote in Texas, which is much more so Hispanic than most other red states, he says too many of the state's Catholic bishops are working behind the scenes for the Democrats, even down to how they personally vote.

With potentially one-third of Texas bishops, perhaps even more, actually casting votes for the Party of Death, the state must now become a focal point, perhaps more than any other in the country, when assessing Trump's re-election campaign and the Catholic vote.

Cardinal Burke has been down this road before. In 2004, as archbishop of St. Louis, he created a major controversy when he said then-Democratic presidential candidate, Catholic-in-name-only John Kerry, could not receive Holy Communion owing to his obstinate support of abortion.

Burke was plotted against by serial homopredator Theodore McCarrick and Donald Wuerl, who covered up for and lied about McCarrick's filth, something he still does to this day.

McCarrick lied to the bishops, with Wuerl's knowledge, about a Vatican answer to the U.S. bishops question about whether Holy Communion should be denied to pro-abort Catholic politicians.

The Vatican had answered in the affirmative, saying, yes, such child killers were not to be admitted to Holy Communion.

But McCarrick, who was still sexually assaulting seminarians in the Jersey Shore beach house, simply lied and said the Vatican has said no, it was OK for them to receive.

He had deliberately quoted from an only semi-related footnote, which made it appear it was OK, but the footnote had nothing to do with the question about actual pro-abort politician themselves.

Regarding them specifically, the Vatican's Cdl. Joseph Ratzinger, who wrote the decision for the U.S. bishops, has flat-out, unambiguously declared, no they cannot receive.

So when Cdl. Burke goes on Fox News and says Biden should not be given Holy Communion, he's right. This all matters, both spiritually and politically.

The positions of the Luciferian Left, like their father, are all built on lies, be those lies political or theological.

The father of lies has been actively trying to corrupt the Catholic Church since the days of Our Lord's earthly mission — remember Judas. In that regard, only the cast of characters has changed, not the war itself.

Much is at stake next year, mostly the truth, and Catholics can expect a major assault against the truths of the Church not only around the nation, but squarely in Texas, and like the case with McCarrick and Wuerl and the rest of them, they can expect the assault to come from various Catholic prelates. 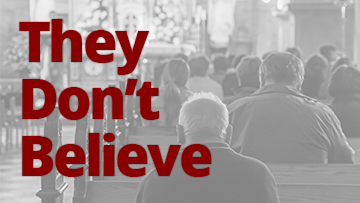 They Don't Believe
This rejection of the Faith MUST be corrected.