Long past the time for this.

May 28, 2021  0
Podcast Available for Premium Subscribers

The transformation to both the world and the Church in just the last year has been astonishing. We hear the stupid "woke" term non-stop in the secular world, which means that you're enlightened; you've awakened to all the rot in the world owing to conservatives and whites.

This "enlightenment" then transforms into an excuse to burn down and destroy everything that supposedly contributed to the past society, the bastion of white-privileged racism. All of it, however, is nothing more than an excuse to get at fundamental Christian truths.

Once that notion that the Church needs to change gets embedded in people's minds, then the soil has been sufficiently tilled.

The police have to be defunded because that whole "law and order" thing is racist. In fact, the whole system is racist, racked with racism from top to bottom. It's built on racism imported by white European men whose religion was Christianity and whose moral code derived from Catholicism.

Racism, in fact, has become the trump card not only in the political order but also in the Church. For a variety of reasons, Churchmen in the United States have picked up on the racism narrative and are exploiting it. Some of these bishops are just going along because they want to feel relevant and always be on the cutting edge of events.

But for others, the whole woke movement feeds into their larger plan of transforming the Church into a worldwide NGO (non-governmental organization) with the aim of globalist theology supplanting the Church. They don't want to actually get rid of the structure of the Church, just the Faith and its teachings that inhabit the structures.

And frankly, they've done a great job at that: Most Catholics no longer believe anything of the Faith. They don't go to Mass; they don't believe in the Real Presence; they haven't been to confession in years, if not decades. But they all do believe they're going to Heaven when they die, thanks to Bp. Barron's self-indulgent ramblings that we have a reasonable hope that all men are saved.

Various bishops and priests who claim to be Catholic want to import the entire woke insanity into the Church because it helps deform the Church. It also doesn't matter what the particular flavor of "wokeness" is at a given moment — it could be racism, sexism, transgenderism, immigration, climate change — it doesn't matter. All of them provide an opportunity for dissident bishops to declare the Church needs to change.

And once that notion that the Church needs to change gets embedded in people's minds, then the soil has been sufficiently tilled. It's only one last step for people to think, "Well, the Church changed on all that stuff, so why can't it change on everything?" And presto — no more Church. And we're almost there.

That's why Catholic laity have to experience their own version of being woke, of waking up to this rot and evil. And this pertains to men, in particular — Catholic men. The good news is that more men are waking up to all this. The bad news is that it isn't happening at anywhere near the rate it needs to in order to offset the likes of Cupich and others.

But you'd be mistaken if you concentrated on just the marquee stars of the corrupt Catholic elite. True, they have the power and wield the scepter, but there are thousands of others in league with them who are every bit as corrupt or malformed. They're just not as ambitious and sneaky and cunning.

But they all agree on the agenda. This happens not in some dicastery in Rome, but in your parish, school, Bible study or men's group. Errant ideas from the culture are smuggled in using theological vocabulary (just see James Martin if you need a reference point).

These secular, woke ideas are spiritualized, baptized and packaged as somehow being Catholic. That's what Dallas bishop Edward Burns did a few days ago in his cathedral with a ridiculous Mass of Remembrance on the anniversary of the George Floyd killing. Of course, the entire event was brought to you courtesy of the woke racism narrative.

Burns failed to mention that, at the very instant they were lighting candles, ringing bells and weeping in lamentation, the real racism was occurring just a few streets away as Black babies were being slaughtered in abortion chambers — just as they are being slaughtered every day. Planned Parenthood is targeting those children because they are Black. Planned Parenthood is profiting from a system of actual racism imposed on the Black community by Democratic Party policies that have destroyed Black families, eradicated their schools, created a network of gangs and lead to a continuing rise in Black-on-Black crime and homicide.

Curious how none of that got into the bishop's homily. It never does and it never will because the truth about racism is that it is brought to you by the very people constantly whining about it and who also profit from it — think Al Sharpton, Chris Cuomo, Don Lemon, Wilton Gregory, the USCCB.

Until Catholic men become truly woke, the Church will continue to descend even deeper into the darkness. That's why this year's Church Militant Strength and Honor Conference is zeroing in on this specific topic: "Catholic Wokeness."

Two of our speakers will be Fr. James Altman and Jesse Romero, both great friends of this apostolate and the work we do here in serving Catholics.

Jesse, Father and I will be deconstructing the lies, presenting the truth and then telling you what you need to do about all of this once you're back home. Strength and Honor will be here at Church Militant the first full weekend in August. There are some tickets remaining, but not many. Reserve yours today.

Now is the time for all good men to come to the aid of their Church.

If you are a Catholic man, a father, son, grandson, nephew, uncle, brother — this is for you. You need to understand that you are the target of the woke movement — your beliefs and how you live out your life. You need to get woke yourself. But beyond woke, you need to mobilize, take action to combat the woke culture coming to dominate in parishes and chanceries all over the country. It's your duty as believing men to put down the golf clubs and pick up the sword. But you need knowledge, companionship, spirit and drive. And you need a plan.

That's what our Strength and Honor conference/retreat is all about. Click here to get yourselves to Church Militant the first weekend in August and hear from people who are in the trenches every day so you can make the commitment to get into these same trenches.

Now is the time for all good men to come to the aid of their Church. Get woke — authentic woke. 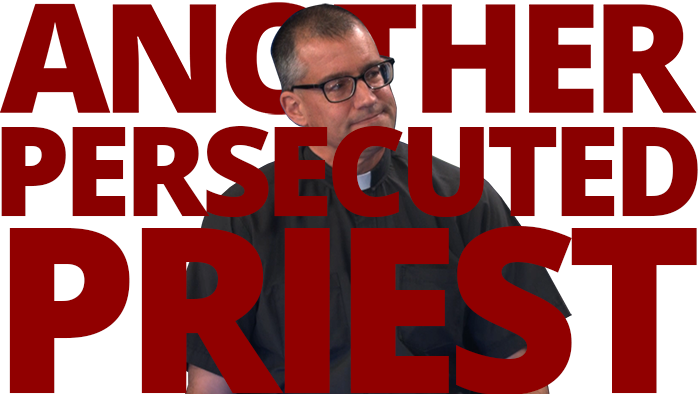 Another Persecuted Priest
Bishop kicking him out of the priesthood.