It's not national; it's regional.

If you think Catholicism is not going to have a vital role in Campaign 2020, then you don't have a pulse. In fact, the mythical Catholic vote will more than likely have an outsized influence on this campaign. Why?

First, there's the geography: Candidate Donald Trump became President Donald Trump directly by winning Pennsylvania, Michigan and Wisconsin. Trump finished with 306 electoral college votes. Combined, those three states gave Trump 46 of his 306. A candidate needs 270 to win. Without those states, Trump falls short by 10. And Trump not only broke the Democratic stranglehold on those three states — part of the so-called Blue Wall thought impenetrable — but he snatched back Obama's Ohio and Iowa as well.

Those five states represent 70 electoral votes — a little more than a quarter of the total a candidate needs to reach 270. Before Trump, they were pretty safely blue. After Trump, Ohio is a graveyard for Democrats, Iowa is turning deeper red and the other three are toss-ups. So Trump has done what prior Republicans could not: He has changed the map.

But why has the map changed? How did he do it?

There are loads of angles that can be looked at here, but one stands out: Each of the five states has a greater percentage of Catholic voters than the national average. The U.S. population of Catholics now stands at roughly 20%. That represents a substantial decrease in the past four election cycles, where it once stood at almost 25%. The reasons for the drop-off are something the U.S. bishops will have to answer for before Almighty God when they die, but that's another Vortex.

Who said the Catholic vote isn't that important?

Given the narrow margins of victory in the big three, if Trump secured a majority of Catholic voters in those states, which exit polling from 2016 seems to indicate he did, then it's lights out for the Dems.

Because of the reality of the electoral college, he doesn't have to win a majority of the Catholic vote nationally, just the strategically located Catholic vote in the battleground states.

The reason the lights would go out on the Party of Death in the White House race if he gets those Catholic voters is another little-talked-about political reality. Catholic voters tend to vote in slightly larger numbers than other groups — meaning, Catholics may only be 20% of the population, but they comprise 21–22% of all voters.

This is one of the underlying realities of why Catholic voters almost always are the bellwether in presidential races: We vote in greater numbers than other groups.

So much for the geography — let's turn to the actual voter, or more specifically the type of person who is a Catholic voter in those important states.

In fact, northeastern Catholics are way overrepresented relative to the national Catholic benchmark of 20%. Vermont Catholics make up 20% of the state's population. And then there's the share of Catholics in:

Yet practically every one of these states is deep blue all the time on every level of government.

If those Catholic voters had been properly instructed in the Faith, America would look very different as a country today. The Party of Death would have no base of operations from which to work because those Northeastern states comprise a total of 75 electoral college votes.

Dixie is still pretty solid red and has a treasure trove of 154 electors compared to the Left Coast's 74. A scattering of remaining Mountain states and some of the Plains states also tend to cancel each other out, and before you know it, there's not much of the electoral map for Democrats to go to in order to get votes.

Speaking in broad terms then, the South is Republican, the Northeast is Democrat, The Plains states are Republican, the Mountains are a mixed bag, and the West is Democrat. These groups are essentially baked in, leaving the handful of Midwest states to be the so-called tie-breaker. In these states, if Trump gets the majority of the slightly more conservative Catholic vote, he retains his ability to cancel out the Northeast Catholic vote and will retain the White House.

That, as the saying goes, is all she wrote.

And who said the Catholic vote isn't that important? In 2020, it's shaping up to be king-maker. 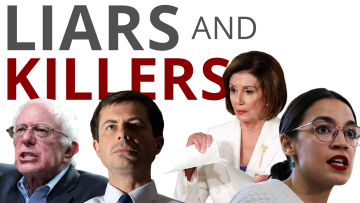 Liars and Killers
And they will stop at nothing to win.