Before we begin today, please say a prayer for the repose of my dear father's soul; today would have been his 90th birthday.

And now to a topic he would have applauded, as well as found quite amusing: the Catholic Commandos and their pitching of Pachamama into the Tiber. Poor ole gal — oh well.

The hypocritical, hysterical response from the usual suspects in and around Rome is really a competition between hypocrisy and hysteria. We'll let you weigh in on which is greater.

First, the hypocrisy: Seriously, the Vatican calling the police to report theft of some wooden statue idols of pagan goddesses clipped from a Church? Do the folks behind the giant anti-immigration walls understand how that looks?

They get all hepped up about that theft but don't call the police about an actual theft of more than half a billion euros from their own accounts by corrupt cardinals and prelates?

The only way the world knows about the half-billion-dollar heist from Peter's Pence by corrupt cardinals is that a private Vatican security notice was leaked to the Italian media, a story that Church Militant was first to report on in the English-speaking world.

So, for the record, "stealing," not really pagan idols — quick, call the cops, create an international incident — have all the usual dissidents and liberals spread the word far and wide that this is more hate of indigenous people.

But stay as closed-mouth as possible, and certainly do not call the cops about your own prelates actually stealing hundreds of millions. The hypocrisy is revolting.

Now, the hysteria: Evil Jimmy Martin couldn't wait to jump on social media and break a nail or two pounding away about hating "the other" — blah, blah.

The usual cast of characters pretending to be objective journalists — like Christopher Lamb and Austen Ivereigh — likewise took to social media denouncing the shameful action — which was exactly what again, guys? Oh yeah, pitching pagan idols into the Tiber, idols that should never have been inside a Catholic Church.

The weak-kneed establishment media, alongside the liberal, pretending to be objective Catholic media, have never done stories on the real theft that has been going on for decades.

How about the theft of billions of dollars from Catholic parents — like mine, for example — who paid for their children to receive a Catholic education only to turn around and see their grown-up children leave the Faith and embrace atheism?

Where are your stories on the theft of hundreds of millions given for the education of priests as seminarians when what was really going on was the ordination of tens of thousands of gay men, over decades — some of whom abused teenage boys — who neither believed the Faith nor promoted it, and lied to parishioners by the millions?

What about the theft of all that money they took for advanced degrees and travel back and forth to Rome and paying for gay hook-ups? Don't see all your moral outrage and indignation over those actual cases of theft.

And while we are on the subject of morality among the supposed objective journalists on the Vatican beat, where is the moral outrage among them for a very well-known colleague of theirs who dumped his wife and took up with another woman and shows no shame about it whatsoever?

Purely for the sake of charity, we aren't going to say his name, but loads of prelates all over Rome and the reporters in that room and pro-gay priests here in the United States know who he is.

So, please, all of you, stop with your fake, virtue-signaling moral outrage over the cleansing of a Church desecrated by pagan idols.

You care nothing for the truth, and certainly have no regard for authentic Catholicism. If you did, you would have been reporting what's been happening to the Church for the past half-century.

Hats off to the Catholic Commandos who forced the issue by pitching Pachamama into the Tiber. It has had the unintended effect of unmasking all of you as well.

Is there a way to submit an application for the process of sainthood while the Catholic Commandos are still alive?

Oh wait, the prelate in charge of the saint-declaring office is the same prelate who got bumped up to cardinal by Pope Francis after the half-billion was stolen on his watch.

My goodness. what a mess; but, then again, Pope Francis did tell everyone to make a mess, and that, presumably, includes the Catholic Commandos. 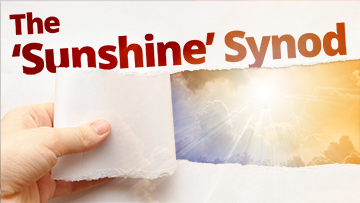 The 'Sunshine' Synod
Sunshine is a good thing.