If you say so.

If there's one thing the Left is usually pretty good at, it's coming up with labels to pin on their enemies. They invent terms or repurpose old terms to demonize their opposition and then repeat them so often in the media that they stick. And they are very good at the language game. So it pays to pay attention when they invent a new term or repropose an existing one, because you can bet that it will become part of the established lexicon in short order.

Within the last two weeks, the theological dissident crowd — closely aligned with the political Left — has given birth to the term "cyber-militia," or "Catholic cyber-militia," to demonize and label Church Militant as well as other operations dedicated to Catholic truth. It has the sound of violence and danger — a class of operators that must be stamped out immediately. The term had never really been applied in the Catholic media world until just the past week or so, and all of a sudden, judging from an online search, it's become the new favorite of the dissident and heretical crowd attempting to smear upstart, faithful Catholics.

So let's look at this word for a moment. Here's the definition: "A fighting organization of non-professional soldiers, citizens of a nation or subjects of a state who can be called upon for military service during a time of need." In the history of the United States, the need for a militia was understood in terms of fighting against tyranny. And that's an interesting point, because tyranny comes in a variety of forms — not just politically.

There is cultural tyranny, something we are definitely heading to in the United States, although that march was slowed with Trump's defeat of Hillary last November. Pope Benedict spoke of such a tyranny, or dictatorship of relativism, shortly before the conclave elected him pope in 2005. But there can also be a tyranny of imposition, even in the Church, where those who seek to overturn tradition have resorted to a tyranny of imposition, ignoring Church teaching, introducing a cavalcade of abuses and so forth. Little by little this has come to be seen as kind of tyranny, where the voices of the faithful are dismissed and the Church is refashioned according to the whims of the liturgical and ecclesiastical tyrants.

Just as the Minutemen formed a militia in the War of Independence, so too have faithful Catholics started finding each other in increasing numbers and banded together to fight the tyranny of the modernist heresy in the Church. Their means of finding each other and taking action has been the internet, and it's interesting that this phenomenon closely parallels what happened with political conservatives during the campaign last year.

The tyranny, both political and ecclesiastical, has been so extensive, so far-reaching, that it has been impossible to raise a voice of concern with practically anyone in authority in the Church and expect that something would be changed as a result, but things don't work that way. Tyrannies, dictatorships, those who try to crush down the spirit, whether it is the human spirit or the Holy Spirit, always find themselves on the losing side of history. Sooner or later they push too hard, and a natural recoil kicks in — a counter-revolution, a reform movement, a militia.

It's happened throughout history. Thuggery only works for so long and is limited in its effect, even if it is brutal. So no one can really be surprised that in the midst of this spiritual insanity of deforming the faithful, abusing the liturgy, advancing the homosexual agenda, allowing Holy Communion for those in mortal sin and much more, no one can be surprised that there would be a counter to all this. Of course,  a reaction would occur , was bound to occur.

If the modernists want to dub it a militia, a cyber-militia because it's on the internet, and a Catholic cyber-militia, then go right ahead — happy to accept the name. If Church Militant and other faithful Catholics are combining forces to fight your tyranny — your desire to introduce novelty and heresy and dissent further into the Church — then we are happy to oppose your tyranny with our militia. But you should bear in mind, we are speaking not just for ourselves, but for the tens and hundreds of thousands of Catholics out there who you have abused, marginalized, mocked and held in contempt for their fidelity. It is they who are finally rising up challenging you and calling your evil into the light.

We are happy and blessed to be a conduit for that along with other sites and organizations, but that is all we are, a conduit. We have no power or authority; all we have is the truth — the truth of what your heresy and scheming and plotting and demolishing of the Faith has done to these people's families and loved ones and friends. How many mothers have cried themselves sick at the loss of their sons to your modernism? How many fathers have worried silently in the depths of their souls about the fate of their children because they were caught off guard in the face of your heresies and dissent? You have invaded the Church and succeeded in lowering and degrading the Faith to a point never before seen in history.

Of course, a militia will arise, has arisen, in fact, that will finally stand up and say, enough is enough — to declare: "It is finished." But pay attention here: This militia is your doing. No one in this fight ever wanted it, didn't start it, wasn't looking for it, but now the battle is engaged, and it is a fight to the death or life, depending on which side you're on.

And these are sides: It is the Church of Nice, which doesn't so much as bat an eye at modernism, embraces it actually in all its many perverted forms, and the Church of Tradition that has survived every assault against Her because Her ultimate protection is Our Lord Himself — His Bride. So stand fast, militia. March ahead, proud to have the title.

Even St. Maximillian Kolbe understood the need to form a militia to fight against the tyranny of evil in his day. His was called the Militia Immaculata, so the precedent of having militias in the Church among the faithful has already been established.

Looks like they'll have to come up with another name, because we embrace this one. 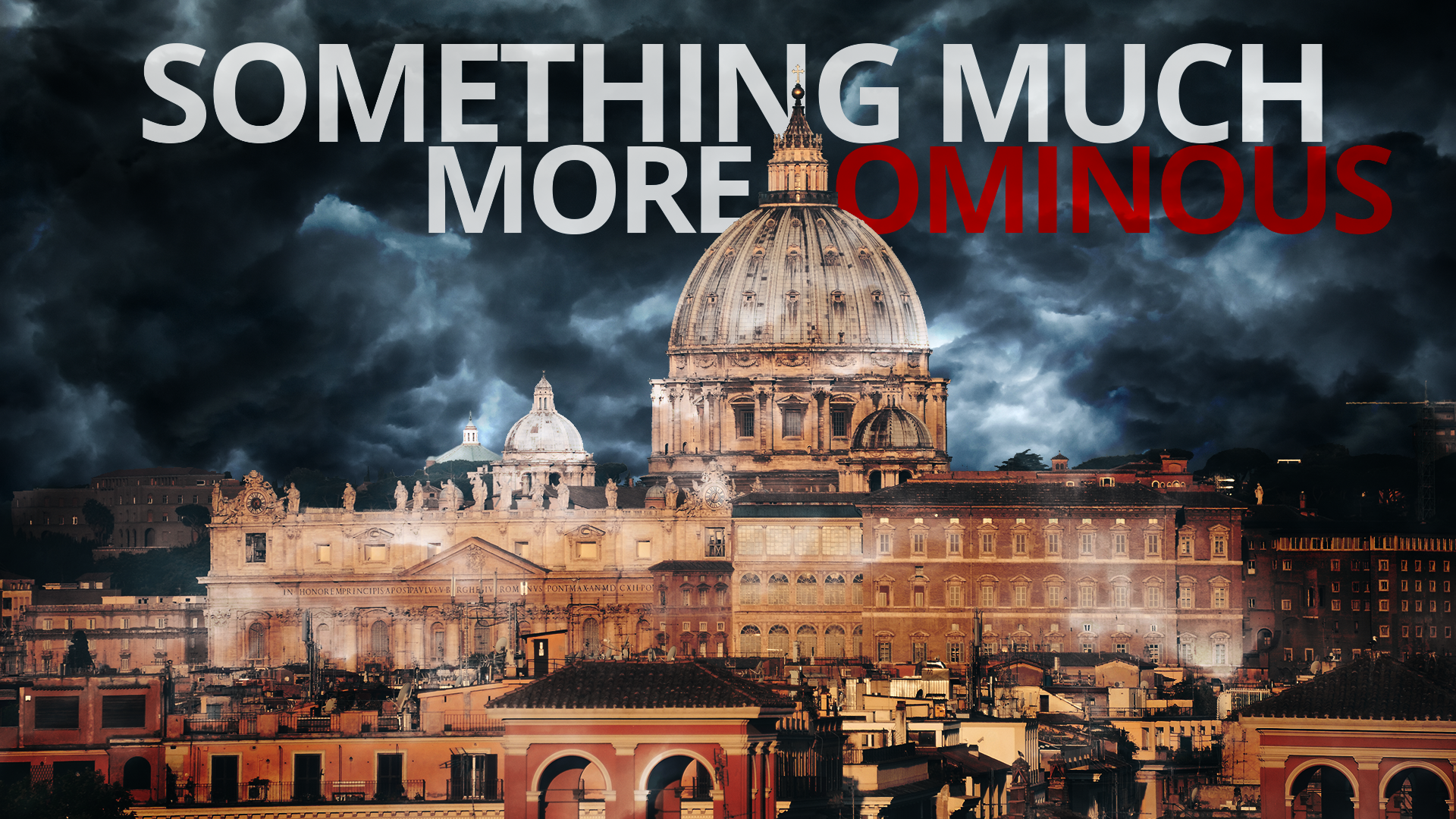 Something Much More Ominous
Rome is in chaos, and no one should be surprised one bit.