Who have their finger on the pulse of everything in the Church.

The war going on in the Church these days, while predominantly a spiritual war, is also a battle of personalities. And those battles are not so easily squeezed into good guys and bad guys categories.

We are all painfully aware of the bad guys, the homoheretic, dissident, social justice, heterodox crowd that runs the show from top to bottom that Viganò called out.

But there is a different battle going on in the good guys' camp, and by good guys we mean the more or less faithful Catholic crowd that largely rejects the theology and politics of the bad guys.

But there's more to this war than just choosing up sides and being a good guy. There is the difficult and delicate question of how to respond to the bad guys.

And this is a war unto itself in the good guys' camp. It could be largely broken down into two subgroups: the "Deplorable Catholics" vs. the "Country Club Catholics."

The deplorables just say it like it is, the "call 'em as we see 'em" crowd.

It's from this group that you hear the calls for bishops to resign, for a RICO investigation to clean house, the demands that bishops start acting like bishops, the condemnation of the homosexual current, the support for Abp. Viganò — in short, the non-establishment crowd.

In the opposite corner are those who consider themselves the Catholic elite, the country club crowd who consider it gauche to speak about such things as an actively gay bishop covering up for his loverboy homopredator priest.

They don't necessarily deny it, they just don't want any discussion of it. It ruins the Chateaubriand just as it arrives at the table.

For them, all this is just so "distressing." But their money or influence or willingness to remain quiet has bought them access to the bishops' establishment, and they get to brag about having just come from lunch with the cardinal.

They get honors and awards for teaching at colleges or writing books that they go on the Catholic establishment media and crow about in all the phony humility they can generate.

They are the sponsors of conferences or the invited speakers at the conferences. They get interviewed by the establishment media crowd because they are all part of the same country club — just sitting at different tables.

You'll find all kinds of niceties and politeness at the Catholic country club. There will be the visible crucifix appropriately placed, with assorted statues and so forth scattered about.

The likes of George Weigel and others will be holding forth in some corner talking about his next book and speaking engagement, neither of which will be of any significance in the great war going on in the Church right now.

It will be an unmistakably "Catholic" environment, true. But you will not hear a word about how to address the war head-on.

Direct confrontation is not allowed on country club grounds. The overarching rule is: in all things, politeness — even if that means politeness dictates we not talk plainly about the crisis.

It's a mindset really — a personality type.

Many of the Country Club Catholics got their tickets punched precisely because they are more like the bishops than the regular Massgoers. They care more about image than reality.

They like hob-nobbing, feeling important, sipping martinis, talking about inane topics and so forth. Their gatherings could best be described with the phrase from F. Scott Fitzgerald: They gather where they can be "rich together."

This is a closed society, no doubt about it, despite the view looking in through the window that appears Catholic.

Real Catholics are born for combat — but not this crowd.

This is not so much the hoity-toity crowd as it is the haughty-taughty one who don't really want much to do with the hoi polloi, deplorable folks outside the country club.

There's just too much for the elites to lose if they started paying close attention to what the deplorables were saying and writing and giving talks about.

They would lose their place at the table of respect of the bishops and other elites they socialize with now.

Carl Anderson from the Knights of Columbus wouldn't invite George Weigel to his summer gatherings, and Tim Busch, who runs the Napa Institute, wouldn't get the rest of the crowd to drop thousands and thousands of dollars per head to "be rich, together."

Doug Keck and Michael Warsaw, who run EWTN and have steered it far away from its Mother Angelica vision and mission, would have a heck of a time getting press passes to cover the bishops' events.

All these "good guys" who do for the moment command the majority of the discussion because of their relationships with the bishops, at the end of the day accomplish nothing.

It's more important to them to feel as though they have accomplished something and tackled the crisis head-on than to actually have done so.

The Church has burned down to the ground while they have been golfing with the bishop and writing huge checks to the annual diocesan fundraiser.

And for what? Have any of them lifted a finger, risked one modicum of their beloved "respect," to help truly fight the evil in the Church?

When Weigel, for example, was writing his tomes about John Paul — which catapulted him into the elite crowd — did he ever delve deeply into the dark side of John Paul's papacy, the sinister influence of Cdl. Dziwisz and the control exercised over him by Theodore McCarrick?

Where are the tomes written about the rape of seminarians by the hundreds — still ongoing, by the way — passed off as consensual sex; the homosexual bishop Daniel Ryan and his foraging city parks for teenage male prostitutes; the embezzling of millions by bishops like Michael Bransfield; the predominant homosexual activity of thousands of men in the priesthood; the persecution of good priests by dissident bishops like Cupich in Chicago?

Can you imagine dropping any of those bombs at the upcoming Napa Institute gathering, or showing up at the next annual national Knights of Columbus gala?

The pearl-clutching would be astounding, including by a good number of the more effete bishops who like using their office to hang around the rich as well.

The whole structure of how business is conducted — stratification of elite Catholics who are the only ones who have access and then do nothing with that access for fear of losing it — this whole stinking, revolting mess needs to be burned to the ground.

This is not how Our Blessed Lord designed His Church, it is not a country club with the deplorables hanging around the outside looking in.

The rich, the influencers, the suck-ups in the Catholic media, the folks who have made their parasitic living off the patrimony of the Church, all of these have contributed to Her destruction and demise.

Does Tim Busch ever stand up before a crowd of bishops and demand they publicly denounce Fr. James Martin's leading souls to Hell?

Does George Weigel ever speak at conferences and denounce the bishops' embrace of illegal immigration for which they receive billions of dollars from the federal government?

Does EWTN ever air programs asking why the bishops will move mountains about social justice Democratic Party issues but remain so soft-spoken about abortion and the Catholic politicos who support it?

On that point, if the bishops put one-tenth of the effort into the pro-life cause that they do into the illegal immigration effort, Roe would have toppled decades ago.

The bishops, as a body, are corrupt as hell, led by devils like Cupich, Wuerl, Farrell, etc., yet the Country Club Catholics simply do not want to face this reality squarely in the face.

They hate war, even when it's necessary, because, well, it's hard to fight with a martini in one hand and some delightful glazed shrimp appetizer in the other.

They must be terribly insecure within themselves to want the approval of such a wicked bunch of men, which makes you wonder: Which group of Catholics at the end of the day is really deplorable? 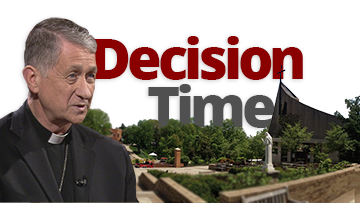