They need to wake up fast.

I'm Michael Voris, coming to you from the lobby of the conference center near Cleveland Ohio where this year's Bringing America Back to Life Conference was held this past weekend, brought to you by the Cleveland Right to Life.

As it looks increasingly likely that Biden will be the opponent of President Trump in the fall, a close examination of the existential threat facing the presidency of the most pro-life man ever to occupy the office is in order. We all know that Biden is — or rather, passes himself off as — Catholic, although with the exception of baptism, he's about as Catholic as Genghis Khan.

So the Catholic vote will be especially interesting and telling to keep track of throughout Campaign 2020. And that means measuring attitudes of the P.C. Catholic crowd, most of whom are cowards lacking any real conviction except for their own comfort. A little harsh, you say? Not at all, because the reality is far worse.

Centuries ago, heck even decades ago, Catholics were made of real stuff; they had guts and the men spoke like men. That is one of the appeals of Donald Trump to devout Catholics, meaning people who actually believe the Faith. He talks like an average Joe, and you never leave the room wondering what he meant by something. Indeed, even beyond Catholics, that is his appeal to nearly all of his supporters — his ticket of admission, so to speak, into the kitchen table discussion.

But since Church Militant is for Catholics specifically, we'll confine these comments to that audience and say, Catholics overall have become politically correct quislings, led around by the nose by a group of emasculated men in robes, many of whom are gay, and who have for decades now, sided with the P.C. crowd in the culture.

By condemning any speech that even remotely smacks of straight-up clarity, they have reduced any substantive discussion in the Catholic world to one of emotions and being nice and polite and all that garbage. They call it "tone," and if you don't have the appropriate "tone" — as decided by them — then you aren't allowed in the discussion.

Church Militant knows a thing or two about all this, just for the record. And of course, so does President Trump, blasted because of his "tone" — a criticism that plays right into the hands of his detractors, who are more concerned with his "tone" than the nation collapsing around them. Trump speaks plainly, period. And given the dominant P.C. culture, there needs to be a leader who stands up and calls you-know-what on all this.

The politically correct crowd has weaponized the very notion of civility and decorum to lull people, including various Catholics, into a sleepy haze of unawareness. They are the first to say, "Don't judge," but are actually the ones doing the judging by condemning good Catholics for judging. Of course, we are supposed to judge. God has given each of us the ability to judge, to discern and then direct our actions accordingly to the moral good.

But no — bishops, clergy and cowardly Catholics — who, for the record, all profit personally from going along with this — prefer to sit idly by and damn the president for his "tone," but feign some concern for the preborn.

The Marxists in the hierarchy have so polluted Catholics' thinking, that by pointing at a supposed "lack of charity" they are able to dispense with any discussion on the actual substance. Likewise, the "hate factor" the Left holds for Trump, completely fabricated so as to gin up great distaste for him, is really aimed at derailing him from getting pro-life judges on the court.

For the first time in living memory, there is an actual pro-life president in the White House and he is remaking the federal judiciary and most importantly, the U.S. Supreme Court. That very issue is what inspired that demonic response from Chuck Schumer last week in front of the court, actually threatening not one, but two U.S. justices by name. For the Left, it's always been about abortion. It's their high sacrament — the gateway to unbridled sex for elites and disguised genocide for minorities.

But, given the great divide over abortion in America, they have chosen to go after Trump in another manner, by painting him as "intolerant," a "racist," a "Russian," a "martian" — anything and everything they could throw at him. They whine on incessantly about his tweets, where he speaks pretty directly. Who cares if he destroys the notion of political correctness in his tweets and speeches? That Marxist tool should have long ago been dismantled, but it reigns supreme in the minds of the college educated, a disproportionate share of whom are Catholics.

Trump, in many ways, speaks like Church Militant and vice versa.

Man, because he is created by God in the Divine Image, has not just the capacity for truth, but actually is drawn to it. So Satan, through his offspring in the political, cultural and religious arenas, must suppress any discussion or presentation of truth, because he knows that when man hears it, it will echo within him and be recognized. So the language must be controlled, such as "pro-choice" instead of "pro-child killing." You'll hear "Love wins" instead of "perverted sex," "guns kill" instead of "people kill," and so forth.

Politicos do this all the time, the way they name legislation and frame debates. Think of the badly named notion "global warming." It had to be quickly dumped and renamed "climate change" once science said the temperatures were actually dropping, not increasing. But facts have never gotten in the way of the Left's agenda, and that includes, most dangerously, in the Church.

So, are there lots of Catholics who are somewhat devout but turned off by Trump's "style"? No doubt. But those people better wake up and realize the reason they see his style as off-putting is because they have been conditioned by a bunch of weak or homosexual bishops and priests who have hidden their filthy evil behind the word "charity." They use that as cover for corrupting the Faith and placing the souls of countless Catholics in eternal jeopardy.

They are the ones who are uncharitable in the highest order. They endanger the souls of everyone they come into contact with, with their departure from Tradition in the Church — claiming nearly everyone goes to Heaven, or we have a reasonable hope all are saved, or mortal sin is very difficult to commit, or there is no need to convert and on and on. They dress that evil up in a very nice "tone," but it remains evil nonetheless.

Trump, in many ways, speaks like Church Militant and vice versa. Straight-talk appeals to many people, even if P.C. weaklings are bothered by it. The simple reality is, sometimes you have to verbally belt someone across the face to get them to realize they are being duped and led astray. 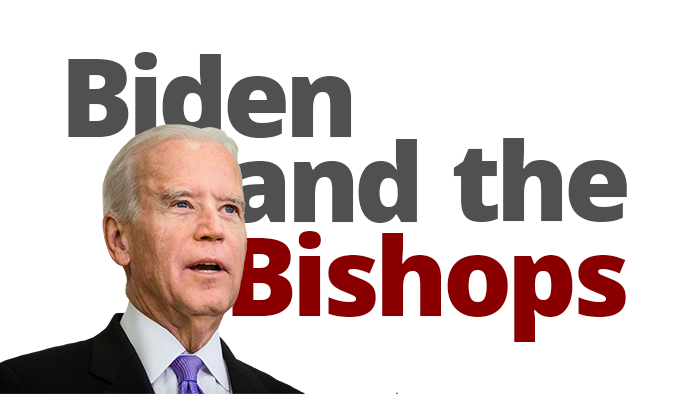 Biden and the Bishops
A match made in Hell.