And the only recourse against the Devil.

We've said it a few times here at Church Militant, and it keeps bearing out: Life happens where religion and politics intersect. Kind of funny, right? Remember the two things you are never supposed to talk about? Those are the two major driving forces of life — Church and State.

For many on the politically conservative side of the spectrum, they come to understand this truth: Separating God from the law is a recipe for disaster and the end of a civilization.

One of those people is Ali Alexander, the force behind the "Stop the Steal" effort, which spread like wildfire all over the country in the wake of the 2020 election. So much was Alexander influenced by the link between politics and religion that he's decided to convert to the Catholic faith.

Separating God from the law is a recipe for disaster and the end of a civilization.

Alexander was in the Church Militant studios recently and shared his thoughts on faith and politics as we talked in our chapel. Many faithful Catholics who also consider themselves to be patriots at the same time have been discouraged with the outcome of the vote, considering the election to be stolen.

Ali's been in the political war for 14 years, cutting his teeth early in his young life. But now, in his mid-30s, he says he's fully prepared for battle. The real impetus behind the Stop the Steal effort was not from 2020, but the 2018 midterms in Florida, where the cheating going on in Broward County became a major flashpoint.

His conversion to Catholicism could be a harbinger of many more coming to the Church (fresh from battle, blood on their swords and willing to die for the truth). Ali recognizes the need for total commitment to the cause, with no exceptions, and a willingness to pay whatever the price for Holy Mother Church and Our Blessed Lord — regardless of the particular battle.

At one point during the interview, Ali mentioned that it was the apparition and message of Our Lady of Fatima that kind of sealed the deal for him to come to the Church. I shared with him that was the exact same story regarding my own father, Russ Voris, who, as a member of the Nazarene Church, had first become acquainted with the Fatima apparitions a couple years after marrying my mother.

He too was brought to the Church, to Christ embodied, by Our Lord's Blessed Mother. Spiritual war is nothing if not a bloody, messy affair. The intensity level can sometimes be off the charts. For some, the constant barrage is terrifying. But for any who turn to the Catholic Church for solace as well as strength, it is given.

The entire reason the Church exists is to quicken souls, to enliven their intellects, to fortify their wills, flood them with grace and make them warriors against the demon so as to save their souls and the souls of as many others as they are able to bring along.

The raging political war, which is really a spiritual war, has one aim — the destruction of the Catholic Church, the only means of salvation that exists. Our true opponent is not Biden or Pelosi; it is not the entire communist front. It is Satan operating through them.

No political party or organization can lay a finger on the demon.

True, they must be fought tooth and nail in the arena of politics and culture, but never without an understanding that the real enemy is the demonic force behind them, and because that is the case, only the Catholic Church — instituted by God Himself — with the power of the sacraments can defeat the Dragon.

No political party or organization can lay a finger on the demon. Only the foot of the Woman of Genesis and Revelation can crush his head, because that is how the Divine Will ordained it, a truth that both Ali and my father came to know and embrace. "I will put hatred between you and the Woman, and she will crush your head."

Offer prayers of thanksgiving and support for Ali as he comes home to the fullness of the Faith. And if you'd like to see the interview in its entirety, just click on the provided link. 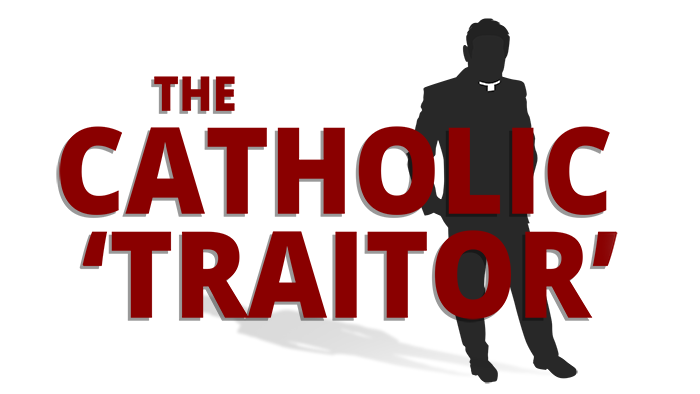 The Catholic ‘Traitor’
Treason against tyranny is the work of God.