As the coronavirus threatens to bring the world to a virtual standstill, we should step back for a moment and look at some interesting points of convergence. Three in particular stand out — their interrelationships: the Church, China and coronavirus.

Let's tackle China first — a nation whose leadership is bent on not just being the mythical number-one nation in the world — whatever that means — but world domination.

For years and years, China has been screwing over America predominantly and any other nation that wanted to work with them. It's been fools gold to believe that the largest human rights offender on the planet could also be, at the same time, a "good global business partner." That's ridiculous.

Biden has another funny deal going on. He's an actual supporter of China.

They murder people — outright kill them. They have what amounts to a concentration camp system in place for political or religious prisoners. They forcibly abort all children except the first one. China is an evil empire run by godless, bloodthirsty leaders — atheist Marxists.

The hammer and sickle speak for themselves. They are instruments meant for violence — to deny individuality and to demand submission to the state. The God-given dignity of the human being is completely ignored. Communism believes in so-called globalism, not just the kind the Hollywood patsies, vegans and environmental nut jobs do. Those crowds are just useful idiots for the Marxist crowd, which brings us to the Church. And in dealing with China, it's either the biggest patsy of them all, or in on the deal.

We know there are Freemasons up and down the Vatican, and Marxism is an excellent weapon for them to destroy the Church. It has been for over 100 years now.

So why would there be such a cozy relationship between this pontificate and the commies in China? And it is beyond cozy. It's downright alarming. Nearly every major bad actor on earth is involved in this triangle somehow.

Theodore McCarrick, who appears to have been a communist plant in the Church, set up the China-Vatican deal before being exposed as the twisted pervert he is. That deal has not only been denounced by Abp. Viganò, who blew the whistle on McCarrick and associated scum, but he is now in hiding for his life for having done so.

It's also been denounced by the very man who would know more about it than any other man alive — Cardinal Zen. Yet the Vatican continues to maintain all is good. China, in fact, is the role model of Catholic social justice in action.

Last year, Sam Brownback, the U.S. ambassador-at-large for international religious freedom, said "Since this provisional deal was announced last year, the Chinese government's abuse of members of the Catholic community has continued. We see no signs that will change in the near future." Brownback's work is done on behalf of the Trump administration, which of course has been trying to establish a level playing field with the Chinese communists.

So we have, in this corner, the commies in China, and absolutely remarkably, the Marxists in the Vatican, while in the other corner, we have the Trump administration and faithful Catholics. Ah, but don't forget, on top of all of it, we have the U.S. bishop-backed presumptive presidential nominee for the Party of Death, Joe Biden. Biden is a phony Catholic who has been celebrated by various bishops and given a complete pass for his heresy and sacrilege.

But, Biden has another funny deal going on. He's an actual supporter of China. In the 1990s, Biden was instrumental in obtaining for the Chinese commies the status of most-favored-nation during his term as senior Democrat on the Senate Foreign Relations Committee.

Biden was able to get the Senate to side-step and then vote down the tying of human rights violations to economic considerations, and American workers were thenceforth screwed. Likewise, when he played the role of giving Obama some credibility on foreign policy as Obama's vice president, China's situation only got better economically and the American worker suffered more.

When President Trump said last year it's time to go after China, there was Joe Biden with the insane claim that everything is cool with China.

And who can forget that while vice president, this abortion-loving, phony Catholic crafted a deal with the Chinese communists that enriched his son Hunter by a cool $1 billion. That's billion with a B.

But perhaps the best example of all of Biden's love of the Catholic-persecuting Chinese commies is his ridiculously stupid assertion that Trump's travel ban against coronavirus Chinese visitors coming to the United States — like they did in Italy — was based on race.

Even many average-Joe Democrats are finding that claim hard to swallow.

Coronavirus in the third cog in this very weird wheel.

Even many average-Joe Democrats are finding that claim hard to swallow.

Remember, the Wuhan virus originated in China — a fact they are now lying about through a massive propaganda assault in various organs of social media — actually blaming it on the U.S. Army in some kind of secret biowarfare operation.

And yes, for those of you connecting the dots or keeping score, it's the same virus that has caused bishops all over the world— including the United States and especially Rome — to shut down parishes and cease all Masses.

Perhaps all of this is just some big coincidence, but it does make for a very interesting constellation.

Many of the bishops' love for Biden; the non-stop, phony social justice garbage pouring out of the Vatican and the USCCB; the Vatican's newfound love for communist China at the expense of faithful Catholics actually in China; a virus originating in China; a nation that has a vested interest in seeing Trump lose in November; and the leading contender using the same Chinese virus as a weapon against Trump — the same contender that too many of the bishops support.

Something is seriously wrong here.

Too many stars are aligned — too many dots are just too easily connected: the Vatican, McCarrick, the Chinese accord, ranking U.S. prelates' admiration for Biden, the coronavirus now destabilizing markets — not to mention killing people all over the world, as well as bringing the sacrifice of the Mass to a virtual screeching halt — to an upcoming election where the Party of Death nominee is a China ally and cheerleader.

It's all just too weird.

There can be no doubt when the damage is this severe and the players this evil, that there are gigantic evil forces just off stage, just behind the curtain. There are just too many coincidences and relationships — way too many.

There are always massive forces just off stage, but when the sacrifice of the Mass is directly touched upon, we have moved to a different universe. 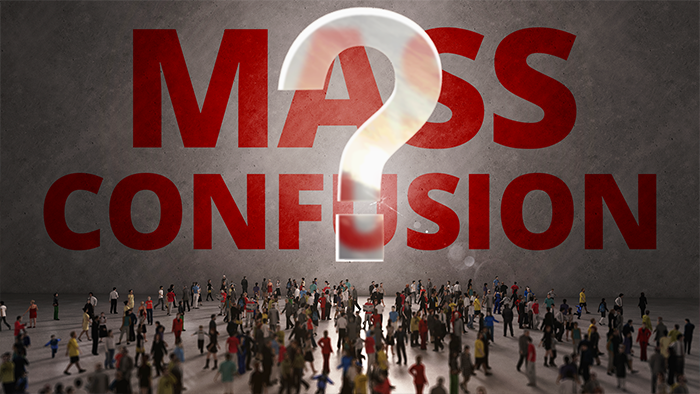