We here at Church Militant have been saying it for years and years — politics is downstream from culture. And, unless the culture starts producing men of virtue and nobility, the culture is dead — which means politics becomes a haunt for the diabolical, a means by which demons can do mop-up duty with the few remaining citizens who are good.

But there is a growing awareness of the reality of all this, especially among faithful Catholics who understand that, as a nation, we may be approaching the final battle for our existence and they need to step up. As you know, Church Militant has interviewed a good number of these folks from around the nation — as well as others who are not Catholic, but are men of goodwill who do understand the crisis we are in and just need some formation.

But there is little else more formidable than a solid Catholic who commits himself to the fight for souls, especially in the rough and tumble of politics. One such man in the fight is John Gibbs, a convert to Catholicism who enjoys the endorsement of President Trump in his campaign to become the U.S. representative for Michigan's 3rd congressional district, which encompasses the Grand Rapids area on the state's west side.

Gibbs is running against Peter Meijer, a RINO Republican who was one of the 10 House Republicans (like Liz Cheney and Adam Kinzinger) who voted to impeach Trump in January of 2021 — thus betraying the rank and file. Meijer got into office on Trump's coattails in 2020, even though the election was stolen from Trump himself.

The culture is dead, so politics has become a haunt for the diabolical.

All across the country — powered by the America first movement — Republicans swept into office. But some, like Meijer, quickly revealed their true colors and lack of fortitude, turning traitor and ignoring the peasantry. Meijer comes from the billionaire family that owns the Meijer supermarket chain in the Midwest, with more than 200 stores and $20 billion in sales.

He is the son of one of the co-CEOs, Hank, who, while he retired in 2017, is still on the board — along with his brother. Forbes Magazine has the brothers (Peter's dad and uncle) rated as the 95th most wealthy people in the world, with their accumulated wealth of $17 billion.

So Peter Meijer isn't exactly the poster boy for a "man of the people," which would explain why he is so out of touch with the rank and file of his own party. A little more mingling with the unwashed masses and a couple less hours at the country club might have served him well. What motivates Meijer is unknown, but it sure doesn't seem to be much other than staying in good with the anti-Trump establishment at GOP headquarters.

As of this Vortex, every Republican running for office who has received Trump's endorsement has won his or her primary. The old GOP is passing away — may, in fact, already be dead. This is Trump's party now, and the establishment is having apoplexy over that. They will, in fact, commit political suicide to prevent the rank and file from becoming the leaders.

The GOP has made money by wrapping itself in the American flag.

Gibbs went to Stanford for his undergraduate degree and earned his post-graduate degree from Harvard. He worked in the Trump administration as assistant secretary to Ben Carson at the Department of Housing and Urban Development, where he earned high praise from Carson. And, most of all, he is the very type of man that the GOP establishment is terrified of.

Gibbs is motivated by his love of God, which animates his entire worldview. The GOP establishment is motivated by its love of itself. Gibbs converted to Catholicism last year and regularly attends Latin Mass at a diocesan parish in Grand Rapids. It's from his faith that his worldview, including politics, flows.

While the GOP establishment has made much money and hay wrapping itself in the American flag and holding up a cross, it hasn't translated into very much in terms of action. Gibbs means to put an end to that and believes the silent majority of rank-and-file Republicans see things the same way. Gibbs, as we said earlier, is among a growing number of Republican candidates who are spelling the end of the way business used to be done in the Grand Old Party.

His narrative, his story, is not unlike many other stories of candidates arising from the ashes of a decaying culture, intent on resurrecting good and morality and virtue. So far, with his endorsements, Trump's record has been perfect, and many here in Michigan have their eyes fixed on this race — a sitting RINO vs. a Trump-endorsed new breed of Republican.

To watch the entire interview, which we highly recommend, please click on the provided link. Michigan's primary is Aug. 2nd. 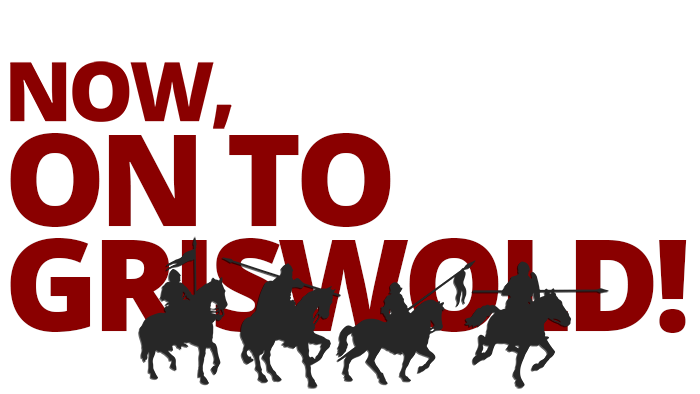 Now, On to Griswold!
That's the real problem.