Just a little nip and tuck — that's all.

It takes an enormous effort to try and change a Church that is two thousand years old. It's comparable to turning around an aircraft carrier. It takes some time, but once the course is changed and there's a full head of steam, the sheer momentum is practically impossible to stop.

This lot — useful idiots for the modernists — see themselves as just updating things in the Church to make her more relevant and relatable.

So a little nip here, a little tuck there and voila: same Church, different look and feel. Except, it's not the same Church. And that's what the anti-traditionalist crowd fails to understand and why they are such helpful tools of the modernist crowd. When you change the appearance of something, you change much more than the appearance. You change the perception in people's minds. In fact, that is the entire point of changing an appearance.

Take for example the patient who "goes under the knife" to supposedly look better, although it doesn't always work out that way. The person wants to present a different face to the world — literally. They want people to see them differently. That is the consciously intended effect.

All the millions of little "cosmetic" changes that have been introduced into the Church these last fifty years have served nothing but to make Catholic understand themselves completely apart from what authentic Catholicism really is. These changes absolutely matter because they have gotten down into the DNA of the faithful and resulted in them leaving the Church.

Holy Communion in the hand doesn't seem that big of a deal. You're still getting the Eucharist, right? What’s the big deal? Holding hands during the Our Father and swarming all over the Church to give the "sign of peace"? Nothing to see here folks.

Take for example this picture of Bp. Robert Barron standing proudly after Mass with his whole troop of girl altar boys. Not a big deal, you say? But, it is a big deal.

This image completely destroys the notion of the importance of the masculine in the sanctuary and that has been one of the leading problems in the Church the past fifty years — the downplaying of the masculine and the advancing of the emasculated.

Consider this, the sanctuary — the part of the Church that used to be set off by the Communion rail — is the womb of the Church. It is where Christ is, in a certain sense, conceived on the altar, brought down from Heaven and made real — incarnated.

This is in fact why the sanctuary is referred to as a sanctuary because the Holy becomes tangible and visible, physical and real in this womb.

Now, there is — or at least was — much symbolism in every action and location of the Church. That is before the modernist crowd moved in and changed everything and then enlisted the help of the anti-traditionalists, thousands of men like Bp. Barron, for example.

The symbolism, which speaks to the reality, of having only men in the sanctuary is that it is only men who enter the womb and through their presence initiate life. But when the sanctuary is overflowing with women, that sort of thought is impossible. It changes the sanctuary from a place of life to a place of worldly "equality" where women are just as good as men. Which is all fine and good, except the sanctuary is not a place for worldly concerns to state their case, through word or symbol.

It is the place of the holy, the word sanctuary has as its root, "sanct" — holy.

Now does Bishop Barron — or thousands of other clerics who are just fine with all this — do they all have the conscious thought on their minds to let me destroy the notion of the masculine and feminine and how that plays out in the presentation of the liturgy? Probably not. But some of them do. Those are the ones who made this "seemingly" visible change, but it's not just a visible change.

It speaks right on the issue of what is happening on the altar. in the sanctuary. You will notice in many older churches, there is a baldacchino over the altar. The most famous and recognizable one is in St. Peter's Basilica. It is essentially a canopy — as in the canopy over a bed, like a four post bed canopy.

Why is that there? Why are baldacchinos hanging over so many Catholic altars? Because it represents the location where Christ comes to love his Spouse, the Church, and bring forth the fruit of that supreme union of love — you and me — the sons and daughters of the Church, born from his marital embrace of his bride, the Church.

All of this reality is bound up and expressed in the symbolism of the male-only sanctuary, the architecture reflective of an actual marital bed. The greatest treasure of the Church, the Holy Eucharist, the Blessed Sacrament, the sacrifice of the Mass is all expressed and made visible through signs and symbols. This is why a little tweak here and a little nip and tuck there is so destructive.

When you change the appearance, you change not just the look, but the self-understanding. How many Catholics have any conception of the Real Presence these days? How many have any idea why the sanctuary would be visibly demarcated and only entered into in the liturgy by males?

To promote the idea of "nice" by showing how fun and sweet it is to have girl altar boys — and let's pose for pictures with them — is not serving the greater good of the Church.

There is no theology supportive of girl altar boys or women in the sanctuary, for that matter. Those are cosmetic changes initiated first by those who sought to destroy your faith by first destroying the way it looked. Then they enlisted the help of thousands of naive clergy who don't understand the significance of every movement, breath, image and subtlety of the liturgy, because they were poorly formed in seminaries which were controlled by the destroyers.

This is how you change a Church — the Catholic Church — by destroying its understanding of itself, of the necessity of masculinity, and replacing it with a silly cutesy heavily feminine presence that over time completely perverts the significance of the reality and turns it into something completely different.

Looks do matter. That's why the destroyers went after them with abandon. Change the appearance and you change the perception. That's the point. 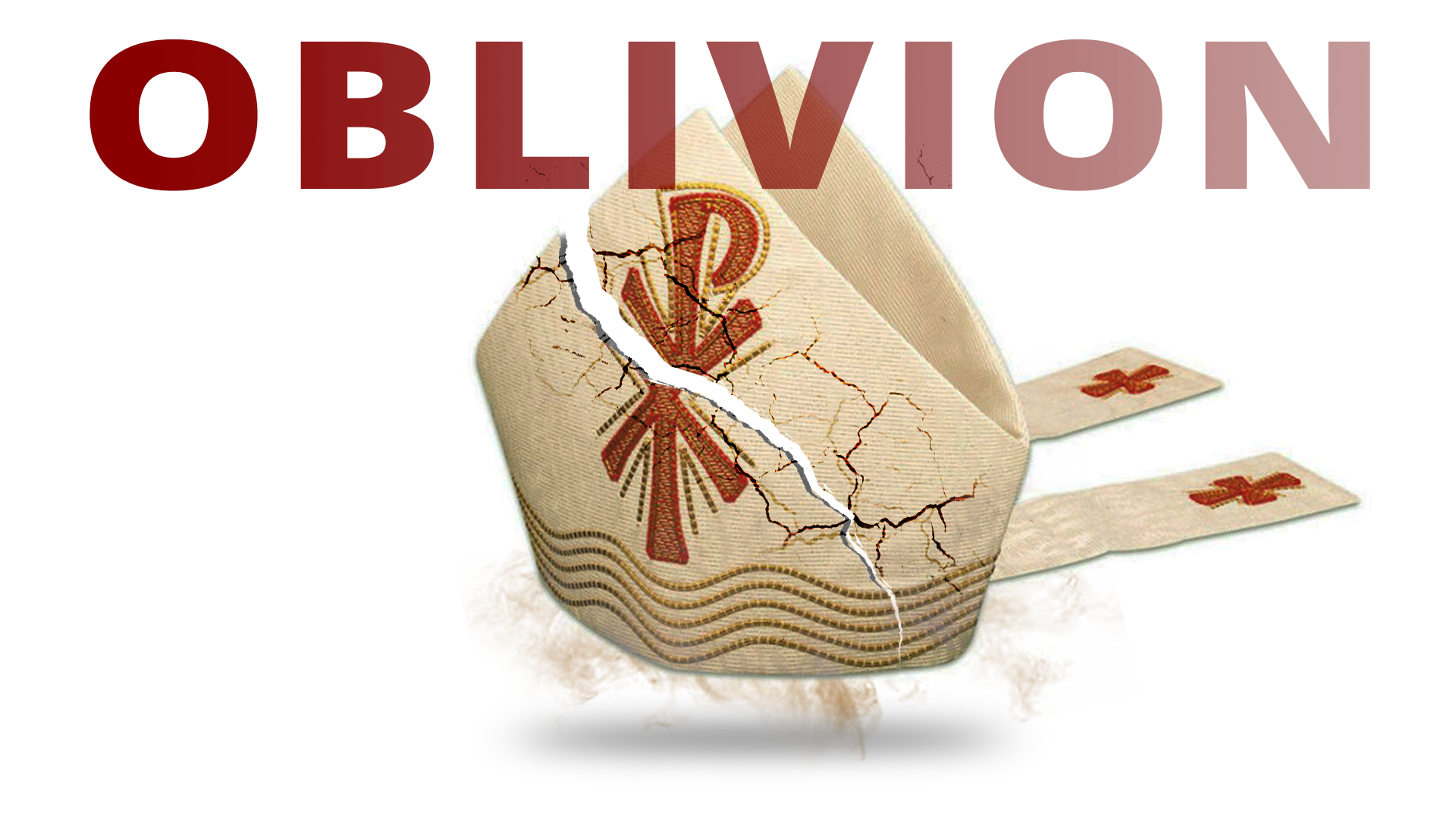 Oblivion
It's approaching, more quickly than most realize.