The most devastating impact that faithless and cowardly bishops have is the destruction of other souls. For the record, that's precisely why Satan goes after them — because of the widespread consequences achieved from pulling down just one. When he gets this many in his clutches, it's essentially lights out. Not only do they go to Hell, but they take countless others with them. It's precisely why at the Last Supper the infernal dragon demanded of Our Lord that He hand over the Apostles so he could sift them like wheat.

Unassisted by supernatural virtue, it can often be hard to stay the course and survive the nonstop battering of the Culture of Death.

In our Church Militant travels, we come across loads of people who possess what's called "natural virtue" and "goodwill." These are necessary attributes to come to the fullness of the truth. Alone, they are insufficient to plumb the depths of divinely revealed truth, but they are the first step.

While goodwill and adherence to natural virtue are not as common in today's world as we would like them to be, there isn't exactly a shortage of them. There is certainly enough to begin to work with to help bring people to the fullness of truth. You find this in the politically conservative world, especially with young people, who in their gut or in their intuition just know abortion is evil, same-sex so-called marriage is not right and broken homes are not the way things should be.

There is an earthly truth to these things — that which can be arrived at by natural reason — like the existence of God. But (and this is where things start to break down) unassisted by supernatural virtue, it can often be hard to stay the course and survive the nonstop battering of the Culture of Death. Compromise sets in: a small willingness here and there to sacrifice part of the truth to achieve what is, on its own, a good goal — like the ending of abortion, for example.

But truth can never be compromised, not even for a good end, not at the cost of the truth. So what happens in a world of corrupt and cowardly bishops is this: Men of natural virtue and goodwill — the building blocks — are left with no guidance and start compromising, sacrificing truth for a noble political end. They'll ignore the supernatural truth because they have never been informed of it. It's not even clear that they are aware of its existence, and if they are, they are largely unequipped to plug into it.

So they are left to the tumultuousness and vicissitudes of their own personal feeling about truth — a good instinct, but little else than an instinct. These young conservatives are legion, and, regarding supernatural truth, they are largely leaderless. Thank you very much, U.S. hierarchy.

These young conservatives are legion, and, regarding supernatural truth, they are largely leaderless.

There are various notables of this movement — men like Jordan Peterson and Charlie Kirk — who have zillions of young men who follow their every utterance. Some of them are actually open to Catholicism, again sensing "in their gut" something there is right and noble. One of them is Turning Point USA's Charlie Kirk.

We sat down with Charlie at Cleveland Right to Life's "Bringing America Back to Life" conference this past weekend and asked him about his views on, not just the state of the culture, but what he knew regarding how we got here — like the evil of contraception.

We invite you to watch the entire interview by clicking on the link below, and pray for these notables like Charlie; they are on the verge, the brink, of following wherever the truth leads them. That's what we mean by goodwill. They just need someone to lead them there.

And, for the record, Charlie, like we chatted briefly after the interview, Church Militant is more than happy to make ourselves available. Like these wicked bishops who have rejected their high calling, you have the opportunity to bring souls to God, not just achieve a political end. 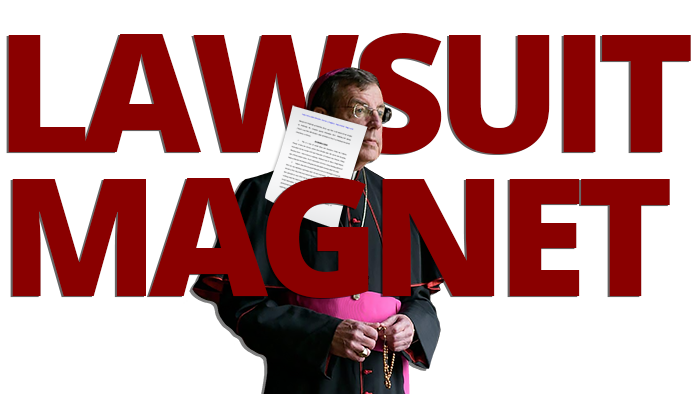 Lawsuit Magnet
What's good for the goose, after all.