For years, Church Militant has been telling you how intimately connected the Church is with the world of politics. The convergence of the two is sometimes uncanny, just like Biden and his cheerleaders, the bishops. And every now and then, a scene emerges, a photo that captures all of it in a moment frozen in time.

One, of course, is the photo of phony Catholic Biden yucking it up with communist Cdl. McCarrick and his episcopal pals. Little did anyone realize when that photo was snapped just how intimate the bond between these men was. So close were the two, in fact, that McCarrick was even at the funeral of Biden's son in June 2015.

What has united Biden and McCarrick over the years, however, has been China. Each man has vigorously promoted China, with Biden getting it a "most favored nation" status during his time in the U.S. Senate and McCarrick getting China's horrific crimes against humanity, especially Christian humans, completely ignored.

But as we think on all this and reflect deeper, always remember that the current U.S. hierarchy is largely a result of McCarrick's scheming. While Joseph Bernardin was also a major factor, it was McCarrick who has really shaped the American episcopate, thanks to the much greater number of years he had to work his evil.

What has united Biden and McCarrick over the years, however, has been China.

Bernardin has been dead since the mid-'90s. McCarrick went on for 22 years more, continuing to populate the ranks of the bishops with wicked, traitorous men, including Tobin of Newark and Cupich in Chicago.

Never forget the lineage that McCarrick has created. He may be out of the picture now, but his very long shadow still dominates the conference of U.S. bishops — the same bishops who collectively created Joe Biden. And yes, make no mistake, Joe Biden is the U.S. bishops' Frankenstein monster, cobbled together from scraps and symbols of the Faith, such as a Rosary on his wrist and constant babbling about his deeply held private faith — all while receiving sacrilegious Holy Communions and officiating at homosexual relationships passed off as "marriage."

When Biden named Marxist homosexual and baptized Catholic Pete Buttigieg to his cabinet, there was not a peep from the bishops. While the media world celebrated, the bishops said not a thing about naming a sexual deviant to the cabinet. However, they would say something against Trump with every opportunity that came up to do so. But Biden comes in as an unelected president in favor of child killing as well as sodomy and gets a pass from them.

But there is another moment frozen in time that underscores all this, a picture so iconic that its callousness could only be met by the bishops. When the bodies of the dead U.S. servicemen from Afghanistan were brought back to Dover Air Force Base, Biden kept checking his watch. At first, the Marxist media covered for him. "Lies!" they yelled across their social media platforms. "More alt-right conspiracy theories from racists and White supremacists." And on and on.

But when the actual video of Biden checking his watch multiple times came out — coupled with the firsthand eyewitness testimony of the family members there to receive the remains of their children in uniforms, whose blood is on Biden's hands — the lying media members were forced to backtrack. But in true fashion, they only backtracked the least amount they could. Their Soviet-style "fact-checkers" went into overdrive and did not recant their original stories. They merely updated them to say, "We can't be certain that he didn't check his watch. It's unclear."

No, it's not "unclear." It's on video. There are eyewitnesses, just like with regard to a rigged election that put this communist killer into office.

Well, let's now pivot to the bishops and apply this same template to them, which fits so perfectly:

But in the face of all those facts — fact-checked facts — the bishops continue to deny reality as the bodies and souls of millions are carried right past them, bodies and souls whose blood and eternal destinies are on their heads and hands.

It's uncanny how much crossover there is between the crooked politician and the corrupt hierarchy.

As we said, it's uncanny how much crossover there is between the crooked politician and the corrupt hierarchy. Both need to be blown up by the light of constant exposure. There will come a tipping point when enough people come to realize this evil. It is then that things will begin to change.

No, we are not there yet, but the boulder is being pushed up the mountain. It's sometimes slow, but it took these monsters decades to accomplish their evil. Don't think it won't take just as long — and likely longer — to reverse it.

One of these days, while the bishops are checking their watches, they're going to come to realize that time's up. You need to ensure that you are on the correct side of history when the alarm goes off. 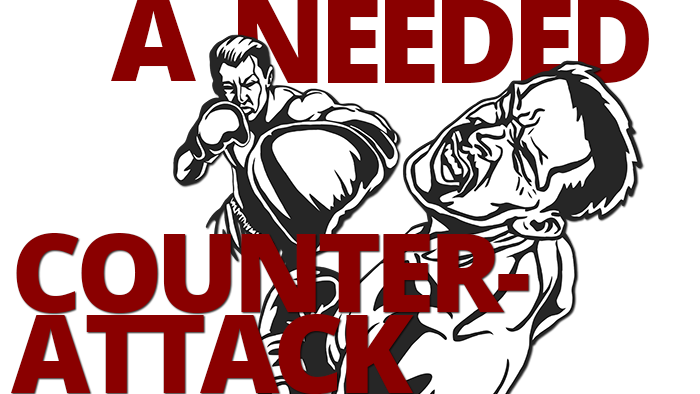 A Needed Counterattack
Because it's time!