My father — God rest his soul — used to say to me that you can tell the quality of a man by who is on his enemies list when he dies.

Anyone who dies without enemies led a purposeless life, totally selfish, concentrating all their effort at never committing to anything sufficiently to earn them enemies — gliding through life concerned about nothing more than human respect.

But all of this goes much further than that. It's not just getting enemies that matter, but that you acquire the correct enemies. And we recall, Our Blessed Lord had an extensive list of correct enemies — they crucified Him.

If you don't have enemies owing to your faith and zeal and love of Our Lord, then you don’t have enough faith, zeal or love. In our go-along, never-give-offense-type culture, the most detestable thing in the judgment of men is to give offense — wrong. The most detestable, un-manly thing you can do is to never give offense.

Be careful when the whole world celebrates you. It's a mark of impending doom and probable damnation. You have not loved Our Blessed Lord sufficient to warrant any enemies.

As usual, no specific example of anything was given to support his spurious claim, just the usual episcopal claptrap by those in mitres who don't like their nefarious deeds being talked about publicly.

McElroy is a disgrace to his office, but then again, since he was promoted into that office because of the machinations of Mr. Theodore McCarrick, that can't come as a surprise.

McElroy has lied about the Faith, deceived the souls entrusted to him and has been part of the entire "revolution" inside the Church. That's why the commie McCarrick boosted him up the ladder.

So here we have the case of a bishop and layman each saying the other is lying. We give specifics; he blurts out emotional nonsense. But the dividing point is the issue of truth. Truth is what creates enemies — those who accept it and those who reject it become enemies.

That's why the man with no enemies has never been a lover of truth. Likewise, it's why you want to make sure that your enemies are the "correct" enemies, the ones who hate the truth.

No one, absolutely no one, attains salvation without being a lover of truth, and it is impossible to pass through this life loving the truth and not accumulate a string of enemies.

Given the cultural mindset, this needs emphasizing because people not liking you, or you being perceived as someone who gives offense, is deemed by many the most egregious thing on the planet.

It isn't. You aren't trying to give offense. You aren’t consciously going around trying to create and increase your enemies list.

If you are being a faithful Catholic, you won't need to do any of that — it will all happen naturally, all on its own.

A necessary ingredient to salvation is an extensive list of enemies, with all the correct names on it. 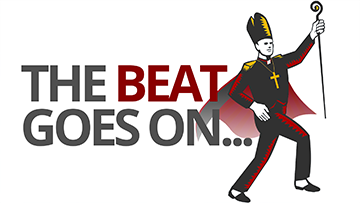 The Beat Goes On ...
And it seems only God Himself can stop them.