Hello everyone: I have in my hand, at long last, the signed contract that allows our Baltimore prayer rally to proceed. The City has now been forbidden — again — from any further interference, as well as the venue, which has also been operating in bad faith.

After months of legal scheming and maneuvering by the city and the venue, the United States Fourth Circuit Court of Appeals, in a unanimous decision, dealt a devastating blow to the city, shooting down their attempt to prevent our Bishops: Enough Is Enough prayer rally and conference on Tuesday, Nov. 16, right next door to the corrupt United States Conference of Catholic Bishops.

The district court, in September, ruled that the city unconstitutionally discriminated against us, violating our First Amendment right to free speech. The city then ran screaming and crying to the Fourth U.S. Circuit Court in Richmond to get that ruling overturned, and got absolutely destroyed.

In the last four months, over a thousand pages of briefs and motions have been filed. Normally, that would mean a ruling would take months to be handed down; in this case, the judges ruled in just eight hours, so insane and poorly reasoned were the city's arguments.

Recall that this all began back in August when city solicitor Jim Shea, who funnels millions of dollars to the corrupt sex abuse cover-up archbishop William Lori, pulled the rug out from under the rally, accusing us of being violent and having ties to the events of Jan. 6.

A monumental win has been handed to Church Militant.

Now, the Fourth U.S. Circuit Court has blown all that up and cleared the way for the rally to move forward. So here is where we are: A monumental win has been handed to Church Militant — precedent-setting. So we need to respond in kind, with a monumental turnout at this rally.

We get that numerous people had to cancel plans because of all the uncertainty around this owing to the city and bishops' collusion. However, we now have the green light to proceed, so let's do it.

A massive presence by peaceful-but-noisy (very noisy) faithful Catholics will send a double message — to the corrupt bishops' conference and to the government forces trying to cancel our First Amendment rights.

So please, sign up to reserve your seat right now, by clicking on the link below.

With your prayers, support and love for the Church and Constitution, we did it! Now let's make the statement that needs to be made by showing up in force, Rosaries in hand and voices ready to be heard.

God love you all, and we'll see you in Baltimore — the first diocese established in the United States. Seems fitting to be the place where we begin the clean-up of all this sickening corruption. 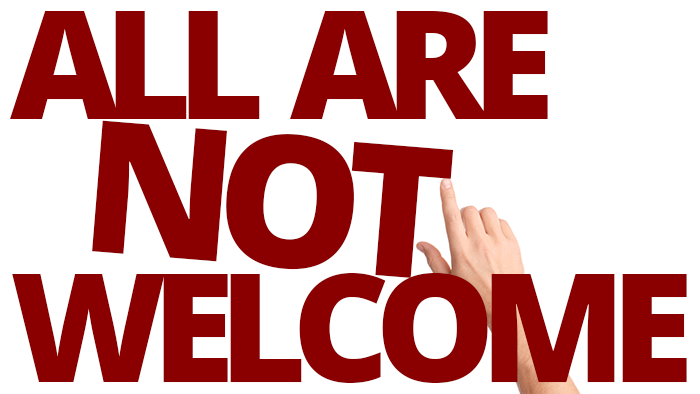 All Are Not Welcome
Especially politically conservative Catholics.