As we approach the most significant, landscape-altering election probably in U.S. history, the Catholic bishops have a word of advice for us all: Keep it civil.

Parishes all over the country have begun initiating the latest limp-wristed plan of the nation's bishops: Keep your discourse civil.

First, that's a little rich from the lying, cover-up mitered crowd who, while keeping it "civil," ordained thousands of men who raped your sons, stole your money and perverted doctrine. But hey, at least it was all "civil" — socially polite, lots of chuckles and guffaws and back-patting and martinis.

Civility, it would appear, is in the eye of the beholder. Near the end of last year, in anticipation of the 2020 election, the U.S. bishops launched this, literally called "Civilize It: Dignity Beyond the Debate." Those who no longer trust the body of bishops see this as just one more move to try and shape the Catholic vote by quieting down the rabble-rousers.

Be sure of this: Whenever evil people start calling for civility and calm, they are losing the public trust, and they know it.

The program is built around three principles: civility, clarity and compassion. Sounds impressive, until you realize this is nothing more than just the latest warmed-over version of everything the lying, cheating, gay and cover-up bishops have used as a weapon for decades to screw over the faithful.

Being socially polite is not a recipe for fighting evil. No one is saying go out and personally insult someone, but to remain a passive milquetoast who just sits there in the corner being polite and soft-spoken — please!

The evil monsters who now have control of every institution of the culture did not gain control by being polite and socially courteous. The abolitionists were not socially polite; neither for that fact was the civil rights movement. They weren't violent, true, but they certainly weren't "polite." They each opposed and upended every cultural maxim of their day. That's what social movements do. In fact, it's the only way social change for the good is brought about.

Existing cultural mores, which in these days are virtually all bad, must be openly challenged. That is going to set lots of people's teeth on edge. And it will start the name-calling and slandering and everything else, and in some cases, a violent response. You don't respond with violence, but you don't fold to it either.

Under the "clarity section" it says I will be "listening and seeking to understand others' experiences." Let's be real for a moment here. No, I won't. I have absolutely zero desire to listen to and understand the experience of a murderous gang of Hollywood elites who receive awards and brag about how they killed their children to get the award and are applauded like mad for doing so.

Civility, Your Excellencies, is for those who are civilized, and frankly, your collective actions disqualify you.

Maybe in some quiet corner, someday, away from the crowd, maybe. But in the throes of a throwdown like the 2020 election, no!

You literally murdered your child so you could receive a golden idol, and you said so. There, I listened. I understood your experience. Check! You are a twisted child murderer who — and this is the point of all this — wants to make others believe that what you did is admirable and encourage them to do the same.

This is what is wrong-headed, and frankly, pansy about this initiative by a bunch of sissified, weak men hiding behind their robes. They can't face head-on — can't even come to terms with — the concept of actual evil, much less confront it, tackle it and defeat it. Perhaps it's because so many of them have allied themselves with evil in their personal lives and their episcopates.

How dare these panty-waists and wicked men preach to Catholic voters how to be "civil."

Exactly how do you civilly shred thousands of documents that would prove your guilt and complicity in destroying the lives of tens of thousands of mostly teenage boys whom your clerical buddies raped?

The filth you have collectively foisted on the sheep will be your everlasting shame, and even in the face of your thefts of billions, your emptying of parishes — not to mention souls and bodies — you still persist in your wanton destruction of the Faith and of truth.

Please instruct us, Your Excellencies, how any of this is "civil"? Perhaps we could gather for a cup of tea and a few biscuit cookies so you could instruct us — sipping pinkie extended, of course — so we could be all dainty and socially polite and "civil."

Civility, Your Excellencies, is for those who are civilized, and frankly, your collective actions disqualify you from that designation. You have no right whatsoever, given your evil and filth, to lecture anyone about being civil. It's revolting and angering to hear. Elites who have been in control for years using the conventions and politeness of a civilized society start to get very upset when their cover is blown and they are unmasked for the horrible people they really are.

The leaders are a bunch of weak, emasculated, vengeful old queens with boyfriends or a past (or both) who, when losing their grip, appeal to 'civility.'

People go where their leaders go, and the leaders, by and large, are a bunch of weak, emasculated, vengeful old queens with boyfriends or a past (or both) who, when losing their grip, appeal to "civility" in the upcoming election.

Hell, most of you won't even publicly denounce the horror of the most uncivil act that could ever be perpetrated: the murder of children in the womb by the tens of millions. You don't give a rip about it, regardless of your rare comments to the contrary.

Judas, who is the spiritual father to the largest bunch of you, also began as a thief. You have stolen billions from the faithful, the latest example being the Peter's Pence fund, advertising it as money for the poor, when the money is being used to pay off the Vatican's annual budget shortfalls. (While that's allowed, it's how it's touted. It's presented as 90% to the poor and some to Vatican administrative overhead, as opposed to nearly all to plug budget holes and some leftover pennies to the poor.)

By the way, do the bishops get a cut of the money? We don't know. They never say and, of course, it's impolite and uncivil to ask such gauche questions. But the old queen crowd will try to sound all polite and relevant by asking for civility and clarity and compassion.

What they will never talk about, however, is truth. They prefer to bury truth under a cloak of social politeness and wonderful cocktail mixers. They steal, lie, cheat, kill and cover for one another on a scale that would make mafia hit men blush. As various federal and state law enforcement officials have told us, they have no conscience.

But Church Militant and others who are sick of this tyranny, we are the "uncivil" ones because we speak plainly and clearly and compassionately. See, we don't want you to go to Hell, but you are certainly on that path and we want you to turn around. There. Is that civil, clear and compassionate enough?

You wonder where John the Baptist would have fallen on their civility scale. 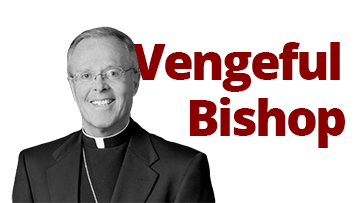 Vengeful Bishop
And he's not the only one.