Is RICO around the corner?

May 17, 2019  0
Podcast Available for Premium Subscribers

Last summer, in the wake of the shocking Pennsylvania grand jury report, Church Militant predicted that a wave of state attorneys general investigations would begin and that it would reach a large enough scale that the U.S. Justice Department would be looking at RICO charges against the Church nationally, treating it as an organized crime syndicate.

We felt and still feel confident in all this for the simple reason that sources we have in Rome told us back then that the number one fear the Vatican had was the launching of a RICO investigation because that would inevitably lead back to the Vatican, which is proving more and more to be cover-up headquarters.

A number of things have transpired in just the last few days that are making this more and more of a reality.

First, it became apparent last week, with Pope Francis' document saying essentially that the laity will not be allowed to have anything to do with the clean-up of the Church and that the bishops would investigate themselves, that Rome is not serious about anything other than business as usual.

Second, in what is becoming commonplace these days, yet another raid by law enforcement was conducted as a search warrant is served, this one on the diocese of Dallas as officials said the diocese was not cooperating with turning over all necessary documents as part of a statewide investigation into the cover-up.

You can look for many more such raids around the country in the coming weeks because when bishops are not dealing satisfactorily to the minds of the courts, battering rams and search warrants are always an option.

Third, noted sex abuse attorney Jeff Anderson has filed suit in federal court against the Vatican asking the U.S. government to invoke the 1976 Foreign Sovereign Immunities Act, which, in short, means that Washington would ask Rome to turn over boatloads of information that the Vatican has so far not provided about sex abuse cases and the resulting cover-up.

It's highly doubtful that even if Anderson were to prevail and then Washington would prevail upon Rome to hand over what would likely be tens of thousands of pages and files, that the Vatican would comply.

However, Rome's refusal would certainly put a strain on relations, and that would be one more piece in the puzzle demonstrating that the Church has no concern about this evil.

There was one point in Anderson's filings that Church Militant actually brought out last November at the bishops' annual meeting.

Recall that at the very start of the meeting — literally the very start, as the bishops were gathered to address this very topic — a letter arrived from Pope Francis ordering them to stop all discussion and any voting and wait until he convened the sex summit in Rome in February.

Church Militant said back then that that move would add to calls for a RICO investigation because it would demonstrate that the U.S. bishops as a body are taking orders from Rome in this whole cover-up mess.

That is the very definition of an organized crime syndicate, that the criminal activity crosses state and, in this case, international borders as well and is being orchestrated, organized from one central location — a syndicate.

As we said, we pointed that out last November, and lo and behold, that very point is highlighted in Anderson's filing asking Washington to intervene with the Vatican.

This whole house of cards, all brought about by homosexual men who were ordained as priests and consecrated as bishops for decades, is about to come tumbling down. The feds and the states continue to close in.

And still, to this very day, the dominant leaders in the Church in the United States continue to maintain it has nothing to do with homosexuality.

The case that Anderson filed involved five males who were sexually assaulted by homopredator clergy.

There are none so blind as those who will not see. 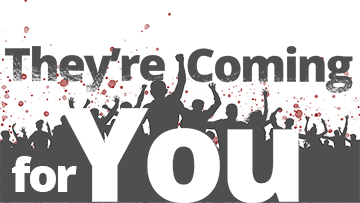 They’re Coming for You
And they won't stop until one of us has won.