The continuing sad story of the diocese of Buffalo's Christ the King Seminary is finally coming to an end.

The long-overdue shut-down of the homosexual hotbed was finally announced earlier this week by stand-in Bp. Edward Scharfenberger, who did, somewhat admirably, try his best to put a smattering of lipstick on that gay pig.

But no matter how dressed up in niceties it may be, the underlying truth is that a betrayal of the Faith by homosexual activists hiding in the priesthood is what caused this closure. A little history here is in order.

Back in 1982 when Joseph Bernardin became archbishop of Chicago, and eventually cardinal, he went about setting up a so-called house of formation for South American seminarians being funneled into American dioceses. The name of the facility was Casa Jesus and was, in reality, a house for homosexual seminarians being cultivated for eventual placement in dioceses around the country.

Shortly after that, Theodore McCarrick joined in the party and started importing gay South American seminarians for his diocese of Metuchen as well as other dioceses.

As an aside, what these men did fits the definition of human sex trafficking because these men were brought across international borders specifically for sex.

Only when the information became public did bishops respond, and only then, more out of damage control.

All of this came out in a story Church Militant broke in the wake of the Summer of Shame and revelations about McCarrick.

But back to the main story, when Henry Mansell became bishop of Buffalo in 1995, he too — taking his cue from Bernardin and McCarrick — converted his Christ the King Seminary into a destination for gay South Americans. The eventual rector, Msgr. Joseph Gatto made regular "recruiting" trips to South America — especially Columbia — to bring gay men back to Buffalo's seminary.

This went on for years — confirmed by Church Militant, which spoke to multiple former seminarians who even provided documentation to us from Gatto to superiors, listing various men who our seminarian sources indicated as being gay. This was all begun under Mansell and continued after he left for Hartford, Connecticut. Auxiliary bishop Edward Grosz was implicated in all of this as well.

The homosexualization of the seminary eventually caught up with the diocese of Buffalo culminating now in its closing, scheduled for the end of this academic year.

Buffalo is a focal point of the gayification of the Church in the United States and all its associated damage to the Faith and souls, not to mention bank accounts. Buffalo is seriously contemplating filing bankruptcy, increasing the number of such dioceses to 20 — more than 10% of all the dioceses in the country. As a reminder of just how pandemic this is, here is a list of them in order of when they filed:

Eventually, only through investigative reporting by independent Catholic media, all of this was exposed.

When media reports exposed the evil at Casa Jesus, Cupich shut it down. When media reported the rot in various East Coast dioceses, Holy Apostles Seminary confirmed that it was unwittingly being used by various bishops like Henry Mansell as a dumping ground for gay South Americans. And other reports confirmed the filth of Christ the King in Buffalo.

Church Militant was the first to break every one of these stories; others eventually followed suit. And this is crucial — only when the information became public did bishops respond, and only then, more out of damage control than a willingness to clean it up.

Yet even now, to this very day, bishops all over America continue to deny that homosexuality has anything to do with the ongoing meltdown of the Church.

Bishops like Robert Barron published a wonderful piece of deflection called Letters to a Suffering Church, which talks about all kinds of high-minded things, but deftly and deliberately avoids any mention of homosexuality among clergy as a serious cause. Cupich and Tobin likewise continue coddling heretic-minded clergy like pro-gay cheerleader James Martin. John Stowe of Lexington Kentucky embraces every aspect of homosexuality you can imagine. And the list goes on and on.

In the meantime, faithful Catholics are being beaten down, called names, isolated and so forth. Faithful priests who dare speak against the evil get shipped off to St. Luke's. And seminaries empty out and get shut down — all brought to you by the homosexual collective — the hive — what Abp. Viganò correctly labeled the "corrupt gay mafia" running the Church.

But heck, as gay cover-up artist and skilled liar Donald Wuerl comforted us, thank God it's "not a massive, massive crisis." 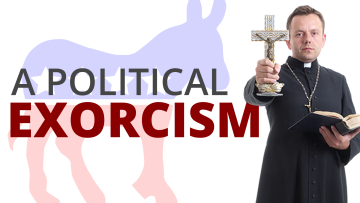