In the past few days, the retired former archbishop of Philadelphia (and before that, Denver) Charles Chaput stood in front of an audience and decried Joe Biden on abortion and being able to receive Holy Communion and so forth. Normally, actions and statements like those would be worth applauding and, certainly, the pure and simple message is.

However, as usual when a member of the U.S. hierarchy speaks, there is always the "grain of salt" factor you have to consider. Numerous well-known "orthodox" clergy seem to all of a sudden be so terribly concerned with the state of affairs in the Church that has bled over predictably to the state of affairs in the world, culture and government. It's almost like they have no idea that their reigns as bishops in key times and places around the country actually helped set the stage for this meltdown we are all now falling victim to.

Since Chaput put himself out there with his recent remarks, let's do a brief review of him and his past actions as a good example. When he was in Philadelphia, he hosted the World Meeting of Families. Nothing extraordinary about that until (because there is always an "until" with these "orthodox" ones), he invited two of the most Culture of Death politicos you could imagine — you know, the anti-family guys — to be honorary chairmen of the World Meeting of Families.

One was Pennsylvania governor Tom Wolf, the lowest form of political life possible, because he was the only governor in American history who was also a "death-scort" for Planned Parenthood — you know, death-scorts. Those are the folks who wear the school crossing guard vests and block access from pro-lifers to women about to walk in and kill their children. Yup. Couldn't think of anyone better to be an honorary chairman for the World Meeting of Families.

Coming in a close second, however — because for Chaput, one just wasn't enough — he installed then-Philadelphia Mayor Michael Nutter as another honorary chair. Nutter has just wrapped up announcing to the world how proud he was that he and his administration were able to make Philadephia the most gay city in America. Whether that claim is actually true or not is beside the point. Nutter believed it to be true and was happy to take a bow.

So what does the "orthodox" Catholic archbishop of Philadelphia do? Well, make him an honorary chairman of the World Meeting of Families. What else?

Numerous well-known 'orthodox' clergy seem to all of a sudden be so terribly concerned with the state of affairs in the Church.

When news of this broke, Church Militant contacted the archbishop and his communications director to ask, Hey, what gives — are these reports correct? For the record, they were. I personally emailed Chaput and asked the same question directly. What I got, which everyone gets whenever they question Chaput, was an electronic tongue-lashing.

After a few back-and-forths where he kept dodging the question and insisted on calling my faithfulness into question for questioning an archbishop, he finally answered the question. It was, "Michael, you just don't understand how you have to cooperate with civic leaders to get things done." Well, if cooperating means appointing child killers to honorary posts at a Catholic event, he's right. I don't understand.

We only dig this little gem, of which we have many, out of our files to point to the complete idiocy, hypocrisy, double standard, whatever you want to call it, on the part of these "good" bishops when it comes to what they have wrought.

Faithful Catholics are willing to canonize an "orthodox" bishop because of something he says that's on the money, but they can't stand to hear the rest of the story. They are completely willing to give these men a pass; unwilling to face the music that it was them back in the day that set the stage for what we now are living through.

Even to this day, not one of them has spoken up and decried the homosexuality within their own ranks within the seminaries they were in charge of. Within the parishes where they let all that filth go on, the perversion of doctrine — to name just one thing — they let the Church become more corrupt on their watch. And yes, they absolutely knew it, knew all about it.

Yet they rationalized every step of the way that it was more important that they remain a bishop in a diocese, so they could bring about good change, than openly confront the corruption and pay a price for it. Talk about hubris. The arrogance is outlandish!

"The truth can be ignored because what's really important here is that I retain a place of prominence where I can operate from behind the scenes and effect quiet change — this is my strategy for saving the Church."

Well, Your Eminences, you failed — in spades.

Your Eminences, you failed — in spades.

These men are always angling, having secret this or that, being discreet to a fault, while the Church and world burn to the ground. They tell faithful Catholics everything they want to hear in private gatherings and never have the intestinal fortitude to do a blessed thing about it.

These "good" bishops (if there really is such a thing these days) all know the truth of the miserable condition of the clergy — the lack of faithfulness, the rampant homosexuality, the freeloading — and yet they say not a single syllable about it.

Faithful Catholics must ask themselves, Why? Why do they never talk about the real internal crisis? And they can't blame it on "Pope Francis will remove me from my diocese." Francis wasn't pope 10 years ago and beyond, and yet they sat there stone silent.

They have twisted up in their weak intellects somewhere that their primary duty is to protect not the Faith but the institution — total hogwash! How's that working for you, bishops? You should have all long ago been dumped, for pride and incompetence, at the very least.

There is not a single institution in the country that would have allowed the likes of you bumblers to continue in your positions. But you live off the fumes of the Faith breathed in by the few remaining faithful, and even in retirement, still will not come clean when you have nothing to lose.

To lash out at the effects of the environment you created with your daintiness and lack of fortitude is revolting to behold. How many gay men did each of you ordain? How many unfaithful men did you allow to remain in office?

Beyond speeches to friendly audiences, what kind of example of action did any of you set? How much of your own skin did you have in the game? We all know the answer. We just have to look around.

Save the pointless speeches — you're a day late and a dollar short. That ship sailed while you were in office. Go back to your cocktail mixers with some wealthy friends and then get to a monastery for prayer and penance for the rest of your lives.

You squandered the wealth of graces given to you by God precisely because you are weak men and took the easy path of nonconfrontation — the very hallmark of an emasculated man — despite all the bluster. None of you will go down in Church history as anything more than a footnote of those weak Churchmen who enabled the evil which destroyed a civilization.

Too bad someone didn't say all this to you back in the day. 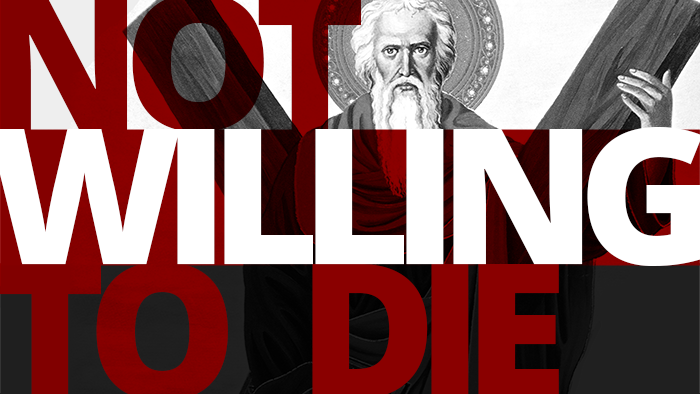 Not Willing to Die
Because they don't truly love.