And fight for Holy Mother Church — face to face.

This is going to be short and sweet: Get out of your homes and come to Baltimore, to Church Militant's Bishops: Enough Is Enough prayer rally.

The goal of this rally is actually multipurpose. Most importantly, it's to address the foul deeds of cover-up and corruption of many of these prelates. As Ven. Fulton Sheen implored the laity, it's up to us to remind the bishops to be bishops and the priests to be priests.

And we aren't going to split hairs here: Through a huge variety of ways, these men have contributed to the demolition of the Faith in the United States, and they need to be confronted with that reality so they can repent. They have supported sodomy, child murder, liturgical corruption, sacrilege of the Blessed Sacrament and a host of other grave sins and evils — including the poor formation of seminarians who then go into parishes and keep the rot in place. There are also plenty of Catholic-school personnel members who are ill-equipped to manage their own spiritual lives due to horrible catechesis.

Many of the bishops have their feet firmly planted on the broad path of eternal destruction, and they need to hear that loud and clear.

It's up to us to remind the bishops to be bishops and the priests to be priests.

Having 3,000 Catholics praying for them right next door to their policy meetings will bring that point home. How they respond is on them. But that doesn't remove the responsibility from us to intervene for them. Faithful Catholics have a duty to pray for the souls of these shepherds.

As despicable as many of them have been with their sex abuse, cover-ups, promotion of sodomy, attacking of good priests, driving faithful men from the seminary, the destruction of belief in the Real Presence, their supplanting of theological truths with Marxist political policies — whatever outrageous sin against Heaven they can be rightly accused of — no one can desire their damnation. We cannot be indifferent to it. We cannot sit back and, at our own judgments, say we had little care for their souls.

Even in the case of shepherds whose actions have likely led many to Hell, we cannot simply surrender them to Satan. It doesn't matter what they think of us personally or whether they want to falsely accuse us of being divisive, they have to see with their own eyes that we desire their salvation and are earnestly praying for that because Our Lord commands we do such.

Another goal is to expose the rot and gather together in a large and boisterous manner so as to show that we know their game of evil and to let them know a new day has dawned. Also, we need to gather in one large body to provide visible support for the victims of these men, both physical and spiritual. Justice must be visibly sought and fought for. But we also have to stand visibly for all the world to see that faithful Catholics will speak up for the weak, the defenseless, those with no voice, the victims.

This rally is going to get widespread coverage because of its size and speakers, so imagine what a sign this will be for the victims — victims of sexual abuse, victims of doctrinal abuse and those who have been driven from the Church by indifferent or even wicked leaders.

We're going to have a panel of persecuted priests who are often the forgotten victims because of how bishops wipe them out. Seminarians will be there as well, many of whom became disillusioned with the Faith because of what they endured in seminary — physically, spiritually or doctrinally.

Church Militant and others are continually being accused by these rotten shepherds of being divisive, as though division is a bad thing per se. Your Excellencies and Eminences, have you not read Scripture? Division is precisely how all of human history will be brought to an end. "These will go off to their eternal reward and those will go down to their eternal destruction." It can't get much more divisive than that.

And one other reason to stage a massive event like this is to assure each other in person by gathering as a single body to support and reinforce one another. We hear all the time from new followers of Church Militant comments like, "I thought I was crazy"; "I thought I was alone"; "I didn't think anyone else saw these things."

This is not a wrongheaded attempt to subvert the authority of the bishops. It's a show of force to tell them that we've had it. Enough is Enough.

Among many of the bishops, there are some who are just weak and easily manipulated by more forceful personalities in the bishops' conference. We want to encourage those men to grow a backbone and stand up to the rot. They need to ask the question, "What's even the point of this conference?"

It's a good question because, in fact, it has no authority on its own. It is little else than a vehicle for pushing modernist goals. Enrollment isn't mandatory for any bishop, so why are any still a member of this body? Why not just leave? "Come out of her," as Scripture provides for.

It is true that the laity members have no authority. But we do have power in the form of prayer, influence, donations, holding fast to the authentic Faith, challenging error to clergy every time we encounter it and informing others of heresy, dissent and error.

Faithful Catholics have a duty to pray for the souls of these shepherds.

All of this is a big change in how the laity must understand their role in the Church, just as Vatican II pointed to. The pray, pay and obey days are over. In their place are the days of organization, education, confrontation and clarification. We are Catholics because this is the one true Faith. If the bishops don't want to preach it, believe it or act like it is the true Faith, then the onus shifts to us.

So come to Baltimore with thousands of others, and commit the rest of your life to fighting for the truth of Holy Mother Church. We'll see you in person on Nov. 16, 2021. 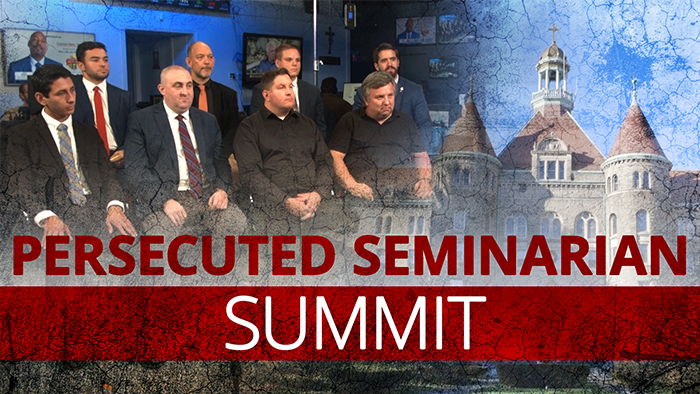 Persecuted Seminarian Summit
It's all coming out.