And we will expose you.

We'll be blatantly and directly honest about the purpose of this Vortex: If you are a bishop and you go after a good priest, we're coming after you.

If you are a bishop who goes after good priests for nothing more than speaking the truth, our experience has been that you have a lot of trash in your closet, and we can easily find out about it.

At this point in the life of this apostolate, Church Militant has grown so large, blessed be God, that we now have contacts with literally hundreds of priests, scores and scores of people who work in chanceries and thousands and thousands of laity who are active in our Church Militant Resistance in every diocese in America.

Whether it's with the help of your former seminary classmates, the decent men you kicked out of seminary because they wouldn't sleep with you or the homosexual priests who have since left the priesthood who know all about you, digging up the dirt about your past is made easy because of our network.

If you attack good priests, we're going to hit 'send' at will. Game on!

Your homosexual network has ruled the Church in the United States for decades. Now, another network, the Church Militant network, is in a position to come after you. We have 65 people working here, digging and taking calls and getting emails and interviewing everyone short of your mothers, so consider this fair warning. We know your dealings (or can easily discover them) when you worked in the chanceries before becoming a bishop.

We know whom you hung out with in seminary — what your associations were and with whom. For example, we have a picture of Cdl. Cupich with now Corpus Christi bishop William Mulvey during their seminary days that was sent to us by someone who knows Cupich and is sick of his filth and being an enemy of Christ. This couple was referred to as "Mr. and Mrs." and was collectively known as the "lovebirds" by the other seminarians.

Both boys were at the North American College (NAC) in Rome together in the early 1970s. The NAC has a homosexual-bathhouse reputation stretching all the way back to then. Just a thought, but do they stay in the same hotel room at the bishops' meetings? In fact, multiple bishops, including Cdl. Dolan, are being sued right now for that sort of thing at the NAC.

Anyway, that picture is just one example of all the material Church Militant has and continues to accumulate from the things sent to us by untold people. So, fair warning again: If you attack good priests, we're going to hit "send" at will. Game on!

Now, let's turn our attention in greater detail to some more sordid filth involving bishops and some other blasts from the past, shall we say. In today's spotlight, a returning guest, Bp. Alberto Rojas, will help explain the rotten past most of these current bishops have from their long-ago days.

We have another picture of a bunch of foreign nationals who were shipped to the archdiocese of Chicago and dumped into the homosexual hothouse started by Cdl. Joseph Bernardin in the 1980s. The facility is known as Casa Jesus, a place Church Militant has mentioned in the past. We'll return to this picture in a minute.

First, a brief review: The archdiocese of Chicago under Cdl. Joseph Bernardin, the diocese of Metuchen under predator Theodore McCarrick and the diocese of Buffalo under Henry Mansell all set up a homosexual seminarian pipeline from Mexico and Central and South American countries. In these pipelines were an assortment of young men brought in on visas and shipped to these facilities.

The history here gets rather sordid. Some of them had been kicked out of their seminaries for being homosexual. Others were actively recruited by American clergy under these bishops, targeted as sex toys for priests back in the respective dioceses. Some were willing, others were unwilling; but in either case, once landing here in the United States, many became the sexual playthings of multiple priests stretching across multiple dioceses. Again, some willingly, others not. And if the phrase "human sex trafficking" springs to mind, then your mind is working.

In the summers, the boys were assigned to "certain" clergy. Gay or not, if they refused to go along with business, they were threatened with being deported immediately. These homosexual facilities were really little else than holding pens for young immigrants who various priests might want to use and abuse.

These young men didn't know the language, although they did take classes to learn English. They had no money and no recourse. They were at the mercy of homosexual clergy who knew the kids were completely defenseless.

This went on for more than 10 years, even longer in Buffalo. Now, back to the picture mentioned earlier: Of the 15 young men in the photo, only one of them went on to be ordained. The photo was taken after Bernardin had already died, which is why Cdl. Francis George is posing in the middle. However, turn your eyes to the priest on the far left. He was in charge of Casa Jesus — a holdover from the Bernardin days. And remember, Bernardin was homosexual and did everything he could to turn the Chicago archdiocese that way, including putting homosexual men in key positions.

That priest is Fr. Michael Herman, another homosexual. Young boys were shipped up from south of the border and dumped into a house run by a homosexual priest. How do we know Herman is homosexual? Because he says so on his current company page, where he is chief executive officer of Chicago House, an AIDS/HIV outfit. He says he was a priest and then left to be fully gay. He also says he met his current husband 23 years ago.

However Herman wants to live his homosexual life now, he had no business being in charge of Casa Jesus in his past. At the very least, he would have malformed young seminarians, shaping them in his own homosexual image.

One of the "students" in those early years of Casa Jesus was none other than Bp. Alberto Rojas. Remember who set this house up (Bernardin) and what it was set up for (certainly not to form strong men into holy priests). It was meant to feed the sexual appetites of homosexual men in the Chicago clergy and, in some cases, ordain foreign homosexual men to sustain the flood of homosexuals into the American priesthood.

Any man who passed through this house and is now ordained — and especially is now a bishop — is immediately questionable. And lest anyone think this is ancient news and that the impact of this filth is somehow negligible now, consider back in 2018 when Fr. Diego Berrio, pastor of Misión San Juan Diego in Arlington Heights, was arrested for having sex with another priest in a car in Miami. Berrio is an alum of Casa Jesus, one of many possibly ordained for his "specialties." In fact, the hothouse was so notorious that Cupich was forced to shut it down.

Another actively gay alum is Fr. Marco Mercado, whose lifestyle also became known in the secular media in 2016. He eventually had to apologize for his homosexual activity with an adult man after being sidelined by Cupich. Shortly after, San Antonio archbishop and pro-homosexual Gustavo García-Siller brought the Casa Jesus alumnus and sexually active priest to his new Texas archdiocese (until Cupich caught heat for allowing it and ordered García-Siller to ship Mercado back to his native Mexico).

So here is a fellow who came from Mexico, went into Bernardin's homosexual hothouse as a foreign national, got ordained, had sex with men, got busted and, after almost getting saved by a different pro-gay bishop, got shipped back to where he started all those years ago —another broken man, another ordination that should have never happened.

In the case of Rojas, his entire clerical career and seminary days were spent in Bernardin's heavily homosexual archdiocese. Yet, when a priest in Rojas' diocese of San Bernardino, the Norbertine Fr. Francis Gloudeman, stepped to the pulpit and decried the sin of sodomy, Rojas sacked him.

The Casa Jesus "graduate" Rojas was one of the bishops who signed the anti-Eucharist document letter, and he also signed onto the pro-gay bishop statement supporting gay rights for teens. Because of his long history — raised in the embrace of homosexual members of the Church — is Rojas homosexual? Why would he feel the need to punish the priest who did nothing more than preach Catholic doctrine?

Speak up, good priests. Church Militant has your backs.

Did he leave the seminary in Mexico as a teen willingly, or was he kicked out for homosexuality? How did he find his way to the epicenter of homosexual seminaries for Hispanic youth? Or was Rojas sexually abused during his Casa Jesus days and then passed around to various Chicago priests as a teen and young man?

If he is a straight-up believing, squeaky-clean Catholic bishop, how on earth did he get through Casa Jesus intact? Does he claim he never saw or heard any of this Casa Jesus history during his time there? He was there with other Hispanic young men, some of whom were being abused and passed around or were active homosexuals themselves. Does he expect people to believe he knew nothing?

See, a bishop's background, most of which very few day-to-day Catholics know about, raises serious questions about their motivations for attacking good priests. Church Militant will continue to dig and research and investigate the hidden, little-known backgrounds of every single crooked, questionable bishop who raises a hand against one of these priests. You can take that to the bank, Your Excellencies. You never know what photos we have of you in our vaults. You aren't the only ones who have damning secret files.

Speak up, good priests. Church Militant has your backs. 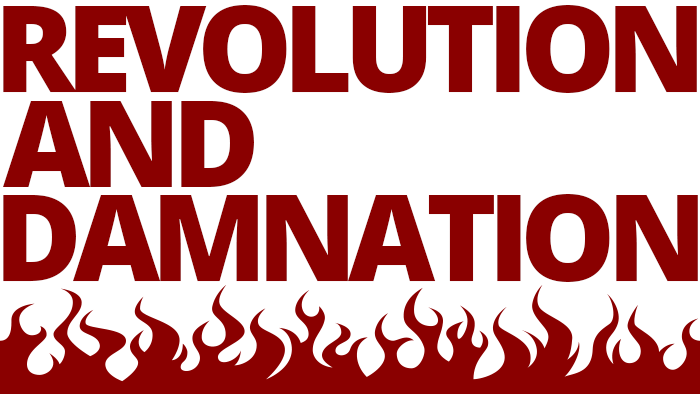 Revolution and Damnation
They are more closely related than you think.