Traitors — all of them.

As 2020 draws near to its close, one good thing that has happened is the revelation of just how many communist bastards have set up shop in the Church and the government. Many faithful and patriotic Catholics and Americans have gone about their lives for decades almost totally unaware of the evil in their country and their Church.

A few sensed something was not quite right here and there but were content to dismiss most of it as isolated and not connected. A smaller group concluded that this seems to be a lot worse behind the scenes than what it appears on the surface, intuiting (correctly) that it was largely all connected somehow through some nefarious networking.

And then there was the even smaller group which was spot on in understanding that it is, in fact, all connected and related right back to communism — and, yes, in not only the country but also the Church. Count Church Militant in the last group.

True, we did not start there when we first established this apostolate 15 years ago, but as we have been following the evidence as it emerged over the last decade, we have arrived there now. And our reporting on all this, as we followed the trail of truth, has earned us massive backlash from those who want to keep all the evils covered up. Oh well. Tough.

And, speaking strictly spiritually, it makes complete sense that communism would firmly plant itself in both Church and State. It took them a century, but they have done it quite ably. In 1917, when the Queen of Heaven appeared to the three children at Fatima, this was her warning from Heaven that communism's errors would spread throughout the world.

It makes complete sense that communism would firmly plant itself in both Church and State.

We disregarded that warning, and, well, here we are now. Marxism, at least for the time being, needs the Church to put a friendly face on the evil and make it appear not evil, even make it appear Christian. Check that box, and more in a moment. But it also needs to control the levers of government so that its goals can move from the streets to the halls of power.

As an aside, the role the media plays in all this is to keep you in the dark. Spread the lies, smother the truth. It's a simple formula. So let's quickly look first at the usurpation of government. Trump says massive voter fraud occurred. There are now 2,000 sworn affidavits that testify to this. Church Militant has interviewed multiple eyewitnesses from all four states in question, plus Nevada and Arizona.

All of their stories match up, in the large, to wit: Election officials in each state changed the rules laid out in their own constitutions about how the election was to be managed, resulting in tens of millions of mail-in ballots being used. In all four cities where the vote count swung the state to Biden and a giant Trump lead was overcome (Atlanta, Philadelphia, Detroit and Milwaukee) the vote-counting suddenly stopped late in the evening, poll observers were sent home, hundreds of thousands of ballots showed up, counting resumed in the dead of the night unsupervised, and when people woke up the next morning, those leads were wiped out or very close to being evaporated.

The following day, GOP poll observers were not allowed in to watch the final votes being counted, and the few that were allowed in had to stand many feet away and could not observe anything. And if they raised concerns, they were escorted out. The management of the ballots (chain of custody, verification of signatures, correct counting, correct tabulation, fair observation of the counting, etc.) was handled extremely poorly — to say the least — and the results cannot be verified as a result.

Additionally, all sorts of statistical analyses of the vote "results" have shown massive issues — in distribution, timing, trends, probabilities and so forth. These analyses were done by very reputable mathematicians at, for example, Rutgers, Harvard, MIT, etc. Likewise, historical trends in the presidential race were completely turned on their heads.

Bellwether states, bellwether counties, predictable state combinations, voting patterns across multiple voter categories, down-ballot victories for the GOP (almost flipping the U.S. House) were uniformly defied by a Biden "victory." Never before in American politics has something like this set of events occurred.

The odds of the incumbent losing with even one of these things happening are slim. The odds of him losing and all of these things happening in combination place the odds of an actual Biden win at one in a quadrillion, as we reported the other night. The rebuttal to all of this has been, on the part of the media (who are Democratic allies): "It's all lies and misinformation; there is no evidence." Well, that's not a rebuttal. It's a refusal to engage with the evidence.

And, as a result, half the country believes election fraud took place. And if Biden takes the oath on Jan. 20, he will be an illegitimate president. That is causing huge numbers of Americans to assess what they will do in their day-to-day lives. Not a small number have already begun a migration from blue states to red states, fearing Biden administration support of a state-run tyranny.

Already, actual threats are coming from multiple Democratic lawmakers that those who supported Trump better watch out. A specifically detestable one came from a state legislator right here in Michigan. She then doubled down on it. That's how communists are: Friendly looking at first — until they believe they have the upper hand — then they unleash hell.

Of course, the same is true in the Church, as Marxism (under the guise of the modernist heresy) has firmly implanted itself here as well. Although obviously administered differently than a secular government, many of the same underlying principles are at play: Evil leaders who are traitors have usurped their authority to bring about radical change.

If you look even not all that closely, you can see some of this. For example, the leading proponent of Marxism in the world today is communist China. And Marxists, both in the U.S. government and the Church, have very close ties to the atheistic state. We know all about Hunter and, now, Eric Swalwell, not to mention scores of others as testified to by the Chinese communist professor who let the cat out of the bag in a series of lectures about how China has spies and plants all over the government.

In the Church, the Vatican-China accord is example number one, as are Vatican officials making the ridiculous assertion that China puts into action the Church's social justice doctrine more soundly than anyone else on the planet. I'm not sure when forced abortions became part of the Church's social doctrine, or religious persecution of millions, or a concentration camp setup that would make Hitler blush.

Likewise, in the administration of the Church, the Marxist bishops are right in lockstep with their Beijing buddies as well as Beijing Biden. They shut down opposition faster than you can say "Tiananmen Square." If a priest preaches the truth, he is called into the bishop's office, assessed on the spot as having "anger issues" and shipped off to St. Luke's nuthouse for clergy.

St. Luke's is part of a small network of what amounts to little other than a concentration camp set up for "dissident" priests. And like China, the Marxist administrators use your money to pay for it all. Evil men are in key positions in the Church and the government. They each want their respective institutions completely refashioned along the lines of Marxist ideology, and they have already had great success in that area.

But both will happily throw off their disguises as soon as is convenient, and many have already begun to do so — sensing, rightly or wrongly, that their moment has arrived. So as we stand on the brink here, we must first pray, in many ways like we have never prayed before. But we must also not remain silent in the temporal realm.

Prayer and works are necessary. 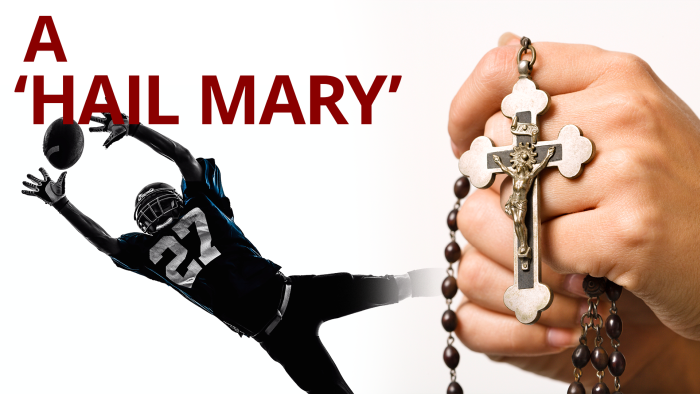 A ‘Hail Mary’
Truth: It really is a Hail Mary.