Communion Wars and ‘the Duck’

Some things aren't that hard to figure out.

May 15, 2020  0
Podcast Available for Premium Subscribers

With a good number of dioceses now slowly starting to open back up — with all the accompanying notices, cautions and warnings being issued by various bishops — it's all one big jumble. In some ways, it's a perfect symbol for life in the Church these days — confusion, conflicting information, no clarity, contradiction.

Even what should be an easy call on reception of Holy Communion has turned into a war of words and contradictory statements by bishops, among bishops and about bishops. But back to the point of it being symbolic. It really is.

The Real Presence is the source and summit of the Faith, but the massive controversy and confusion and lack of clarity around this bedrock teaching is reflected in the confusion and contradicting statements about reception.

Seventy percent of American Catholics do not believe in the real presence — the teaching that Jesus Christ is really, truly and substantially present — Body, Blood, Soul and Divinity — under the appearance of bread and wine. From this sacrament — the Blessed Sacrament — all the others find their source and their destination. Yet, most Catholics don't believe.

You wonder if ... the slow move to begin opening parishes wasn't so much a move to give the people back the Bread of Life, but to get those collection baskets moving.

It was Pew Research that released that stunning revelation a few months back. And for the record, it was only stunning if you've been in a cave for the past half-century.

If you examine Pew's data, an interesting point emerges: Of the 70% who don't believe, half of them flat-out reject the Real Presence and the other half don't believe because they say they were never told.

So in short, here's the straightforward breakdown:

It's probably not that too far afield to think the same distribution applies to members of the hierarchy as well.

Communion in the hand is, frankly, disgraceful. It's permitted, but so what? — so are girl altar boys. The spiritual abuses at Mass, tolerated by so many shepherds, will weigh heavily against them at their judgments. Owing to their own lack of belief, either they were never told or they reject, they have passed that lack of faith on to the sheep.

Remember the old adage "You can't give what you do not have"? Well, the opposite is also true: You can only get what you're given. And if so many are lacking faith in such a fundamental teaching, it means they were either never given it, given it very poorly or given it by those who, through their own lack of faith, gave it in such a half-hearted way that it was never able to be sufficiently understood so as to be believed.

Given all this, you wonder if, behind the scenes, the slow move to begin opening parishes wasn't so much a move to give the people back the Bread of Life, so much as to get those collection baskets moving again.

Earlier this week the archdiocese of Boston's Cdl. Seán Patrick O'Malley admitted that his diocese has taken it so hard in the pocketbook, that a huge percentage of them will not survive and will have to merge.

Right here in Detroit, Abp. Allen Vigneron last week in a secret video conference-call with his priests had to tell them that, come August, there won't be enough money to meet the chancery's bills, and they're going to have to take out a loan.

But while we've heard no end of the financial woes, there's been hardly a murmur about the woes surrounding the lack of faith in the Real Presence. In fact, many of them seem to be doubling down on it.

There's a war over reception because there's a deeper war over belief.

Even before the Wuhan hit, the teaching on the Eucharist was beyond pathetic,. It was essentially missing in action. If bishops knew — which they did because some commented on it — the disastrous findings of the Pew Research, why didn't they immediately start to reverse course? Why didn't a note go out from the bishop's conference, which each bishop could implement in his own diocese, instructing priests to inform the faithful not to approach for Holy Communion if they were conscious of any grave sin — thereby committing sacrilege — or if they needed to get to confession if they had willfully missed Mass since their last reception?

The truth is, none of this was done. The bishops gathered in November for their regular useless conference meeting, ate well, had loads of booze, stayed in very nice hotels, talked about business, ate and drank some more and went home.

The appalling lack of faith in the Real Presence among the faithful rose to the level of idle chatter, perhaps, among some of them, with some probably even high-fiving each other secretely that that old medieval teaching was finally going the way of the dodo bird.

Sometimes, things in life are complicated. But many times they are not. If a group of men who are supposed to really believe something can transmit that to a somewhat willing audience, then either they don't really believe it themselves, or they don't care enough about it to convince others they should care.

So no one can be really surprised — as the Communion wars heat up with the reopenings — that there is a war. Of course there is a war: There's a war over reception because there's a deeper war over belief. 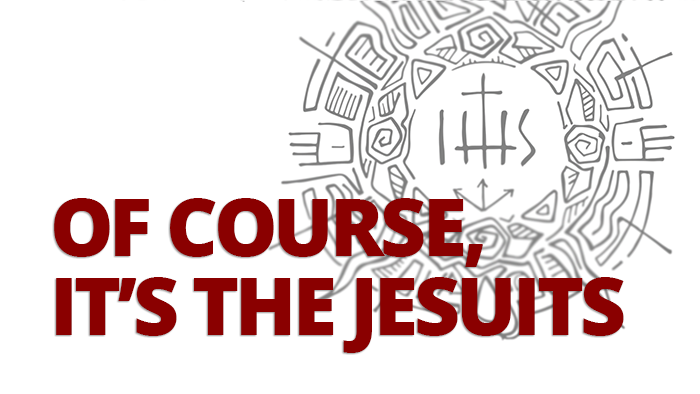 Of Course, It’s the Jesuits
Isn't it always?