Divisive as well as childish.

For more information on the Roman Catholic Revival event on Sept. 14 in Crookston, Minnesota, click here.

One of the hallmarks of modernism and its bishops in the Church, according to multiple, multiple clergy who have talked to us, is the incredibly low level of vindictiveness and pettiness some of the prelates will stoop to.

Take, for example, the current bishop of Crookston, Minnesota, Michael Hoeppner, who seems to have a problem with integrity.

Here's the background: A group of faithful Catholics in his diocese contacted us here at Church Militant and invited us to come speak at an event they are calling "Roman Catholic Revival."

Please see the attached link provided below for details of the engagement being held on Sept. 14, the Feast of the Exaltation of the Holy Cross in downtown Crookston — hope to see you there.

Now a few weeks back, Bp. Hoeppner felt so strongly that the Church doesn't need restoration and that Church Militant are a bunch of divisive meanies that he issued a public declaration denouncing us and the event.

Of course, that's not divisive because a bishop did it — kind of like Jussie Smollett isn't a racist because he's black and gay.

And to the integrity question, Bp. Hoeppner actually included an untruth; whether it was a deliberate lie or he's just misinformed is between him and God, but whichever way it is, he's wrong, like he is about many things.

That's completely untrue. Church Militant has never applied for press credentials from the Useless Conference — so how could they ever be revoked if we never had them in the first place?

We kid you not. Here's the announcement.

Yep, a conference geared toward youth designed to directly compete with a conference set up by his sheep, who are unsatisfied with how the Church, with its current leaders,  is guarding their souls.

Think about that. He went out of his way to take his diocesan resources and actually set up a competing conference on the exact same date and time. Talk about childish, petty and divisive — seriously.

There is no level these modernist bishops who seek to protect the status quo at all costs will not sink to.

Now here's what's funny about all this. In his open attempt to submarine the conference by faithful Catholics, he is promoting a conference for youth based on last year's Youth Synod in Rome, a stacked deck synod if there ever was one.

Teens and young men and women who are theologically orthodox told Church Militant that they were essentially shut out of any deliberations both before and during the synod.

"Oh, you believe in 'tradition'? We're so sorry, you need to get with the times" was what they got in a nutshell.

The young "voices" that were given high priority were the ones from poorly catechized folks and, surprise, are all down with homosexuality and open Communion and anything else not Catholic.

What's more, the bishop's event is also being billed as one with close ties to Life Teen, the Protestanized program which instills in young people's minds that what's important in the Church is fellowship and guitars.

Pay no attention to all that sacramental grace and moral theology and all that stuff, just bring your beanbag to Mass and chill for a while, throw your arms up in the air and sway and "feel" the Holy Spirit — until you don't and eventually leave the Church.

And for the record, Life Teen was founded by a child molester, former priest Dale Fushek, who was charged with 10 counts of sexually abusing teens and young adult males. I know, right? How surprising.

A plea deal got him a light sentence, but he was eventually excommunicated by Bp. Thomas Olmsted for opening up a Protestant praise and worship center in disobedience — exactly the type of program I want to send my kids to learn about Catholicism.

Now, if I'm a parent in Crookston, and have a choice where to send my child, or if I'm a young adult and have a choice about hearing authentic Catholicism in all its raw glory, or want to keep singing "Kumbaya," I know which event I'm heading to.

Talk about divisive, bishop. It's actually more childish and petty than divisive, but it's still divisive.

However, I bet you won't have a problem asking the folks you are dissing, your sheep who set this up, for a fist full of money when it comes time for the annual diocesan collection, right?

Oh, and one other point, not a small one. Bishop Hoeppner was actually sued by one of his faithful, a man on his way to become a permanent deacon.

Ron Vasek sued Hoeppner and the diocese for "coercion, negligence and nuisance" stemming from a claim by Vasek that Hoeppner tried to coerce him into silence about a case from 1971 when he was 16 years old and was sexually abused by a diocesan priest back — ah, more Church of Mercy!

Hoeppner settled the suit and paid Vasek an undisclosed amount. But what's disturbing is that it appears Hoeppner lied, multiple times, in his recounting of events.

Vasek claims that the bishop threatened him during a private meeting, bullying him into signing a statement which denied the allegations, using the strong suggestion that if he did not sign, the bishop would take it out on his son, who was a priest for the diocese of Crookston.

The bishop actually released the letter, sort of proving he actually did make him sign something saying nothing happened.

And to top it all off, Vasek says the letter Hoeppner released is not the same one he signed originally, but the point remains, there was a letter the bishop forced him to sign.

And the letter was coerced, making Hoeppner having the dubious distinction of being the first bishop in the United States to be civilly sued for coercion — boy, talk about divisive.

Hoeppner denies any such thing happened, but given the track record of U.S. bishops over the past half-century, Vasek's story sounds much more credible than Hoeppner's.

What's interesting here is this: The accused priest, Fr. Roger Grundhaus, eventually had to be suspended from public ministry by Hoeppner.

So, there you have it. Church Militant will, of course, keep our pledge to speak with the good and faithful Catholics next month, Sept. 14, in Crookston, regardless of the local bishop's petty and vindictive little last-minute conference.

If you're in town and feel like coming, as well as making a statement if you so desire, drop by.

We'll be talking about the authentic faith and what the Church has perennially taught about salvation and Hell and the glories of the Faith and the majesty of the Church, you can bank on it.

And by the way, thanks to the generosity of the loyal Catholic sponsors, the Roman Catholic Revival event where Church Militant will be free.

The bishop is going to hit you up for 10 bucks to go to the Life Teen thing. 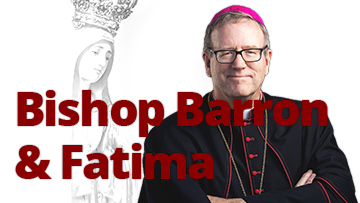