Touched. Off his rocker. Out to lunch.

New Yorkers have a local expression, "That guy's mental" — as in, "Hey, Louie's mental." It's not a compliment. It means pretty much what it sounds like, that there's something wrong upstairs.

He says Cuomo shouldn't be excommunicated because it would be giving ammo to the enemy — that the Left would seize on the excommunication and portray Cuomo in a sympathetic light. Yeah, they probably would — so what? Is that worse than allowing the world to think — or actually realize — that U.S. bishops are lily-livered cowards when it comes to the hard truths.

But then again, based on decades of inaction, the world already thinks that. So here's an opportunity to actually begin to turn things around and set the record straight. The reality is Dolan is an emasculated wimp who looks for excuses to avoid teaching Church teaching.

For example, when he was on FOX & Friends answering questions from the hosts about all this, FOX actually took down and edited out part of the live interview where Dolan simply got it wrong about Church teaching.

He said, in sum, that those involved in an abortion are not excommunicated, in direct defiance of existing canon law. Here's the exchange:

Steve Doocy: "Have the rules changed inside the Catholic Church, because it used to be pretty black and white about 'yes, no,' now you're saying, 'Come back.'"

Cardinal Dolan: "Yes, you would say, yeah, you would say that it used to be pretty, pretty clean that an abortion would cause the excommunication not only of the one who did it, people who encourage it and the one who had it. The Church, in the last 50 years, beginning with Pope John Paul II and especially intensified under Pope Francis, has said, 'I don't know if that's Gospel values here' because mercy trumps everything."

And this is where we can freely say: Dolan's mental.

What he said is simply incorrect. Here is canon law — existing, on the books right now — canon law 1398: "A person who procures a completed abortion incurs a latae sententiae excommunication" — meaning, kill the unborn baby and you are automatically excommunicated as well as the "doctor" other personnel and friends or family who conspired in the killing.

Sorry, Cardinal Dolan, you're wrong — flat out wrong. There are exceptions to the canon — for example, someone physically forced against her will, or a child, but those are exceptions. The rule is the rule, and Dolan seems to have no knowledge of it. And he doesn't get to say unchallenged that "oh, we are more merciful than that now."

First of all, that's wrong, so either he is flat out lying, which can't be taken off the table, or he is woeful, this prince of the Church, woefully malformed in what the Church actually teaches. Neither option is good.

Secondly, the implication is that for the past 2,000 years the Church has been unmerciful. After all, in a first-century teaching manual — 1900 years old — the Didache, willful abortion incurred expulsion from the sacraments for 10 years.

The Didache was the first recorded teachings of the Apostles themselves. So Dolan says the Apostles were unmerciful. The man is flat out mental. And then, he writes an opinion article in the New York Post where he asks the question, "Why are Cuomo and Democrats alienating Catholics?" — again proving he's gone completely mental.

The answer, Your Eminence, is because you and so many of your worldly emasculated brethren in the episcopate have been so busy watering down the Faith and confusing them that there aren't really that many of them left.

Cuomo, being a prime example of that, has done the political calculus and the answer is they don't give a rip about alienating Catholics because there are so few left that they make no difference at the polls in New York as well as many other places.

Secondly, Dolan and the rest of his mental crowd are the ones who actually helped get these guys elected and keep them elected by their constant sucking up to them and wanting to be seen in pictures with them and rubbing elbows with them and hobnobbing. It's disgusting. Have some dignity for the love of God. Know your office.

For 10 years in New York, Dolan has been on a PR tour of the local media with his stupid bombastic laugh and "aw shucks" fake persona, thinking he could somehow charm people into believing the truth.

Dolan is viewed as a huckster, a snake oil salesman or a bad used car dude who has nothing to sell that anyone is interested in.

But he has had the prestige of his office — which has eroded tremendously under the weight of his reign — which still has another five years to go — talk about people needing mercy; resign already.

And because of his office, the media love to play him and follow him around and put his picture on the papers; and being mental, he's believed all of that is good and helpful to the Faith. It reinforces his own bloated self-importance, which is the butt of jokes behind his back.

But — and this is the problem when someone is mental — they don't understand the world around them. They aren't plugged in because they lack the capacity to understand the obvious.

Dolan is 0 for 4 in his political dealings. He has been played and used in every political cause he has gone after. First, he lost — if he ever really cared about it — the gay marriage fight in the state back in 2011.

Second, he lost the state funding for Catholic education initiative, something lawmakers, including Cuomo, were never going to give him. And for that deal, he allowed gays into the St. Patrick's Day parade — and they stabbed him in the back anyway.

Dance with the devil and, well, you know what happens.

And then the fourth "rock his world" defeat is the new law extending the statute of limitations for suing the Church for all their sodomite priests raping altar boys — which they deserve.

Dolan is completely mental, and the reason he is is because he long ago gave up the only job he is supposed to be doing: defending souls. He has been a boy in a man's game with New York's Killer Catholic politicos, and they have chopped him to pieces.

Dolan is owned by Cuomo, so much so that Dolan believes the teachings of the Church have changed — completely mental. 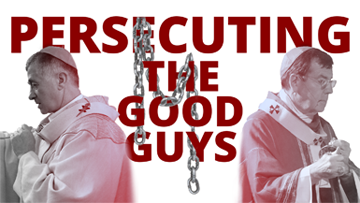 Persecuting the Good Guys
It's like some bishops just LIVE for it.