Concealing a Lie in the Truth

Thanks to constant coverage by Church Militant and others regarding Fr. James Martin's homoheresy and constant personal appearances on Church property, some U.S. bishops are finally beginning to speak.

This was occasioned by Martin's talk last week at St. Joseph's University in Philadelphia, a Jesuit property.

The archbishop of Philadelphia, Charles Chaput, issued a statement after Martin had left town cautioning Catholics about what Martin says.

That is at least a start, but the statement could be classified as a day late — literally — and a dollar short. More on that in a moment, but first, Chaput was not alone among bishops with words about Martin.

And even Knoxville Bp. Richard Stika jumped on social media to join his voice to others warning about Martin.

These are all good starts, no doubt, but when it comes to a person like James Martin, who some on social media have taken to calling "Brokeback Martin" for his advocacy of homosexuality's acceptance, the warnings and cautions need to be considerably stronger.

Various clerics when speaking about Martin publicly always come out and first thank him and heap all kinds of kind words on him for his "ministry." They do this as a kind of way of backing into the discussion — a kind of "you are a nice guy, but" type of approach.

Only some point later do they begin to approach his errors, and only then very delicately.

First, Martin deserves exactly zero praise or applause for his "ministry." His occasional use of truth should not be praised or even acknowledged.

Martin does, here and there, let words fall from his lips that are arranged in such a way as to convey a true thought. But he uses that truth merely as a vehicle to smuggle in the great lie.

For example, he says he has never challenged Church teaching. That's about as hair-slicing, technically "true" as a person could get. What he always deftly avoids, however, is not saying he doesn't challenge the teaching, but if he actually believes it. That is an entirely different issue.

Martin is about as skilled a practitioner of wordsmithing as you will find. For example, he routinely acknowledges what the Church teaches — big deal.

Just because someone says something that is true should not carry with it some automatic praise for the person.

By that standard, Our Blessed Lord should have turned around to the devil during their desert encounter and praised him for accurately, truthfully quoting Scripture. Satan spoke the truth, in so far as he was simply restating Scripture.

But Our Lord didn't praise him, He condemned him because the intent in saying truthful words was to introduce evil just nicely packaged up. Martin is also extremely deceptive by constantly appealing to the fact that he has never challenged Church teaching.

That's because he's too slick to reveal his full hand; that would be Building a Bridge too far. Instead, he simply gives public approval of other things and people who challenge Church teaching.

He posts in support of Pride Month, a homosexual cultural corruption specifically envisioned to normalize sodomy and same-sex relationships.

He uses the term "LGBT" in reference to same-sex attracted Catholics non-stop, adopting the language specifically so as to condone it.

He states LGBT Catholic couples should kiss in Mass during the sign of peace.

He retweets other people's posts supportive of homosexual marriage. He sits on stage with civilly married homosexual men, praising their fidelity and support for each other.

Nowhere on record has James Martin ever actually affirmed the Church's teaching.

Simply stating it is not enough. A profession of faith from Martin himself needs to be elicited not saying he knows what the Church teaches but rather that he believes what the Church teaches, that homosexual acts are disordered, that marriage can only be between one man and one woman — that for same-sex individuals, their condition is a cross which must be borne by them, just as everyone who attains Heaven must bear his or her own cross in their own individual lives.

Martin wraps lies up in truth and then relies on a cowardly episcopate to not get to the actual heart of the matter. It's a clever strategy, and one that needs its mask ripped off.

At press time of this Vortex, a war of words, it might be called, was brewing between Chaput and Martin as Martin issued another response to Chaput, then Chaput responded to Martin's response.

Stay tuned for more on that as it no doubt develops further, but in the meantime, while we are speaking of things left unsaid, notice how terribly few U.S. bishops have jumped in on this — again, as of press time, as far as we can tell, only three.

Martin publicly states that he is grateful to Chaput for beginning a dialogue on this topic.

First question in the dialogue: Fr. Martin, do you believe, affirm and accept the teachings of the Catholic Church regarding homosexuality? 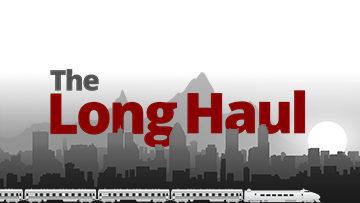 The Long Haul
A million battles. A hundred years.