In the continuing revelations being made at the intersection of Church and culture, President Trump said something very plainly Saturday at the Georgia rally in Valdosta — as plain, in fact, as the nose on your face. It's this simple point: Republicans are nice, and as a lady from the crowd reminded him, too nice.

Likewise, in last week's public hearing on election fraud in Michigan, Rudy Giuliani made the exact same point, that good people are too nice and have not realized just how mean bad people really are. Hopefully, it's a message that will resonate with political conservatives and enough Republican leaders before it's too late.

But moving from that point straight into the Faith, there are often major overlaps in how all these affairs play out because we are always dealing with human nature at the end of the day, regardless of the given arena. Too many faithful Catholics are just way too nice. For a variety of reasons, they simply let the evil in the Church (as well as the world) continue. In some weird, overly pietistic view of the second commandment to love your neighbor, they simply forsake all common sense and proper judgment.

The idea that it isn't Christlike to treat a person suspiciously or that it is sinful to weigh their words against their actions and determine that they are lying is errant. Living the Catholic life fully oftentimes means living in a state of tension, balancing two seemingly contradictory principles across a large spectrum of teaching.

Deciding how to live and respond and conduct our affairs is why we need prudence. Going to one side or the other of a given proposition often leads to chaos. For example, when Our Blessed Lord instructed the Apostles to go out and save the world, which is what His sacred command boiled down to, they flinched, understandably.

No, we should not always give someone the benefit of the doubt.

"You send us out as sheep among wolves," they said. A very correct first understanding, as many of us know and can testify to. But here comes the "balancing act" response: "Then be as cunning as the serpent and as peaceful as the dove." That may be the only time in human history that alignment has ever been made.

Today, and maybe longer than most realize, this divine command is being lived totally out of balance — way too much dove, nowhere near enough serpent. To have a personality that is suspicious of authority is seen as unholy or deficient or some such other degrading view. To regard someone who tells you something that doesn't add up as a liar or dishonest is frowned upon.

There is absolutely nothing in the world wrong, sinful or immoral about being suspicious of a leader, person or family member whose actions don't align with their words — even someone coming off as "holy" and pretending to be about the Faith and so forth. You have to consider are they just self-promoters making a living off you, telling you what you want to hear.

Are they advancing some personal agenda regarding schismatic groups, for example; deliberately withholding information from you that would undermine their cause or argument? Are they just trying to expand their email list or increase their Patreon donations by saying what tickles your ear?

Turning from laity to clergy, are the bishops being two-faced and malicious in reality, while in public presenting themselves as concerned "fathers"? Yes, at the very first instance, a person should be given the benefit of the doubt. But when words and actions begin to veer apart, then, yes, it is time to go from dove to full-on serpent.

Remember, these sorts of people are very good at the sly, slithering serpent role, presenting themselves as doves, all the while planning to strike like serpents — the wolf in sheep's clothing expression. Not for nothing do we have the expression "Watch what he does, not what he says."

Is a Catholic apostolate — or media personality — supported by schismatic groups or, perhaps, a few very wealthy donors who pull the strings?

Yet something in the personality and misguided spirituality of many faithful Catholics seems to preclude looking at the world and people in it for what they truly are: Fallen. Fallen mankind is capable of great evil, great deception, horrendous immorality. To walk through life as though that's not the case is to whistle past the graveyard.

Chalking up evil actions to some irrational excuse in the name of piety is to place your soul and body in danger. This is how wicked priests and bishops got away with raping thousands of altar boys and then using your money to pay off the lawsuits (not to mention the lawyers) when they got caught.

This is how they also got away with destroying the faith of tens of millions in this country alone with hardly anyone uttering a peep. See, that wicked lot is perfect at following the counsel of Our Lord, at least outwardly: Be as cunning as the serpent and as peaceful as the dove.

Cunning they certainly are. Yet the only way they are able to be cunning is because too many faithful Catholics are willing to believe their hogwash, their outward show. Look at their actions, at what they do, not what they say. Their words are a deflection. It's the same with politicians as well as supposedly reliable Catholic information sources.

First, ask yourself, in all cases, what skin does this fellow have in the game? For example, where does the funding come from? Is a politician supported by Wall Street or Soros or whatever? Is a Catholic apostolate — or media personality — supported by schismatic groups or, perhaps, a few very wealthy donors who pull the strings?

Where did the money come from to begin the operation (whether it's a campaign for office or a Catholic venture)? Did the politician or Catholic person put up his own money, making him personally invested? Is the politician or Catholic person or outfit personally profiting from their messaging, or are they reinvesting that money back into their effort to better the world and humanity?

It isn't sinful, immoral or uncatholic to ask these questions — to wonder these things — especially if you start to see a divergence in words from actions. Faithful Catholics in the Church and the world of politics need to ask a lot more questions and be a lot more suspicious-minded.

Too many have been conditioned to feel that suspecting something bad is afoot or making judgments in the material order is a bad thing. Being suspicious of evil and making correct judgments about it is how you get to Heaven — by avoiding the pitfalls. And that's not Church Militant saying that, it's Church Militant repeating what Our Blessed Lord said.

Abandon this stupid anti-Catholic notion that "nice" wins the day. The word "nice" never once appears in Sacred Scripture. Being "nice," in fact, is a sure path to Hell. 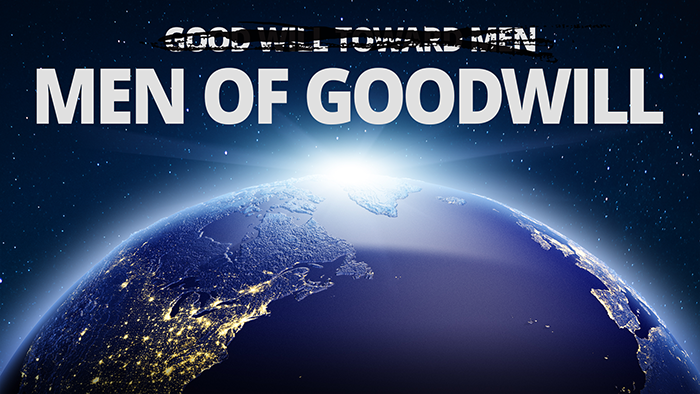 Men of Goodwill
Must love the truth.