A person needs 'goodwill' to turn from evil to good.

Let's begin this by saying that polls about how Americans are going to vote are less and less reliable, and there are two major reasons for that.

One is that technology, meaning cellphones, has made old methods extremely unreliable. In fact, it's giving professional polling companies fits as they try to figure out a new methodology that's more reliable. So far, they've had not much luck.

But the other reason is many of the polls are simply crooked — deliberately skewed to produce a headline that's sensational and usually against Trump or conservatives.

There's no shock there, certainly. Take for example The Washington Post-ABC News poll about a week before the 2016 election that showed Hillary demolishing Trump by 12 points. Everyone in the political and media world looked at that poll in complete shock. After deeper analysis, it was revealed that the polling had massively overrepresented Democrats. So, of course, Hillary would have outperformed Trump.

However, there is another type of voter analysis that gets little attention but may, in fact, be more reliable, even if it is somewhat more anecdotal. It's "conversion" analysis, and owing to Trump "numbers guru," 44-year-old Brad Parscale, there is actually hard data.

Trump is creating political conversions because underlying those politics is the necessary spiritual quality of goodwill.

This should have the Party of Death very nervous, and faithful Catholics — backing the most pro-life, religious liberty-supporting president in U.S. history — very happy.

It's a deep dive into who the people are, coming to Trump rallies. First, that crowd is not necessarily who you might think it is. In fact, politically speaking, it's pretty diverse.

As an aside, the Party of Death candidates can't really employ this strategy because, frankly, they don't really have thousands showing up to their rallies — only hundreds for the most part, in fact, if they're lucky. Every now and then they get a rally here or there that has a few thousand, but for the most part, the crowds — if you could call them "crowds" — are too small to render any kind of large scale analysis that would be helpful.

So who's coming to Trump rallies? Well, let's look.

First, more than 20,000 people attended the Trump rally in Milwaukee, Wisconsin last month. Based on the data collected, get this: 57.9% did not have a history of voting for Republicans. Almost 20% didn't even vote in the last election, and that is very disturbing news to Democrats.

But Milwaukee isn't some singular example. This is going on every time Trump holds a rally.

At the Toledo rally a couple of weeks later, almost a quarter of the crowd were Democrats. Another 20% were self-identified independents. That's almost half the crowd not identifying as republicans.

In Battle Creek, Michigan at that rally, a stunning one out of six attendees had not voted in any of the last four elections.

Twenty percent of the attendees at the rally in Hershey, Pennsylvania were Democrats, and a further breakdown reveals that 18% of them were non-white.

And notice not just the huge crowds, and not just the demographic breakdown of the crowds, but where these rallies — with these-sized crowds with these particular attendees — are: the battleground states of the Midwest. That's what has the Democrats freaking out.

If you are in favor of killing children, having your health insurance taken away along with other people's guns, opening the borders and draining the coffers to pay for the flood of illegal immigration, then you have got to be getting more and more depressed right now.

However, if you are a faithful Catholic who believes that human life has a right to be born, that you shouldn't be dependent on government for the rewards of your labor, that you have a right to defend your life and the lives of others, that justice should dictate how tax dollars are doled out and that a nation has a right to its borders — which, for the record, are all Catholic teaching — then you should be feeling pretty good.

The interesting thing in all this is because Trump is so far out there, so open about what he believes and the policies he pursues, anyone drawn to him knows exactly what their worldview is.

Trump is creating political conversions because underlying those politics is the necessary spiritual quality of goodwill. Recall that over the night skies of Bethlehem, the angels did not sing just "peace on earth," but explicitly tied it to the necessity of having "goodwill."

Goodwill is, at its core, a willingness to embrace truth — a desire to embrace truth. Pontius Pilate did not have goodwill. He denied there even was such a thing as truth, even though Truth Himself was standing right in front of him.

What is happening with these political Trump converts is just that — he is appealing to their goodwill and it's resonating with loads of people.

People of goodwill respond to virtues like truth, justice, fairness and so forth. Those of bad will or ill will do not. Bad-will people despise the truth. Justice never even appears on their radar. And this almost spiritual reality is translating into political conversions for Trump.

Church Militant is paying extremely close attention to this race not just for the political aspect, but more importantly because it is the centerpiece battle of a great spiritual war going on in America.

When topics like killing children in the womb and even infanticide are on the table, you bet it's a spiritual war. 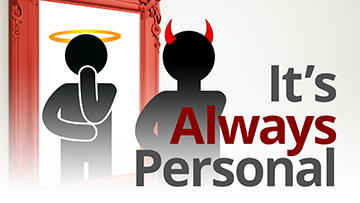 It’s Always Personal
It just depends on what person you're talking about.