A Plate of Hate

With a big helping of truth.

It's hard to recall a time in the life of the nation when religion and politics have been so bound up together in such a slugfest.

Large swaths of the body politic have been invaded, poisoned really, while the same is true in the religious sphere. Everywhere you turn today, you see this — a war in politics and a war within religion, specifically Catholicism.

Faithful Catholics often have more in common politically speaking with Republican Protestants, and the dissident crowd of Catholics may as well be running for the Democratic nomination because they sound just like them.

Case in point — look at the National Prayer Breakfast last week. There sat "Catholic" Nancy Pelosi, who like Mitt Romney, uses her religion to bludgeon President Trump. But the straight-talker was having none of it, and he gave it to her with both barrels about her hypocrisy. It was sweet watching the poor old thing sit there tooling with her dentures, or whatever that weird mouth thing is she has going on, and take it.

Ah, but another person was having none of it — sodomy supporter James Martin couldn't wait to get in on the action, breaking a few fingernails undoubtedly as he tweeted furiously. Martin was so indignant that the president would use the occasion of a prayer breakfast to call out the religious hypocrisy of a phony Catholic that he just couldn't stop tweeting.

When child killers are cheering you on ... it's time to reassess your 'faith.'

Scanning over Martin's 666 million tweets, we couldn't find one where he takes Pelosi to the woodshed for murdering children. But Trump calling out her hypocrisy? Well, that simply is the living end — intolerable, indecent.

Be very cautious. The lefties go on and on about religion much more than they are given credit for and always in a morally superior way, like Nancy charging back at the reporter a few weeks back, slamming him for asking if she hated Trump. Arranging her mouth, she stormed back to the podium and held up her Catholicism as proof she doesn't hate anyone. Whatever.

Peter Buttigieg can't seem to shut his mouth about the Bible and religion and moral rightness as he romps in his bed with a civil "husband." And Mitt Romney — yes, a member of the Left — was so informed by his faith in God that he had to break ranks and vote for one article of impeachment. It was so noble, so regal, so traitorous.

When child killers are cheering you on — when those who would destroy the very culture that has allowed your nutty religion to become as wealthy as the World Bank, not to mention you personally, Mitt — then it's time to reassess your "faith."

It's hard to tell if Mitt actually is a fool, or was just being played for one, but the religion thing is pathetic as an excuse to vote the way he did. It was so high-minded, so thoughtful and reflective, so disturbed in conscience. Whatever.

Might his disturbance have been the result of Trump passing him over for Secretary of State? Or was it because of a few presidential tweets taking him to task?

Here's the problem for the Left — the rage they vent against Trump.

He speaks plainly and clearly. He calls them out for their destruction of a nation, a culture and a way of life. He probably had no idea when he came to Washington with a plan to drain the swamp, just how intensely and boldly the swamp would fight back.

But these swamp monsters are more like shapeshifters, having the ability to transform into whatever they need to at any given moment. One instant they are hacking up babies and the next they are on their knees, transfixed by a heavenly vision of some sort.

It's hard to get a read on them. Buttigieg for example — who speaks about the Bible so frequently, folks have taken to calling him St. Peter — has somehow managed to paint a picture that the Bible embraces sex between two men as holy. His theology about God destroying Sodom, which his lifestyle is named after, would be an interesting listen.

He gets his theology from James Martin, as he revealed in an interview about who has been influential in his life. James Martin helping a former Catholic civilly married gay man whose father was a communist at Notre Dame accept his perversion as a good and holy thing — that also helps make Buttigieg a good selection for leader of the free world.

Man, you cannot make this stuff up.

Trump got the heckles and catcalls for serving up a "plate of hate" at the Prayer breakfast, but the meal itself was a wake-up call to all who care about the true supernatural virtue of faith — that these offspring of the serpents will use even religion to help destroy a nation.

Trump is on to them, and there's no turning back. 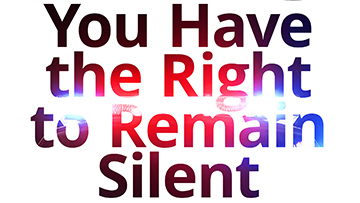 You Have the Right to Remain Silent
And you can pay for your own attorney.