Archbishop Viganò has come right out and said that a corrupt mafia is running the Church.

That was just one in a string of nuclear charges he set off in his recent interview with The Washington Post.

The full interview is well worth the read, hands down. But we would like to concentrate this Vortex on one specific area the archbishop zeroed in on: the failure of the media to fully expose all this current evil.

Here is what he said in response to a question about  how he thinks the media have done so far investigating all this: "With few exceptions, and those belonging to peripheral organs, the media have failed to tackle the 'crime behind the crime' and put the obvious questions to the obvious people."

He went on to say, "Journalists should be digging for the facts, interviewing the victims, following the money and promotion trails, and uncovering the corrupt networks."

When I read those words, I was deeply moved. First of all, Church Militant, in comparison to giant secular media outlets — as well as those supported and promoted by a corrupt hierarchy — Church Militant is a peripheral organ.

A few million people each month consume our content, but that is far less than the hundreds of millions who see and read the leftist propaganda of the mainstream media, as well as the public relations machine of the Catholic establishment media.

I'm going to put this question right out there, as a man who has been a professional journalist my entire life, with very minor exceptions, is there another entity in the Catholic media world who has done what Archbishop Viganò says needs to be done more than Church Militant?

I was deeply moved because here, from the shadows from his hiding place, was a complete and total vindication of all that we do here from the very man who sees everything going on in the Church.

And not just vindication for reporting for the last year, but for what we have been reporting for nearly 10 years now and have been crucified for by multiple bishops and their staffs and their sycophants, that the institutions of the Church are controlled by a corrupt mafia fueled by a homosexual current.

We have been shouting that from the rooftops since Obama went to Notre Dame in 2009.

We said in multiple reports from Rome and the Vatican, from all over the United States in dozens and dozens of talks, in hundreds of Vortex episodes, in scores of various investigations we have done over the years.

We don't care about being pilloried for reporting facts. We have a very thick skin.

What we care about is that the motivation behind the attacks, even from fellow Catholics in the establishment media, has been to keep the truth from being revealed. Sorry, but we don't play that.

As Viganò himself said in his original testimony last August, we have to stand before Almighty God when we die and give an account of what we have done, but also what we have not done.

That goes for every one of us, including current influencers in the Catholic establishment media. Why do establishment so-called "reporters" get interviews with the various bishops? The answer is obvious.

The bishops know they will never get a hard question, a probing question, a follow-up question that lays bare a lie.

Can you imagine Donald Wuerl or Blase Cupich or Joseph Tobin sitting down for an interview with Church Militant? The entire agenda would be exposed instantly, and they know it.

Heck, James Marin would not even agree to a debate with us, which we have extended multiple times. Three times he told Fox News he would not appear on air with me when producers proposed it.

Church Militant will never back off telling truth, no matter how many people don't like the style, no matter how much filth is revealed. What is being covered up is resulting in death — death of the body and the soul.

Homosexual priests, active in their mortal sin, are being kept in active ministry all over the country.

Your children and grandchildren are being exposed to these letches, these devils and the prelates who protect them. This death grip of evil, which has driven a good archbishop into hiding for fear of his life, this death grip which is destroying souls must be exposed and defeated.

What Viganò says is true. Every single point he has put forward has been proven true.

And among the "peripheral" media organs, Church Militant is devoted to the investigations, asking the hard questions, following the money trail, getting our hands on the document.

The Faith is being twisted and perverted, and any Catholic who has a hope to attain eternal life had better step up right now at this time and place in history.

Let the consequences be damned — which is eternally preferable to being damned ourselves. 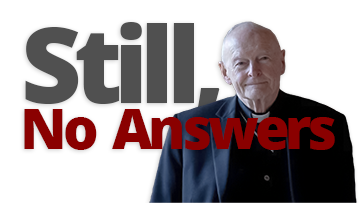 Still, No Answers
And the fires of Hell await the silent.