They do not care for the Church, only for themselves.

So Bp. Robert Barron has really gone and stuck his foot in it this time. Especially noted for speculating that no one ever goes to Hell, as well as telling Dave Rubin that Catholics should not try to legislatively overturn gay marriage and refusing to level with Ben Shapiro about the necessity of Christ for salvation, he has now added to his list of cowardly statements that bishops have no obligation to defend Catholic art and statuary from rioters.

He elicited a social media meltdown last week when he felt the need to answer Catholics calling out a statement by California bishops addressing the statue attacks by rioters. The original comments essentially said, "Woopty Doo. Another bishops' statement. What are you going to do about it?"

In response, Barron penned an article and punted, saying in essence, "It's not the bishops' job. It's up to you, the laity, to work things out in your own sphere, just like Vatican II said, don't you know." Well, the sheer cowardice and hypocrisy of that very revealing statement opened the floodgates against the celebrity prelate.

Loads of people — fed up with the lies, duplicity and self-absorption of the U.S. hierarchy — let him have it with both barrels. So his inane response does merit a response, but before we give one, recall that Timothy Cardinal Dolan once introduced Barron to the New York media as "the next Bp. Fulton Sheen."

Sure, because everyone can imagine Sheen staying quiet during a time like this with images of Our Blessed Mother being defaced and statues of saints being pulled down. Even statues of St. Michael have come under attack from Black Lives Matter and Antifa. But remember, Dolan is the cardinal who also brought active homosexuals into the St. Patrick's Day Parade, so take his recommendations for what they're worth.

This idea that bishops should just issue statements and not actually do something is ludicrous.

If Barron really thinks bishops should just write statements and stay out of actual physical participation in public stuff, why didn't he tell El Paso bishop Mark Seitz to stop his participation when the man knelt down with a BLM sign, signifying support for a rabid anti-Catholic group? Why didn't he tell the social-justice bishops who went down to the U.S.-Mexico border to offer Mass and make a political statement by distributing Holy Communion through the border fence?

Why didn't he tell San Diego bishop Robert McElroy to stand down as he whipped a crowd into a frenzy at a liberal gathering, telling them they all had to become "disruptors" of the Trump presidency? Why doesn't he call out his own bishops' conference for distributing charitable funds to some of the groups actually causing the violence in the streets?

For that matter, why didn't he offer a correction to Dolan for forcing the St. Patrick's Day Parade committee to accept open gays advocating for same-sex "marriage"? Every one of those actions by bishops goes way beyond just a statement. Heck, Wilton Gregory ordered his priests in D.C. to attend what amounted to an anti-Trump rally, thinly disguised as a rally against racism.

Barron was silent there as well.

He never offers a word of fraternal correction to Pope Francis, whose entire pontificate is nothing but one big Marxist, social-justice initiative. He never mentions any of those bishops or the pope stepping out of their sphere. Tsk, tsk bishops — Vatican II would not approve.

And turning to Barron himself — does he not deem his own celebrity personality waxing on movie reviews as "out of his sphere"? This idea that bishops should just issue statements and not actually do something is ludicrous. Pope Leo I went out to face down Atilla the Hun and ward off an attack against Rome in the fifth century. But more important is what Barron's sniveling reveals about bishops in general: Too many of these men are simply virtue-signaling freeloaders. They take your money, then refuse to defend the Faith, or even its symbols.

Barron, do the faithful Catholic world a favor and just stop with your pontificating.

But they'll hop into bed with Marxist-Democrat causes faster than they can kick off their heels. It's probably a little much, however, to expect any defense of saint statues from these men, when you think about it. They refused to protect the actual bodies of teenage boys from sex abuse. Why would they defend a statue of a body?

Likewise, every year, millions of actual bodies of babies are destroyed through abortion, and they don't even issue any of their precious statements about that! Why would they become forceful about stone and granite while the actual bodies of children are so meaningless to them?

Barron, do the faithful Catholic world a favor and just stop with your pontificating. Every time you open your mouth, you just reveal more of your own inadequacy and cowardice to deal with straight-up truth. Your interest is the institution first — not the souls or bodies in it. In that, you certainly do speak on behalf of your brother bishops. 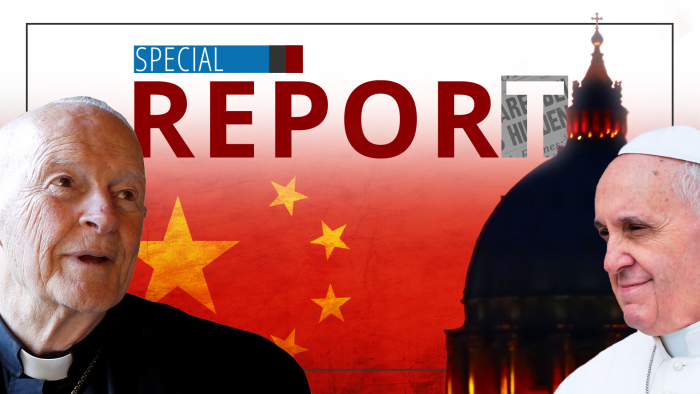