Creature of the Swamp

A situation is exploding in the diocese of Rockford (Illinois) that is revealing, once again, the corruption of the hierarchy. The bishop there is David Malloy, a swamp creature like so many other bishops in the United States.

When parish assignments for the diocese came out recently, there was a conspicuous absence of one priest: Fr. James Parker. He's been pastor at Holy Cross parish in Batavia, Illinois, for seven years and, by all accounts, has been a splendid priest. In fact, "he's the holiest man I know," according to what one parishioner told a local newspaper.

He's a man of deep prayer who is dedicated to the Rosary and in instructing his flock in the true Faith and leading them to Heaven as much as he is possible. Of course, Bp. Malloy says we can't have any of that. After all, a congregation that is insufficiently "woke," that prays a lot and has reverent liturgies is not in keeping with the Church of Cupich. Good grief, the next thing you know, they'll actually be believing in the Real Presence.

So why would Malloy be of such a mind? Well, check out his pedigree, and you will get the answer. He is, as we said, just another in a long line of swamp creatures emerging from the "modernist swamp" of the Church that has produced so many homosexual, dissident, compromised or otherwise weak men that the Church in the United States has essentially served up, except for a few outposts (such as in Batavia).

No arena is safe from the great spiritual war that is the legacy of the Fall of Man in the garden.

Malloy fits the bill perfectly. He was ordained by Rembert Weakland, the notorious archbishop who had a homosexual lover for years (who eventually blackmailed Weakland to the tune of almost half a million dollars). Then a considerably younger blackmailer (Paul Marcoux) outed him anyway on ABC's Good Morning America in 2002.

Malloy entered seminary and was almost immediately pegged as "bishop material" and shipped off to Rome to study at the North American College (NAC). The NAC was not only the training ground for future bishops but was also a notorious hotbed of homosexuality. Malloy came back from the NAC, was ordained by Weakland in 1983 and was almost immediately put into the swampy environment by Weakland for being made a bishop.

He checked all the correct boxes for chancery assignments as far as the needed resume requirements. Under Weakland's quarter-century reign, the diocese of Milwaukee was a homosexual clergy playground. It despised anything traditional in the Church and was full steam ahead with the modernism that has plagued the faithful for over half a century.

So when Malloy became a bishop in 2012 and was sent to Rockford, he brought all that anti-traditional mold with him. In 2017, he forbade the Novus Ordo Mass being offered facing God and went a step further, clamping down on any offering of the Traditional Latin Mass in Rockford without his permission.

This flew directly in the face of Pope Benedict's instruction that priests didn't need a bishop's permission to offer the Latin Mass, but the clever canon lawyer that he had been trained to be (with the money of the faithful) twisted the pope's words and issued his edict: No ad orientem and no Latin.

But Malloy and his modernist agenda have run into a bit of a buzzsaw as Fr. Parker and a surprising number of other mostly younger priests have demonstrated their love for the traditional expression of the Faith — which Malloy and his fellow modernist bishops around the country despise.

And a problem here for Malloy is that the people at these parishes have embraced tradition, and they are not happy at all with his punishing of Fr. Parker for it. When news spread from Father that he was being yanked out as pastor of their parish, hundreds gathered on very short notice to join Father in his daily hour-long Rosary to support him and oppose the bishop's punishment.

And, yes, it is a punishment. Father was not just canceled as pastor, effective in a little over a week, but he was also not given a new assignment, not provided a place to live and not allowed to meet with the bishop to discuss any of it.

When that news spread, people were outraged and Malloy started losing control of the narrative, so he published what amounted to a pack of lies to cover his ill-treatment of Fr. Parker. He denied everything, including that Fr. Parker was not allowed to meet with him.

But, as the Irish say, Fr. Parker did the bishop "a thick one" and issued his own response to the bishop's response, setting the record straight. Yes, Malloy had lied to his diocese, pretending this was all somehow Fr. Parker's fault. Malloy would not meet with Father because Father had brought a well-respected and very effective canon lawyer with him to his scheduled meeting with Malloy. But once Malloy knew there was a canon lawyer, the bishop refused to meet with them and left them sitting in the waiting room.

Back in 2019, Malloy became the USCCB's Chairman of the Committee on International Justice and Peace, a resume padder, in short. In general, Malloy:

And yet, this "bishop for justice" denies justice to one of his own priests and issues statements full of lies to smear the priest.

As more and more tradition-minded priests are speaking up and legitimately rebelling against modernist prelates, what we are seeing around the country is that the homosexual-friendly bishops are attacking back. Good priest after good priest is being maligned and sidelined, smeared, lied about and targeted by the modernist bishop crowd.

But because the climate of Trump (along with the China virus) has given rise to many good people finally speaking up, challenging the status quo and confronting evil by saying and preaching the truth, what is going on now is a classic case of the Empire Strikes Back — a ruthless attempt to put down what it perceives as a rebellion within the borders. After all, that's what we see playing out in the political world. Why would it be so strange to see it playing out in the Church world as well?

No arena is safe from the great spiritual war that is the legacy of the fall of man in the garden. When you understand the really big picture, nothing is unclear. Satan uses those in his control to bring about destruction in the political order, the theological order and whatever other order there is. He is only successful, however, insofar as men deliver themselves over to him. By their fruits, you will know them — straight from the mouth of God Himself, by their fruits.

The fight for control of the Church is in full-blown violence right now. Step up.

The moment of the laity has arrived, my fellow Catholics. All these good priests must be supported, protected and preserved in their priesthood. And if that means calling out wicked men who happen to be bishops, then so be it. Pray they convert, of course. But understand the big picture. They are villains, not their office, but they must be exposed and opposed.

The fight for control of the Church is in full-blown violence right now. Step up. It's the old establishment, pro-homosexual, theologically malformed, crude swamp creatures posing as something they are not versus those ill-equipped, scattered, unorganized, largely younger, inexperienced and even somewhat disillusioned faithful. It's a David vs. Goliath moment, which means we have them exactly where we want them.

The ball is in Malloy's court now. Let's see if he continues lying. 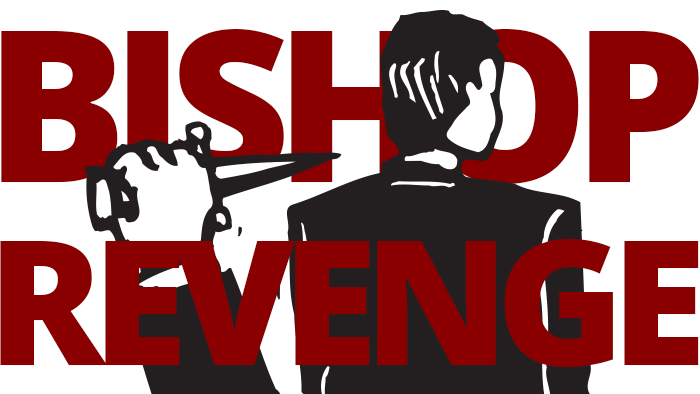