Pray for storm to be calmed.

This Vortex is coming to you live from Church Militant HQ here in Detroit following up on our breaking news over the weekend, concerning the declaration that the Argentine bishops' interpretation of Amoris Laetitia is now to be treated as "authentic Magisterium." The news is of course extremely troubling to many Catholics — scholars, theologians, canonists, clergy, as well as everyday Catholics in the pew.

But if we'd like to address this on a different level. What has brought about this supreme critical moment is the underlying challenge to the Faith. While this may appear to be a crisis regarding the papacy, we'd like to point to something even more critical. Whatever the troubling and disturbing aspects of this involving the papacy and Church teaching, the Holy Spirit will guide and protect as He always has.

What, however, is even more critical is that this is all the result of a loss of belief in the Real Presence of Our Blessed Lord in the Eucharist. With so many clergy and members of the hierarchy so anxious to distribute Holy Communion to those in an objective state of mortal sin under the guise of "mercy," there is a much more pressing issue at hand. It may, in fact, be the case that in protecting the Church and safeguarding the Deposit of Faith that the Holy Spirit Himself has allowed this crisis moment to be reached — part of Divine Providence.

The slow degradation of belief in the Real Presence over the past decades is the direct result of a loss of supernatural faith by members of the hierarchy. Overwhelming majorities of the laity no longer believe in the Real Presence. This cannot come as a surprise when one stops and takes into account the enormous numbers of abuses and sacrileges and missteps regarding the liturgy that have become commonplace in the Church.

From the turning around of the altars to face the people, to the removal of the tabernacle from the center of the sanctuary, to reception of Holy Communion in the hand, to the lessening of Eucharistic processions and the almost ignored prayer of Adoration, to a woeful lack of catechesis emphasizing the Real Presence, to the allowance of reception by notorious public sinners like so-called Catholic pro-abortion politicians, the current push for "shared Communion" with Protestant congregations that reject the Divine Reality to support for the notion that the Blessed Sacrament is "Bread for the Journey" for those in mortal sin which it can never be.

All of this and much more, step by step, has served to erode faith in the Real Presence. And now we have arrived — perhaps thankfully — at a moment of decision whereby the Church must step forward and in a loud declaration of faith once again assert in the most clear and striking and unambiguous terms the Divine Truth that Jesus Christ, the Eternal Logos, the incarnate Second Person of the Blessed Trinity is really, truly and substantially present, Body, Blood, Soul and Divinity under the appearance of bread and wine.

For 50 years now, too many members of the hierarchy and clergy have allowed belief to wane by their actions of supporting abuses in the liturgy which is centered around the Real Presence. We have arrived at this crisis precisely because the even more pressing underlying crisis is the vast majority of the members of the body of Christ now reject or are indifferent to the actual Body of Christ on our altars and in our tabernacles. This has been brought about by first a lack of faith in the Real Presence among members of the hierarchy.

They have turned the Church into a giant social justice resource center and shuffled the Blessed Sacrament off to the side. They have turned the attention of the faithful toward the caprices of man and taken the eyes of the faithful off the Divine and now the natural consequence of betraying the Faith is at hand. The Church is shrinking dramatically for the very reason that the source and summit of the Faith — the Real Presence of Our Blessed Lord — has been neglected, replaced with a man-centered liturgy, a man-centered, feel good protestantized catechesis, corresponding poor formation of seminarians, a rebellion among religious, and a great apostasy among the faithful.

Committed and faithful Catholics have been growing in concern and corresponding desire that Heaven intervene and correct course. What we are witnessing coming to a head now just might be the beginning of that Divine correction. In centuries past, as heresy and crisis buffeted the Church, things were always brought to a head and that critical moment became the opportunity for spiritual sanity to be restored. The Church is not off the rails — that is not possible — but too many of her leaders are.

In response to all of this, we'd like to make an appeal that every Catholic hearing this or talking to others about this make every effort, as your daily commitments allow, to get in front of Our Blessed Lord either in an adoration chapel or before Him in the tabernacle as soon as possible and pray in all earnestness that He awake in the boat and calm the storm.

However, Heaven goes about calming the storm is for Heaven to decide. But it is critical that those who do believe in Our Lord's Real Presence in the Eucharist get in front of Him as soon as possible and plead for Him to intervene. He is there waiting for you to call on Him to intercede. This crisis can be turned into a powerful moment of intercession whereby, once again, Our Blessed Lord proves His might and power.

Do not tell Him what to do or how to do it. Merely, plead before Him. This appeal in the midst of the storm will not be greeted with the response "O Ye of Little Faith." It will instead be responded to with the sweet words , "Your faith has saved you." 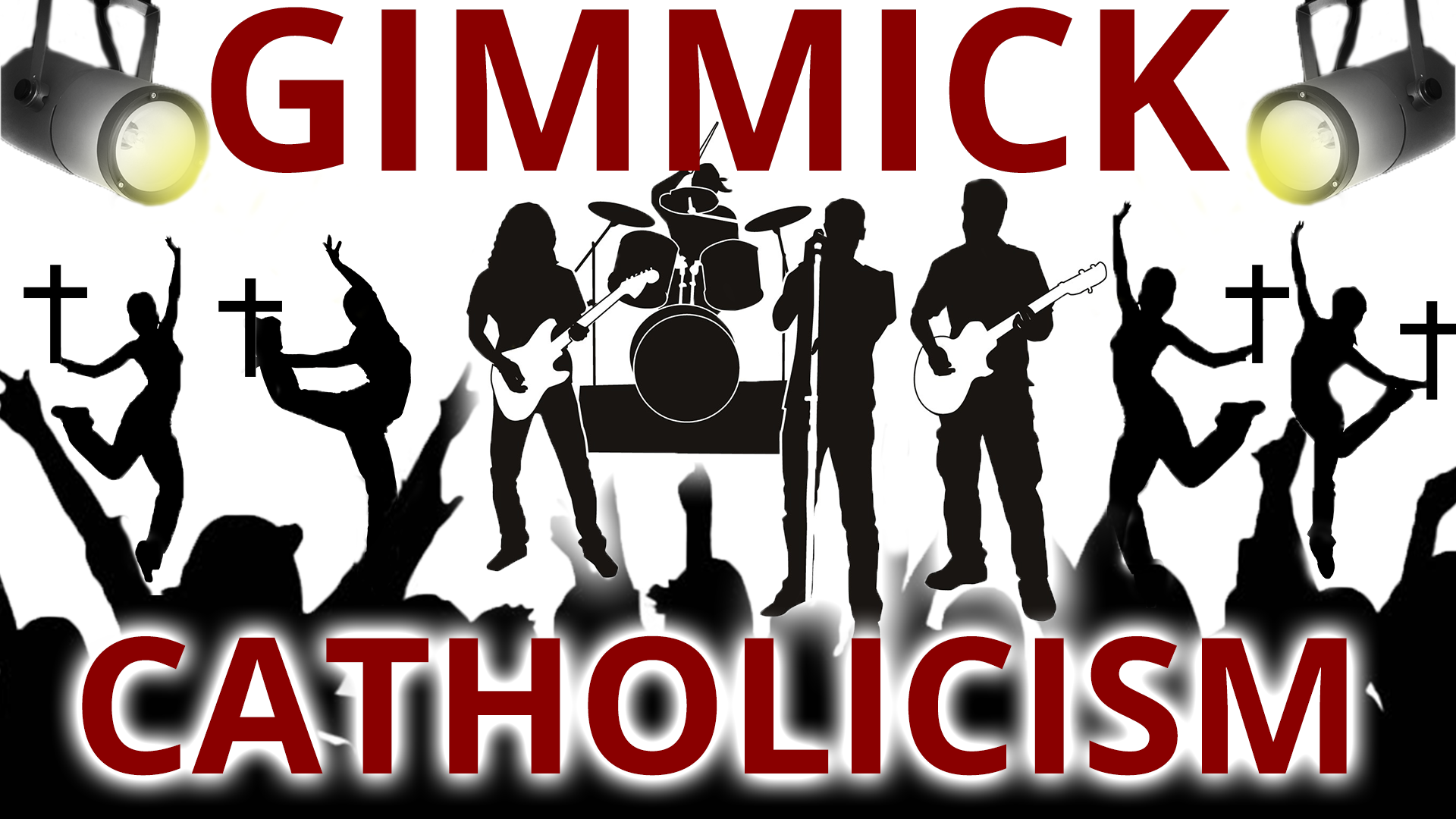 Gimmick Catholicism
It will never work.